The International Mission Board trustees’ presidential search committee announced Tuesday (Nov. 6) that the committee will recommend Paul Chitwood, 48, to be elected as the 173-year-old entity’s 13th president.

The vote to elect Chitwood is scheduled for the Nov. 15 plenary session during their IMB board meeting in Richmond.

A former chairman of IMB’s board of trustees, Chitwood currently serves as executive director of the Kentucky Baptist Convention, the state’s largest religious organization with 750,000 members in 2,400 churches and 70 associations. He has served in the role since 2011.

During his pastorates, he served as chairman of the IMB trustees from 2008-10, part of his tenure as an IMB trustee from 2002-10. His overseas short-term mission involvement includes work in Brazil, Peru, India, China, South Africa, Niger, Nigeria, Senegal, Kenya, England, Spain, Germany and Haiti.

“A decade ago, I had the privilege of working with IMB President Jerry Rankin, Clyde Meador, Tom Elliff, and David Steverson to pen the IMB’s vision statement,” Chitwood said. “While the wording was and is important, it simply captures the vision God has graciously given us in His Word. It’s His vision, and the culmination of the work that He has been doing through His church and, since 1845, through Southern Baptists. Our vision is unchanged: a multitude from every language, people, tribe and nation knowing and worshiping our Lord Jesus Christ.”

“It is so obvious that God has been preparing Paul for this role in so many ways,” said Rick Dunbar, chairman of IMB’s trustees and a member of the search committee from Madison, Miss. “Examine his work history, denominational experience, trustee background, educational history, leadership and team-building history; hear his heart for missions and the Lord, to be shared with the entire world; listen to his wife as she eagerly anticipates this role — and I think you will agree: We need him.”

Dunbar said the more the search committee talked, prayed and thought about Chitwood, “the more the entire committee has come together united in knowing he is God’s choice for our next president. He has the biblical foundation, a heart for missions and a proven track record of leading a big organization.”

“Little did the presidential search committee anticipate the meandering path that would be this search,” Pourciau said. “There were many twists and turns, but our commitment remained singular. It didn’t matter what path we took as long as we ended up in the right place. The right place is to locate and recommend to the trustees the person God had already chosen as the next leader of the International Mission Board.

“We are unanimously agreed that we have done just that in recommending to the IMB trustees Dr. Paul Chitwood as our next president,” Pourciau noted. “Dr. Chitwood is uniquely qualified to lead us into the next era of Southern Baptists reaching the nations. His missions heart and leadership acumen will serve us well in the years to come. I am eager to watch God work through him as he leads our international missions efforts. Yes, brothers and sisters, we did indeed arrive at the right place, and that right place is Dr. Paul Chitwood.”

As executive director of the Kentucky Baptist Convention, Chitwood has led the organization to a greater focus on strengthening local churches, planting new congregations, evangelizing the unchurched, and shifting more funding to international missions. He identified the need to move more Cooperative Program funds from state mission budgets to the Southern Baptist Convention budget and, ultimately, to the IMB budget. Last year, the convention reported more churches planted and growth in the number of Kentucky Baptists involved in volunteer mission work in Kentucky and around the world. 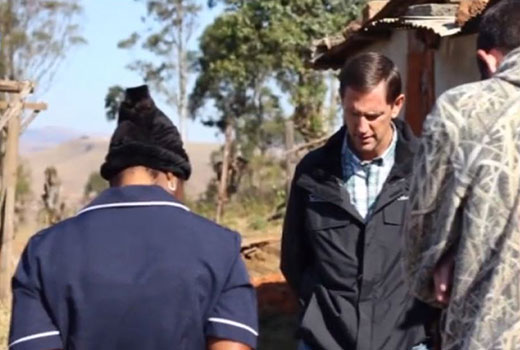 In consideration of leading the IMB, Chitwood has stated that he is committed to the organization’s next executive vice president being someone with significant mission-field experience. Chitwood has traveled extensively overseas in support of the IMB and worked alongside IMB missionaries, Dunbar said, which gives him a view into the missionary life and task but also makes him realize how much he will depend on men and women who have long-term overseas experience.

Duane Ostrem, an IMB field leader from Asia who served on the committee to provide a field-based perspective, said he is “very happy to join with the rest of the presidential search committee in recommending that Dr. Paul Chitwood be approved as our next IMB president.”

“Dr. Chitwood is passionate about missions,” Ostrem said. “He understands the workings of the IMB. He loves missionaries. His humble but strong leadership style will enable him to work well with our Richmond personnel, our field missionaries, and our Southern Baptist churches. His vision for the future will inspire and guide the IMB as we seek to make disciples of all nations.”

By Chitwood’s request, pending trustee approval, Clyde Meador will remain in the president’s office as interim executive vice president during the transition. Meador has served as IMB interim president since Sept. 27.

“I have known Paul for 16 years and have consistently been impressed by and thankful for his commitment to the spread of the Gospel to the ends of the earth, as well as his excellent leadership skills,” Meador said. “When Paul was serving as chairman of IMB trustees, he became an integral part of the leadership team, even to the point of having a significant part in crafting our vision statement that continues as a guide even today.

“Paul’s keen insight, leadership strength, commitment to the Great Commission, humility, and understanding of the lost world that lies before us, as well as unusual knowledge of the SBC, all combine to make him the ideal next president of IMB.”

D. August Boto, interim president of the SBC Executive Committee, noted “the first thing I did upon hearing the news was smile. I can think of no subset of Southern Baptists that should not be pleased to hear of Dr. Chitwood’s nomination.”

“We join in prayer for the full board as they meet next week to consider the search committee’s recommendation,” Boto said. “Paul loves missions. He has led out in support of the Cooperative Program as the most effective means of mobilizing our churches. His wide range of experiences has equipped him to see the value of every facet of Southern Baptist ministry and missions, from local church, through the association, and on to the state and national levels. I believe he can be confident of his convention’s support and continual prayer, for we can certainly be confident of his for us.”

Chitwood was Kentucky Baptist Convention president in 2005-06; first vice president in 2003-04; and president of the state pastors’ conference in 2002. He was chairman of the SBC Committee on Nominations in 2015-16. He also has served on several other state mission committees and in associational leadership committees. He has served as a trustee of Crossings Ministries, Sunrise Children’s Services, Kentucky Baptist Foundation, Oneida Baptist Institute, Baptist Haiti Mission, and Bridges to Nigeria.

A native of Jellico, Tenn., Chitwood is a 1992 graduate of Cumberland College (now University of the Cumberlands), where he has served as a trustee. He earned a master of divinity degree from Southern Baptist Theological Seminary in 1995 and a doctorate from the seminary in 2001. He currently is pursuing a master’s degree in nonprofit administration from the Mendoza College of Business at the University of Notre Dame.

Dunbar said, “As I have studied our IMB history and our past presidents, it is clear that God continues to build on the foundation laid down by so many.”

“I have served as a trustee under Jerry Rankin, Tom Elliff, David Platt and Clyde Meador,” he said. “They are all different, but I believe that each was called to this position with a unique perspective and giftedness, and we thank God for all of them. Paul brings a unique perspective also. He is a proven leader, motivator and mobilizer, he is committed to missions, and he gives his all to the pursuit of God’s will.”

Chitwood and his wife Michelle have been married for 25 years. Their family includes son Daniel, 22, and daughter-in-law Derrika; daughter Anna, 20; daughter Cai, 12; and a foster daughter, age 6, who they hope will soon join the family through adoption.

“Michelle, his wife, is fully committed to this role, and we see qualities in her that will complement Paul in the president’s role,” Dunbar said. “She is eager to be an active part and sees this as a calling for her also. She embraces the challenges this role presents. She sees their family’s role not as a sacrifice but an opportunity. She will be a great asset to the IMB. You will love her.”

On Feb. 12, 2018, former president David Platt asked trustees to begin their search for the next president of the mission entity. The trustees’ presidential search committee accepted presidential nominations through May 15. And a committee of more than a dozen trustees plus a former field leader have worked diligently since February. Trustees will vote on the recommendation of Chitwood as president during their plenary session, scheduled for Nov. 15 at 10 a.m. EST.

A digital press conference for media is slated for Nov. 15 from 2-3 p.m. EST, contingent on Chitwood’s election. Media interested in attending the Nov. 15 plenary session or the press conference should contact Julie McGowan at jmcgowan@imb.org and Jennifer Nix at jnix@imb.org by noon on Friday, Nov. 9. The plenary session also will be viewable via livestream.

The press conference will be accessible for media by WebEx, and it also will be broadcast on Facebook Live (@imb.sbc).

VIDEO: Paul Chitwood, in South Africa in 2015, tells about sharing the gospel with a dying woman and witnessing her come to faith in Jesus Christ.

— Julie McGowan is public relations manager for the IMB.