Messengers to the 198th annual meeting of the South Carolina Baptist Convention Tuesday morning adopted a $28 million Cooperative Program budget and approved a bylaw change that requires prospective trustees and Executive Board members as well as their churches to “affirm [in writing] and reflect in practice” the Baptist Faith & Message 2000.

At midmorning, 593 messengers were registered for the annual meeting, which is being held at Mount Moriah Missionary Baptist Church, a traditionally African-American church in North Charleston.

The proposed bylaw change prompted floor discussion among the messengers. Steven Owensby, pastor of Morningside Baptist Church in Spartanburg, asked how the new requirement might affect a nominee from a church that has a statement of faith other than the Baptist Faith & Message 2000. 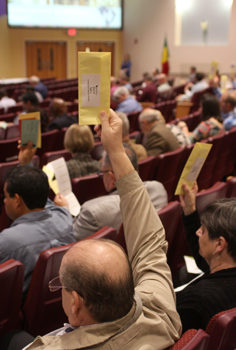 Bylaws Committee chairman Woody Oliver said that there is a difference between a church’s “affirming and reflecting in practice” the Baptist Faith & Message 2000 and “adopting” it as the church’s official statement of faith.

Convention president Marshall Blalock noted that while churches can choose to affirm and reflect in practice the Baptist Faith & Message 2000, requiring them to adopt it as their statement of faith would be a violation of church autonomy.

Speaking from the floor in his capacity as a messenger, Nominations Committee chairman Bryant Sims, who is pastor of First Mount Moriah Baptist Church in Greenwood and incoming SCBC president, endorsed the bylaw change. “This is deeply needed,” he said. Sims said that a church’s “friendly cooperation” with the SCBC, which in previous years was the standard under which the Nominations Committee operated, “is not enough to make sure our trustees and committee members are doctrinally accountable.”

Messengers approved the motion to amend the bylaw language by raising their ballots.

Messengers approved a Cooperative Program operating budget of $28 million, unchanged from last year. The budget commits 41 percent of receipts to the Southern Baptist Convention and 4.5 percent to the International Mission Board. The percentages allocated to the SCBC’s seven ministry partners (institutions) remain unchanged from 2018.

New this year, the budget permits SCBC officials to draw from the convention’s restricted and fund balance accounts in order to supplement funding for Executive Board ministries. The 2019 budget allows the convention to pull more than $1 million from the restricted and fund balance accounts to help fund $9.93 million in spending through the Executive Board ministries “Advance Plan” to help churches fulfill the Great Commission, as outlined by SCBC executive director-treasurer Gary Hollingsworth.

Tommy Kelly, chairman of the SCBC Executive Board, said the budget will fund a “very clear vision” for the state convention. “We are not a bank or a savings and loan,” he said. “We are to do the work of the kingdom. We need to take the gospel to all ends of the earth. I totally back this vision.”

In response to a messenger’s question, Budget, Finance and Audit Committee chairman Talmadge Tobias reported that the convention has $7 million in its unrestricted fund.

Messengers approved the budget by a show of ballots.