The 198th annual meeting of the South Carolina Baptist Convention will be held Nov. 13-14 in Charleston. 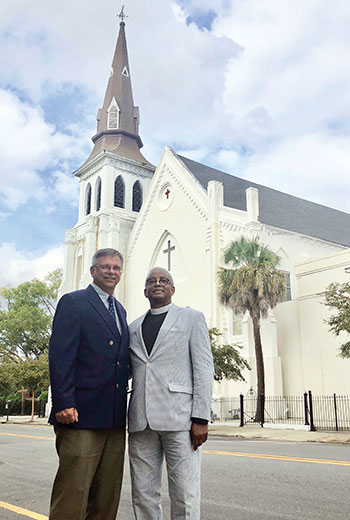 Marshall Blalock and Anthony Thompson stand in front of Charleston’s Emanuel AME Church, where a self-avowed white supremacist murdered nine people during a prayer meeting on June 17, 2015. Thompson’s wife, Myra, was leading the Bible study and was among the victims.

“The goal is to inspire us to build bridges over every barrier, including racial barriers, with the power of the gospel of grace in Jesus Christ,” said Blalock.

At their 2015 annual meeting, SCBC messengers adopted a resolution expressing appreciation to the murdered victims’ families, “people of faith,” for “responding … with grace and forgiveness” after the shooting. The resolution also noted the “multiethnic and multicultural unity” that developed in the wake of the shooting.

To register for the SCBC annual meeting, visit scbcregistration.org. To view the meeting schedule, visit scbaptist.org/2018-annual-meeting-schedule.

In addition to the annual meeting, the 2018 South Carolina Baptist Pastors Conference, under the banner of “Faithful to the End,” will be held on Monday, Nov. 12, also at Mt. Moriah Missionary Baptist Church.

The Pastors Conference starts at 9 a.m. Bennie Durham, a chaplain and deputy with the Greenville County Sheriff’s Office, will preside. Several South Carolina pastors are scheduled to speak. Also, Ken Weathersby, vice president for convention advancement with the Southern Baptist Convention’s Executive Committee, will speak during the Monday evening session.