The 300-or-so worshipers who arrived early at Charleston’s Emanuel AME Church on Nov. 13 were fortunate to find seating in the grand old sanctuary. The 400 others in the overflow crowd walked to nearby Citadel Square Baptist Church to watch the service on closed-circuit TV.

They had come to the Tuesday night worship service of the annual meeting of the South Carolina Baptist Convention. Marshall Blalock, president of the convention and pastor of Charleston First Baptist Church, had arranged for the SCBC messengers to worship at historic “Mother Emanuel” in keeping with his chosen theme, “Building Bridges.”

In the months following the race-motivated murders of nine people at Emanuel on June 17, 2015, Blalock’s heart was changed when he realized there was unintentional segregation in his own network of relationships. “The outpouring of love and unity that inspired the world has faded some over time, but the deep conversations over race can now take place,” he told The Courier a year after the shootings.

As Blalock welcomed worshipers to the Tuesday night service, he said, “I don’t know if we’ve ever been in a more sacred place. As we gather in Mother Emanuel Church, the place itself speaks to us of the power of faith in Christ Jesus. We’re in a place of safety because, while it’s where hearts were broken, it’s also the place where the life-saving power of God’s grace is.”

Blalock thanked Emanuel’s pastor, Eric Manning, and he introduced Anthony Thompson, whose wife, Myra, was leading the Bible study in June 2015 and was among those who died. Blalock also introduced the evening’s two other speakers: former Southern Baptist Convention president Ronnie Floyd, and Walter Strickland, assistant professor of systematic and contextual theology and vice president for diversity at Southeastern Baptist Theological Seminary. 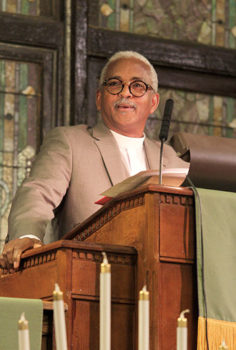 Anthony Thompson talks about the power of forgiveness.

Thompson, who is pastor of Holy Trinity Reformed Episcopal Church in Charleston, reminded listeners that all people need to be forgiven, “because the sin we bear is a burden.”

“Sin is a disease that eats at the hearts of all mankind. It is hatred, it is racism, it is discrimination, it is violence,” he said. “It causes divisions, it causes separation in our lives, in our families’ lives, our communities, our nation, and our church.

“But we can relieve ourselves of all those burdens with just one simple act of forgiveness.

Thompson then told the story of how he publicly — and unexpectedly, even for himself — forgave his wife’s killer at a bond hearing.

“I was looking at him, and I looked around, and it was like nobody else was in the room. I’m looking at him, and God is saying, ‘Son, I forgive you and my family forgives you. But we would like to take this opportunity to have you to repent and confess, give your life to the one who matters the most, Christ.’

“I felt the bitterness, I felt the loneliness of everything I felt about my wife and all that’s going on actually leaving my body,” Thompson said. “I felt this peace like none ever. I was light as a feather, and I realized that was the peace that passes all understanding.

“We have a lot of bad history in our lives among each other — slavery, racism, discrimination, separation between the races, even separation of worship on Sunday mornings. We can’t take back what happened in the past, but we can talk about the past so that we can come together … and admit the past and forgive and ask for forgiveness so that we can move forward, being the kind of church God wants us to be: a church of one body, one spirit, one Lord and one baptism and one God of all.

“Only forgiveness can bring about healing in your life. And it trickles on downhill to the life of your family, your church, your community, and then it trickles right into the nation.

“And I know, because one day I had to forgive Dylann Roof, the young man who killed my wife and eight other people right here at Emanuel AME Church.”

Floyd, whose emphasis during his SBC presidency was racial unity, used John 13:34-35 as his text (“A new commandment I give you, that you love one another …” ). 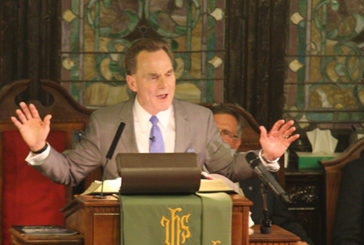 Floyd also stated flatly that “racism is an assault on the gospel of Jesus Christ.”

He recalled the SBC annual meeting of 2015 in Columbus, Ohio. On the evening of July 16, messengers had been on their knees praying for the country to have a spiritual awakening. Less than 24 hours later, he began hearing the shocking news coming out of Charleston.

“It was genuine grief,” Floyd said. “It felt like Satan had seen us on our face before God and said, ‘I’ll show you’.

“But you showed the world what love is,” Floyd said, gesturing toward Thompson. “Love is God’s way to build bridges.

“Southern Baptists, you are not known by your creeds, songs, doctrine, knowledge, achievements, dress, appearance or color of your skin — you are only known by His love and His love through you,” Floyd said.

“We need to bring some credibility to the gospel that we believe. We need to live it out.

“We need to stop letting our nation define who we are. Love is the one note of the true church.”

Strickland began by speaking of Emanuel Church’s “testimony to freedom” from both spiritual and physical oppression. “Emanuel has not allowed foiled slave revolts, arson or a massacre to thwart a vision for making Christ known and hastening the coming of His kingdom,” he said. 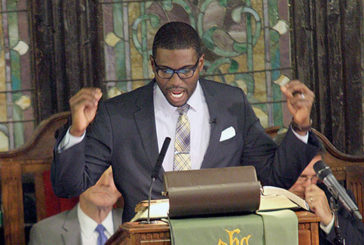 A Southern Baptist himself, Strickland admitted to being “confounded at what to say … in this building filled with a number of Southern Baptists, with our thorny past marked by the affirmation of slavery that sends reverberations into the present day.”

Christians are “those who lament any vestiges of brokenness that sin has forged in our lives and in our country,” he said. However, “we are stubborn, and we have a tendency to push away from God’s design of being unified in our diversity, and away from each other because of cultural unease, historical baggage or personal preferences.”

But Scripture offers hope, he said, citing Revelation 7:9-10 (“… a great multitude which no one could count, from every nation and all tribes …”).

“John’s vision does not function solely as a window into ‘the sweet by and by,’” Strickland said. “It is to call God’s people to live lives as those who actively are trying to manifest the riches of the kingdom in the present.

“My contention is that we’ve lowered the bar on our efforts to foster unity, because we’ve diminished the view of our Savior and His ability. We often look to a variety of superficial means to bring people together. We look to Jesus plus something else to bind us together, even amongst believers. But any time we add something to Christ for the purpose of unity, that thing takes the gospel captive. 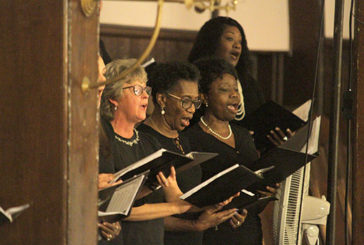 “Perhaps we have not been able to come together because we are not as spiritually mature as we think we are. As I see it, in our country the struggle to build bridges across the lines of race and culture is perhaps the premier litmus test for spiritual maturity in our time.

“I’m aware that I’m asking you to do something that’s supernatural, but we can’t keep dealing each other blows. At some point someone has to stand up and absorb the final blow to end the cycle of brokenness and hurt.

“But I’m glad that we have an example of someone who absorbed the blow. He was nailed to the cross. He suffered punishment that was not due Him so that others can live. He is victorious over death and all the effects of sin, including racism, bias, prejudice, bigotry, narrow-mindedness and discrimination.

“In our efforts to do His will now, it is not about achieving the goal, but about the work that is done on us in the process. The process makes us more like Jesus.