On Christmas Eve in 1968, Apollo 8 astronauts Frank Borman, Jim Lovell and Bill Anders orbited the moon 10 times. During that historic day, they photographed the earth rising above the moon’s horizon. “Earthrise” would become one of the most iconic images of our planet.

During their Christmas Eve lunar orbit, they read the first 10 verses of Genesis 1, which was broadcast worldwide to the largest TV audience in history up to that time. The first verse says, “In the beginning God created the heavens and the earth.” That verse seemed to take on a unique and memorable experience as it was read by the men who had traveled farther into space than any human beings before them.

On Christmas morning, the astronauts reached for their dehydrated meals, which they admitted were not a delight to eat. When they opened the food compartment, they were pleasantly surprised to discover three foil packages wrapped with green and red ribbon. Inside was real turkey, dressing, gravy and cranberry sauce, along with some small gifts from their wives. Borman said it was the best meal of the flight.

As they reignited their engine and left lunar orbit on Christmas day on their way back to earth, Lovell, to the delight of children everywhere, said, “Please be informed: There is a Santa Claus.” The crew landed safely on earth Dec. 27. 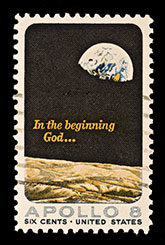 In 1969, the U.S. Postal Service issued a commemorative stamp featuring the “Earthrise” photo with the words: “In the beginning God … .” It was a different time in the 1960s, but the shift to a more secular mindset was already developing in the culture. Madalyn Murray O’Hair filed a lawsuit against NASA for the astronauts’ reading of the Genesis passage during the mission. In 1970, the Supreme Court dismissed her case.

Things have changed greatly since then. In fact, according to Pew Research, fewer Americans — even those who are Christians — hold to four essential truths presented in the Bible: the virgin birth of Jesus, the account of Jesus being laid in a manger, the wise men being guided by a star to Jesus and bringing expensive gifts, and the angelic birth announcement of Jesus to shepherds.

We are a much more secular society than we were then. The Christian faith is not welcomed today as it was back then. But we still have the same God and the freedom to worship and serve Him, particularly during the Christmas season.

Christmas is a time for believers to celebrate the incarnation — God becoming a man. Our celebrations should at least be as special as the Apollo 8 experience.

We at The Courier hope your Christmas will be special and meaningful to you this year. In adapting the words of James Lovell, please be informed: There is a Jesus Christ, and He is the living Lord!