Bryant Sims, pastor of Mount Moriah Baptist Church in Greenwood and the 2019 president of the South Carolina Baptist Convention, is only the second person in the history of the SCBC to have a dad who also served as president.

“It is something special,” the younger Sims said. “I plan to use the gavel [my father’s] church made for him when he was president. I was a bivocational pastor in Calhoun Falls when he passed away nearly 20 years ago.”

Horace Sims was 41 when he was elected president, and he died in March 1999. Bryant Sims is 44. In the year of his father’s death, he wrote that his dad was “my father, my pastor, my mentor and my hero.” 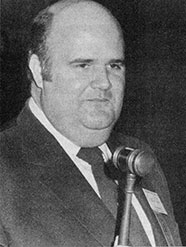 From the Nov. 25, 1982 issue of The Baptist Courier: Before he came to Spartanburg to preside over the SCBC annual meeting, Horace Sims Jr. (Bryant’s father) received a gavel from his congregation, Abney Memorial Baptist Church in Greenwood. Bryant plans to use his father’s gavel at next year’s annual meeting.

Bryant calls his wife, Melanie, “my partner in ministry in every possible way.” Daughter Brianna and son Jonah are both committed Christians who are engaged in evangelistic outreach and discipleship ministry with students.

During his year as president-elect, Sims contacted other state conventions to determine who had the best annual meeting. He concluded it was the Southern Baptists of Texas, and he borrowed some of their ideas to implement during his tenure as president of the SCBC. One unique twist he is working on in conjunction with the South Carolina Baptist Pastors Conference is to have the Pastors Conference begin on Sunday evening, followed by Monday morning and afternoon sessions. The annual meeting of the convention would begin on Monday evening and conclude with the Tuesday evening session. The Wednesday morning session would be eliminated. “I want to do away with a dedicated worship service and have a speaker at every session and some business at every session,” he said.

“I have not missed an annual meeting since I was 17 years old, but we have been losing messengers in recent years,” said Sims. “I want to give people, especially a younger demographic, a reason to be involved. I want our convention to be better and stronger.”

The 2019 annual meeting will be held at the new facilities of Anderson Mill Road Baptist Church near Spartanburg.

Sims said his theme for his presidency will be “Engage,” and he hopes to have affinity groups that meet following each session, where differing groups of South Carolina Baptists can encourage and motivate each other.

“Our closing session will focus on engaging younger people, and I have worked with our university presidents to allow Christian ministry majors to be excused from class and given extra credit for attending the Tuesday session,” Sims said. “Our Baptist collegiate ministers will also bring students, and we will have interviews with the university presidents during the closing session,” he noted. “It will be the most forward-looking session with the most contemporary music as we focus on church planting.”

He said his speaking schedule is already booked into 2020, mostly with smaller churches, and he wants not only to engage the culture with the gospel, but also to engage more churches to be involved in and support the work of the denomination. One of the ways he hopes to turn people back to more denominational identity and loyalty is to launch something like “Annual Meeting 101,” which will show “who we are: What is a trustee? Why have an annual meeting? What do we do? And how can you get involved?”

Sims hopes the convention will produce an undated video that can be used in future years to help rebuild a robust and well-attended annual meeting.

“I want to see the annual meeting revitalized. For that to happen, people have to be willing to change the way we do things and how we think about things,” he emphasized. “What I want to see happening in our convention is building affinity, engagement and community.”

After serving as president-elect for a year, Sims says, “I realize the office of president carries more responsibility and requires more time than I imagined.” He seems ready for the challenge.