After World War II, decorated Army veteran Jesse Whitley returned home and became a soldier for the Lord, serving as a Baptist pastor and preacher for more than 45 years.

It came as a surprise to Whitley, who faced combat action with the First Special Service Force against the Japanese in Alaska’s Aleutian Islands and against the Germans in Europe.

The Veterans Day ceremony was held at First Baptist Church in Pearland, Texas. Whitley lives in the Houston suburb with his daughter, Vicki Cumbie, having moved from Arkansas about a year and a half ago. 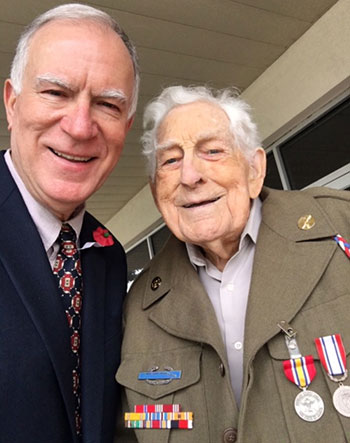 The FSSF garnered WWII fame for a 99-day period in 1943 when it operated behind enemy lines primarily at night, inspiring a 1966 book and a 1968 film based on the book, both titled “The Devil’s Brigade.”

In researching Whitley’s military record, Triplett discovered that the pastor had been “eligible for Green Beret status for approximately 10 years” but no one had been able to complete the process to formally recognize him. “So I made it a personal thing.”

With Whitley in his late 90s, “If we don’t get this done, it may never happen,” Triplett said. “It’s just time to make it happen.”

In his opening remarks at the Veterans Day ceremony, FBC Pearland pastor David Adams told attendees, “What is about to happen is a surprise to Jesse. He was told to wear his uniform today on Veterans Day, but that was all. Doesn’t he look great?”

He said he wasn’t expecting the outpouring of congratulations and well-wishes from U.S. senators and representatives; the Texas legislature; the governor of Alaska, whose father also served in the FSSF; Southern Baptist entity and church representatives; military and veterans officials; and members of the Veterans of Foreign Wars.

At the culmination of the event, Whitley received a Special Forces Tab and a Green Beret presented by Sgt. Justin Mayrant of the 19th Special Forces unit based in San Antonio.

“I can’t imagine me being this important to anyone,” Whitley said in the interview. “It made me feel humble. And I still feel humbled by that award. It was a thing that I’d hoped I would see when I came back to America. It took it a long time … and I thank God that people will get a chance to recognize that American soldiers out there — our servicemen — need our support.

“And I’ll tell you, they are worth every bit we can give them. And I thank God for the 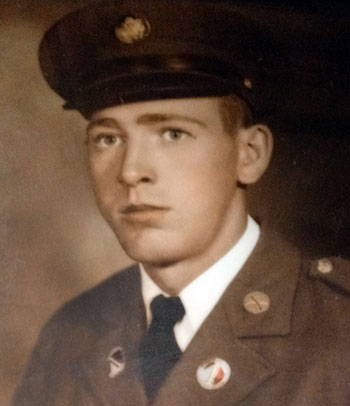 Jesse Whitley enlisted at age 19 in the Army in 1939 and served until 1945. During World War II, he served with the First Special Service Force, the forerunner of the U.S. Army’s Special Forces. (Submitted photo)

m and thank God for everyone who will support them.”

Triplett, a retired Kraft Foods executive, had known Whitley for about a year before the Veterans Day event.

When Whitley began attending the men’s Sunday School class, Triplett and other veterans in the class learned that Whitley “had fought in the war” and “that he had a Bronze Star,” one of the military’s top awards for meritorious service.

With Veterans Day approaching, Triplett said, “I thought this year it would be kind of neat to recognize Jesse…. So I met with his daughter and she gave me some information, a couple of pictures of some of the medals he had obtained from the military.

“As I began to see all this, I thought, this is a remarkable individual,” Triplett said. “And so I began to dig more and more into it,” also learning that Whitley had been a pastor of Arkansas Baptist churches for 29 years and an interim pastor for 17 years.

Despite putting “everything I could” into contacting military and veterans organizations on Whitley’s behalf, Triplett said, “I really didn’t get too far.”

But the process picked up when Triplett contacted the office of U.S. Sen. Ted Cruz of Texas. Despite being in the middle of the reelection campaign, “They took it under advisement and asked me for all the paperwork I had put together.” 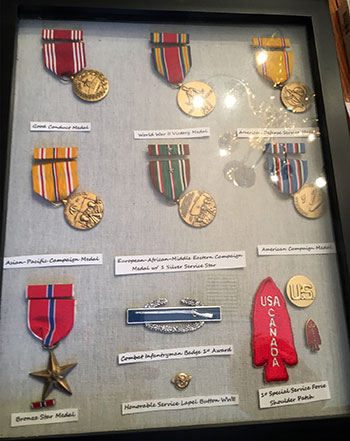 World War II veteran Jesse Whitley earned numerous medals as a member of the First Special Service Forces, one of which is a Bronze Star (bottom row left), which is awarded to recipients for heroic or meritorious achievement or service. (Submitted photo)

Over the next couple of weeks, with the help of Cruz’s office, the Department of the Army and Bill Woon, former executive director and historian of the First Special Service Force Association, Whitley was approved to be recognized as an official Green Beret.

In a phone interview, Whitley’s daughter Vicki Cumbie acknowledged that “It’s a great honor for his military service to be recognized. But it’s also wonderful to know all the people that have been ministered to under him and his ministry.

“When my dad came home, he gave his heart to the ministry. He spent the rest of his life preaching Jesus and preaching salvation. And believe me, he’s a salvation preacher.”

“He’s got a great military legacy and it’s an honor,” Cumbie said. “Also, his legacy is watching people get saved.”

— Tim Tune is a writer based in Fort Worth, Texas.