Courier Publishing has released an e-book edition of “Blessed Is the Man,” one of its more popular titles, and the author will donate a portion of the proceeds to help The Courier reach its 150th anniversary fundraising goal of $150,000. 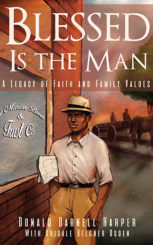 Don Harper, a retired Goodyear executive who wrote the book with Abigale Belcher Ogden in 2016, said he wants to support The Courier because of his close personal friendship with editor Rudy Gray and to express his appreciation for the role Courier Publishing played in helping him publish his first book.

“My wife, Gerri, and I are fairly new to the Southern Baptist family, as we moved here in 2007,” Harper said. “Dr. Gray and Utica Baptist Church embraced us as a family, quickly placing us in ministry and assisting us in our retirement transition. When Dr. Gray retired from Utica to lead The Courier, we committed to a long-term plan to assist in fundraising.”

“Blessed Is the Man: A Legacy of Faith and Family Values” is a loving tribute to Harper’s parents, punctuated with life lessons rooted in Scripture. The example his parents provided him and his 12 siblings grounded him in his faith and propelled him to professional success as a vice president with a Fortune 100 company.

Since “Blessed Is the Man” was first published, Harper has donated 10 percent of proceeds to The Courier, and he has given an additional 30 percent to two other South Carolina Baptist institutions. He plans to continue that practice with the e-book version of “Blessed.” Also, he says he will do the same with another e-book he played a key role in bringing to publication: “The Gospel According to St. Matthew,” a Bible study presented by the Oconee Bible Study. Both titles are available at Amazon.com, BarnesandNoble.com and other online providers.