Charleston Southern University’s new president has an unusual first name: Dondi. But it seems to fit, since Dondi Costin is not your typical university president.

As one would expect, he’s been decorated with academic degrees — five master’s and two doctorates — and he has taught as a professor (of aerospace studies). Costin, however, is also a decorated Air Force officer who recently completed a stint at the Pentagon as chief of chaplains.

A graduate of the U.S. Air Force Academy, he rose to the rank of major general during his 32 years of commissioned service, earning both the Legion of Merit award and the Bronze Star medal. In his role as chief of chaplains, he has led more than 2,000 chaplains and chaplain assistants in serving more than 664,000 active-duty airmen, Guard, Reserve and civilian forces.

Most striking, though — and likely honed through his decades of military service — is a passion for the mission and a commitment to serving those with whom he serves. That’s a core trait of any great leader. 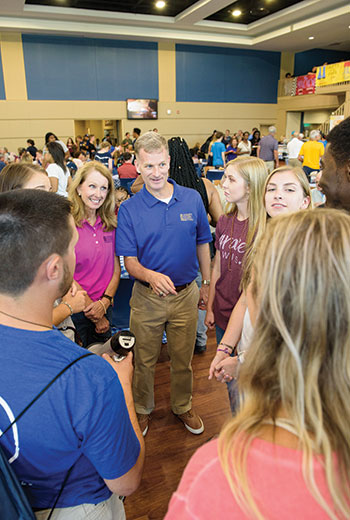 “One of the things that I loved about being an Air Force chaplain was, [my wife] Vickey and I were in what I have called the life-change business,” Costin said.

“Just like any pastor, it was a phenomenal experience working with people and seeing them come to know the Lord, seeing them grow in their faith, grow in their knowledge of God,” he explained. “The chaplaincy was that for us. We stood for religious freedom, and we also helped people understand who they are, why they were created, and how they could best serve the Lord in their context.”

So, naturally, when Costin was approaching retirement from the Air Force, he and Vickey began looking for a place where they could continue that mission for the rest of their days.

“We started looking for a place that was focused on the gospel, a place that would be investing in young men and women who were wanting to follow God and to be prepared for that,” Costin said. “Our motivation really had to do with the mission, and we found that the mission of CSU is just as real in person as its website led us to believe.”

For that reason, his transition from serving on an Air Force base to serving on a university campus really hasn’t been as difficult as one might believe, Costin said. From the chaplaincy perspective, he explained, his primary objective has been helping people discover and live God’s dream for their lives.

“I think people would be surprised at the vast number of similarities between an Air Force base and a college campus,” he added. “For one thing, the large majority of people on an Air Force base are hundreds of college-age students — first time out of high school, first time away from their parents — who are learning who they are,” he noted, observing that “the same thing happens on a college campus.”

Costin has also been very surprised and thankful to God that many of the leadership skills, attitude and mission-minded focus that he acquired as an Air Force officer have been easily transferable to a higher educational setting. 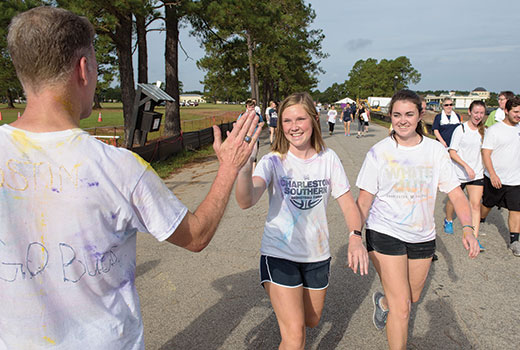 Covered in paint after a run, Costin greets students at the finish line for the annual Color Fun Run — a CSU homecoming tradition.

“In one sense, leadership is leadership,” Costin observed. “If you’re connected to an organization with a really strong mission and people who are really passionate about what they do … you can try to rally a team and inspire them to accomplish a mission.

“In the Air Force, that was not hard to do at all because the mission was so compelling and the people were so talented,” he said. “Here, I’ve found the same thing: The mission is incredibly compelling, and the people here are committed, passionate, talented and really want to devote themselves to glorifying God and doing so by helping people live consistent with the design God has for them.”

That’s the aspect that he’s found most appealing, he said. “We have been so excited — and not at all surprised, I have to say — but certainly excited to confirm that the people that God has placed here [at CSU] are experts in their jobs and are passionate about the gospel, passionate about helping students become who God has designed them to be,” he said.

Emphasizing Charleston Southern’s identity as “an unapologetically Christian university,” Costin added, “We often say, ‘We’re a Christian university, but we’re not a university just for Christians,’ which means that some number of the students who arrive are not Christians when they show up. Our clear hope, our clear prayer, our desire is that because of their exposure to the gospel and worship services that we have on campus, small groups, and every single class … that through the course of any student’s time with us, they’ll be developed into a follower of Jesus Christ.”

Developing a leader of character who will then go and change the world in his or her sphere of influence is “what makes this place exciting,” he said, “and our vision is to double down on those things.” 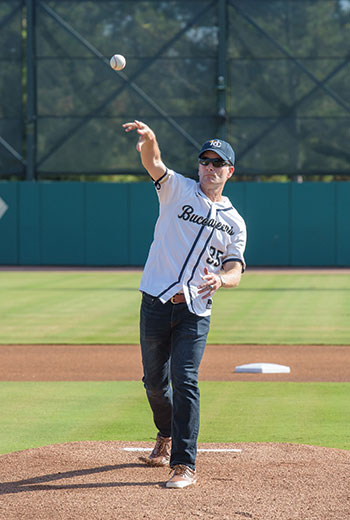 Costin throws out the first pitch at a Charleston RiverDogs baseball game. The game is an annual Move In Weekend tradition for CSU freshmen.

While he never pictured himself as a president of a university, Costin noted three things that have molded him into the person he is today: growing up in a Christian home, attending a strong church where the Word of God was preached unapologetically, and receiving a higher education in which he was kept close to the Lord through a Baptist campus ministry.

He also credits having a strong Christian spouse by his side, whom he met while stationed at Elgin Air Force Base near Fort Walton Beach, Fla. “When I got there, I was led to a local Southern Baptist church that turned out was Vickey’s home church,” he recalled.

She had recently returned from college and was teaching music at a public school. Her father was a deacon, and Costin and Vickey were part of the same college and career class, and she sang in the choir. So he soon found himself making sure he was attending the same service that she was attending.

“I found ‘Mrs. Right’ at Wright Baptist Church,” he is fond of saying, and they’ve been married now for 30 years. “The Lord just drew us together, based on common values and a common commitment to the gospel,” he said.

In sharing his calling to be a chaplain in the Air Force with her, Costin recalled that he wanted to be sure Vickey understood what it was going to mean. “Without hesitation, she said, ‘I’ll go where the Lord sends us.’ And she has done that every step of the way, including our coming here,” Costin said.

While having children “was not part of God’s plan for us, apparently,” they now have 3,500 kids of their own at Charleston Southern, he said.

In addition to enjoying reading biographies and books on leadership, Costin is an avid runner. “For me, the mind-body-soul-spirit connection has always been enhanced by my love of running,” he said. “It’s the way that I think God has wired me. I do a lot of my thinking, a lot of praying, a lot of meditating, while I’m running. It has become a part of who I am.” 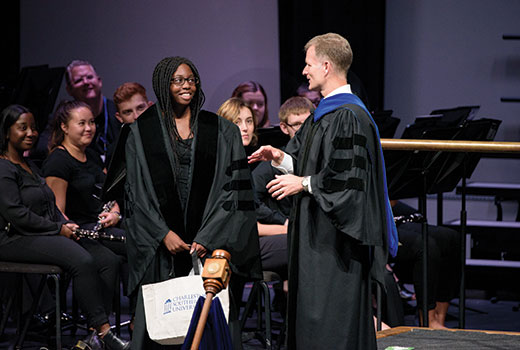 Costin gives a sermon illustration of the gospel by “earning a doctorate” on behalf of freshman Maysia Miles. “[A]ll you have to do is receive the work I’ve done on your behalf,” he said. “That’s the gospel. Jesus Christ doing for you what you could not do for yourself, if you trust in Him.”

But don’t let his nonchalance fool you into joining him on a quick jog. He has run marathons in New York, Boston, Chicago and Tokyo, leaving only two — London and Berlin — to complete all six “majors,” which is a goal of his.

The last marathon in which he participated was Boston in April 2018. It may have been a miserable day with temperatures hovering around 35 degrees, pouring rain, and wind gusts up to 50 mph, but still he crossed the finish line. “I doubled down on ‘Thank you, Jesus,’” he confided, but it certainly says something of his uncommon passion and commitment.

As for how he got his unusual name, as the story goes, his parents went to see a movie in which Patti Page starred back in the 1960s about a WWII orphan from Italy. “Somewhere during the movie, they decided that if they ever had a boy, they would name him Dondi,” he explained.

“The thing I really love about my parents is, they gave me a really good backup name. So, in case Dondi didn’t work out, I could fall back on it,” he added. “The perfect compliment to Dondi is ‘Enos.’ It’s good parenting advice: If you ever have an unusual name you want to stick a kid with, give him a worse middle name, so they’re forced to stick with the first one,” he laughed.

But while his unusual name may be a little hard for some to remember, one thing is for sure: His fervent passion for the mission and his commitment to those with whom he serves are sure to make Costin memorable in his students’ eyes.