Summer is just around the corner.

Do you know where your kids are going?

From three bustling college campuses and a wooded conference center to laurel-laden mountain peaks and sandy seashores, tens of thousands of teens and children soon will be having some amazing adventures at one of South Carolina Baptists’ camps this summer.

Here’s a quick overview of this coming camp season:

Evangelist Clayton King, whose Crossroads Worldwide ministry launched the camps in 1995, moved his operation from North Carolina to Anderson in 2014.

King said this year’s six summer sessions will host more than 5,000 middle and high school students and leaders representing 160-plus churches. As The Courier went to press, spaces were still available at two of the summer sessions. (Visit CrossroadsSummerCamp.com for more information, or call 864-437-8455.)

Crossroads Camps has seen in excess of 10,000 students make decisions for Christ and has raised more than $1.2 million for missions.

“Our mission is to reach students with the gospel, help them understand God’s Word, and give them the tools to live it out daily,” said King. “Our primary goal is to create an environment for each camper to be seen, known, and have a life-changing encounter with God.”

Crossroads Camps brings in “high-level speakers and worship leaders” each week, “but what truly sets our camp apart is our summer camp staff,” King said. “We hire and train the most passionate and energetic college students from across the U.S., and they are eager to pour into students and develop long-lasting relationships with them. They seek out students during the week and are available to them for spiritual conversations and guidance.”

Charleston Southern and North Greenville universities will host a series of MFuge and Centrifuge youth camps on their campuses this summer.

Centrifuge camps were started in 1979 by LifeWay Christian Resources of the Southern Baptist Convention. Since then, several versions of “FUGE” camps have evolved. The theme for 2019 is “Restored.”

At Centrifuge, students are divided into groups for recreation and Bible study based on age ranges. Recreation is facilitated within Bible study groups by a member of the FUGE camp staff, who also leads the Bible study. Each activity is designed so that students can make application in their lives.

At MFuge, campers jump into ministry and serve in local communities. FUGE staffers lead Bible study and facilitate the planning for each day. Students are divided into groups for Bible study and ministry based on the type of work they request.

MFuge is designed to give students a missions experience that opens their eyes to similar opportunities they may have to serve in their own communities, learning to live life each day on mission.

FUGE camps are for church groups whose students have completed 6th through 12th grades. For more information, or to register, visit FugeCamps.com. 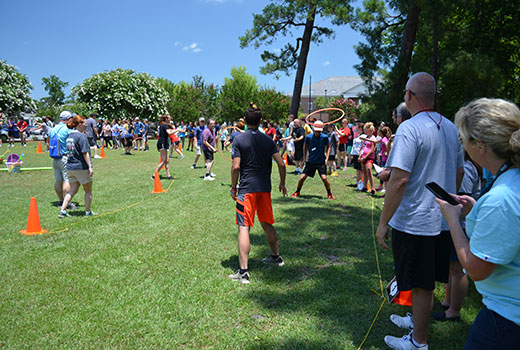 Seesalt’s theme for this summer will be “The BIG Picture: Heroes and Villains,” making it the third movie theme that Concoxions has done in 34 years of offering student conferences.

“Each one has coincided with the release of a ‘Toy Story’ sequel,” Bill Cox, executive director of Concoxions Ministries, said. “That gives us a good reason to reprise our very popular ‘Story Toys’ production.

“‘Story Toys’ will be one of many movie-themed drama productions we’ll do at Seesalt, each one presenting a powerful relevant message in an entertaining way,” added Cox, who served as associate director of the South Carolina Baptist Convention’s evangelism department and led SCBC youth events for 12 years.

Seesalt offers two locations, providing a choice of a beach or mountain setting. The schedule includes extended free time on Wednesdays so groups can take advantage of area attractions.

SummerSalt, a high-energy summer youth camp run by the Generations Group of the South Carolina Baptist Convention, will once again offer five camp sessions in 2019, beginning June 10.  As The Courier went to press, all weeks except one — the July 1-5 session — were full. (For specific information, visit SummerSalt.org.)

SummerSalt, designed to “grasp and captivate the next generation with the gospel,” was established in 1987 and is held each year at White Oak Conference Center in Winnsboro. The staff is made up of 25-30 college students from around South Carolina and beyond.

SummerSalt Global will be partnering with Mission Serve (Mission-Serve.com) and Waccamaw Baptist Association to help rebuild homes and lives affected by hurricanes Florence and Michael. The dates will be July 14-19 at North Myrtle Beach Christian School (for lodging) and Wampee Baptist Church (for worship).

SummerSalt Global is open to students who have completed grades six-12. Work will include drywall, flooring, crawl space insulation, and painting. To register, contact Mellette Teague at 803-227-6056 or melletteteague@scbaptist.org.

The state convention also offers an overnight summer camp experience for third-, fourth- and fifth-graders through KidSalt. The four-day camp, also held at White Oak, gives children the chance to experience the message of Jesus during worship, Bible study, track times, and recreation.

KidSalt sessions will be held July 15-18 and July 22-25. Churches may register at SummerSalt.org.

As of press time, Camp La Vida had about 400 registered and was anticipating more than 1,500 campers this summer, according to Cindy Skelton, Woman’s Missionary Union children’s consultant, who also serves as camp director.

Nine camp staffers are returning this year to lead the programming for the Girls in Action and Actions camp in Winnsboro. “More than 80 percent of the staff have been campers before and fondly remember their experiences at La Vida,” said Skelton.

“Part of the reason that a lot of staff want to work here is to be that same kind of influence in campers’ lives as [former] staff had on their lives as campers,” she added.

“Set Free” will be the theme for this summer, she said, and 28 program guests have been enlisted from Spartanburg, Pickens and Columbia, as well as from North Carolina, Georgia, Maryland, North Africa, the Middle East, South Asia and Asia.

“Camp is a great way for children to unplug [from cell phones, computers and video games] and to connect with God, friends and natural surroundings,” Skelton said, noting that space is still available for every session. For details, see camplavida.org.

This summer marks Camp McCall’s 60th year of ministry, so lots of events are in the works to help celebrate the occasion, said camp director Matt “Spinner” Allen.

The Royal Ambassador camp will host a 60th Anniversary Celebration on Saturday, July 27. “It’s a camp-wide reunion, not just for former staff, and we are anticipating maybe as many as 750 people,” Allen added.

This summer’s theme will be “Legacy,” tying in with the anniversary observance. Campers will look at what it means to leave, and live, a legacy, highlighting Ephesians 3:17 — “being rooted and grounded in love,” Allen said.

Slightly more than 500 campers had registered as of mid-April. Early numbers are keeping pace with last year, when 2,205 campers attended.  All camps are still accepting registrations, Allen reported. (For dates, see campmccall.org.)

Twenty-six staff members will be returning, along with 13 new guys, and a lot of cosmetic updates to the camp’s facilities have been made, Allen reported. “The camp was really showing its 59 years, and we’ve spent a lot of time and money updating and bringing camp into the 21st century,” he noted.

“We continue to transition from ‘just a summer camp’ to a place where ministry happens year-round,” Allen added. Program leaders are developing some long-range capital improvements that will allow winterized use of the facility.

— By Todd Deaton and Butch Blume.