The Great Commission, the Cooperative Program, supporting pastors and listening to Southern Baptists will be among the early emphases of Ronnie Floyd’s presidency at the Southern Baptist Convention Executive Committee.

“Our missional vision as Southern Baptists is to present the gospel of Jesus Christ to every person in the world and to make disciples of all the nations,” Floyd told the press following his election by the EC in Dallas on April 2. “It will be to that end, that end of reaching the world that I will give my life … in this next season — 100 percent, from before daylight until exhaustion, until Jesus comes or until He calls me home.”

In a Facebook Live session, Floyd also emphasized his support for SBC President J.D. Greear’s efforts to combat sexual abuse in churches. Southern Baptists must “do everything we can” to help victims and resource churches to prevent abuse, he said.

Southern Baptists seem poised to unite at the 2019 SBC annual meeting in Birmingham, Ala., and make “as declarative a statement as we can make to our culture about what we believe about this issue” of sexual abuse, Floyd said. 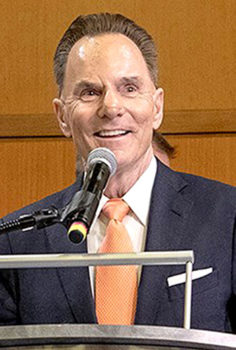 Ronnie Floyd is the newly elected president of the SBC Executive Committee. (Photo by Adam Covington)

During his press conference, Floyd underscored repeatedly, in response to questions on a range of topics, his focus on the Great Commission — Jesus’ call in Matthew 28:19-20 and other Scriptures to make disciples of all nations. For the SBC, he said, the Great Commission is linked with the Cooperative Program, Southern Baptists’ unified channel of funding missions and ministries in North America and across the globe.

“I will say again and again that our work together as Baptists to take the gospel to the ends of the earth is dependent ultimately on our ability to prioritize and accelerate our giving through the Cooperative Program,” Floyd said, as well as the Lottie Moon Christmas Offering for International Missions and the Annie Armstrong Easter Offering for North American Missions.

Local churches, Baptist associations, state conventions and the SBC all have sought to implement the GCTF’s recommendations, Floyd said. He commended state conventions for increasing their CP giving to SBC causes by more than 4 percentage points collectively since 2009-2010.

As Southern Baptists advance the Great Commission among people of all ethnicities, Floyd said, the SBC should seek to be known as “the greatest multigenerational, multiethnic and multilingual denomination in the United States of America.”

Floyd will carry out his work at the EC with a pastor’s mindset and a love for local churches, he said, drawing from his 42 years of pastoral experience.