When most people think of coins, they think of leftover change pocketed after making a purchase. Not Wayne Damron. For him, old coins have a story to tell.

The member of Riverland Hills Baptist Church in Irmo has amassed a fascinating collection of rare coins — some of which were in use in Jesus’ lifetime — and he’s discovered they are a great way to share Bible stories.

About 25 years ago or more, when Damron was team-teaching Sunday school at a Presbyterian church where he attended at the time, it seemed like whenever coins were mentioned in a Scripture passage, it was his turn.

“I would get so excited about it because I was a coin collector,” he recalled. “One of the other teachers suggested that I put together a whole class on coins of the Bible.”

And that’s how it all got started. 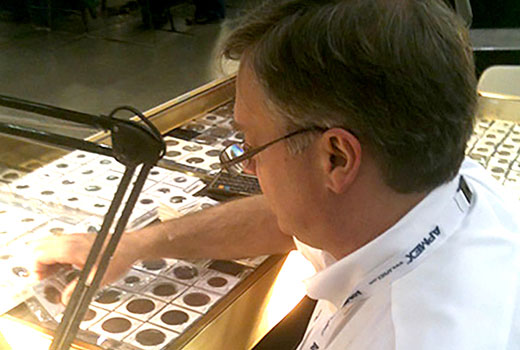 Damron was the owner of Clein’s Rare Coins shop in Augusta Ga.,until his son took over for him several years ago. He’s been involved in the coin business in some form or fashion for more than 60 years. So he knows where to find ancient coins.

His treasury dates back to biblical times, making his presentation ideal for Sunday school classes, senior adults, youth and other church groups. His fee: one cup of coffee, or two glasses of sweetened iced tea.

After a 20-to-25-minute presentation explaining their history and biblical significance, Damron passes around the coins for people to hold. “They’re often in awe, realizing they’re holding coins that are 2,500 years old,” he said.

Among his oldest coins are gold darics from the time of Darius the Great, mentioned in 1 Chronicles 29. The Israelites generously gave 10,000 gold darics, among other coinage, for constructing Solomon’s Temple. The account is the first time in the Bible that a large sum of money is mentioned, according to Damron. About the size of a dime, the daric has an image of the Persian ruler kneeling and holding a bow and arrow.

“Darius the Great also has another meaning for those of us who are runners,” Damron noted. “He was the ruler who was defeated at Marathon, when Pheidippides ran from Marathon to Athens [to announce the Greek victory], and then died.”

His collection also includes a half shekel, mentioned in Exodus 30:11-16, where Israelite males, 20 years or older, paid an annual tax of a half shekel to the temple treasury. A half shekel looks like the shekel, with a bust of Melqart, the tutelary god of the Phoenician city of Tyre, on the front and an eagle on the back, but it is about the size of a nickel.

The half shekel plays a very important role in Matthew 17, Damron noted. “There, Jesus tells Peter to go to the lake, and cast his hook into the water, and in the first fish he catches, take the shekel out of its mouth. Then, go to the temple and pay the tax,” Damron explained.

Sunday school goers also will remember that 30 shekels was the sum offered to betray Jesus in Matthew 26. “If you had 30 [shekels], you could hold them in the palms of your hands,” Damron observed. “That’s all it took to betray the Lord.”

People also can hold a denarius, a coin which appears in Matthew 22, where Pharisees and Herodians tried to entrap Jesus into saying or doing something He shouldn’t. Jesus knew their evil intent, and asked them: Whose portrait is this, and whose inscription is this? “Of course, the portrait was of Tiberius, and the inscription could have been something like C-A-S for Caesar or E-M-P for emperor,” Damron said.

But there’s one particular coin that, even though it’s from the Byzantine era, not Bible times, is still special to Damron. In fact, he looked for one for about 16 years, until his son, who now runs the coin shop, finally found one at an auction in London.

“It’s a copper coin called a follis,” he said. About the size of a quarter, the follis that he possesses is from around 969 A.D. To him, it attests to just how prominent Christianity had become in that region during that time period.

But it’s what is inscribed on the front that Damron finds very exciting. “It has the icon of Jesus with the inscription ‘Emmanuel,’” he said. “The reason why I was trying to find this coin, though, is on the back, in Greek, are these letters: IS-XS bAS-ILE / bAS-ILE.” When translated to English, the phrase reads, “Jesus Christ, King of Kings.”

“Today, [some people] complain about the fact that it says ‘In God We Trust’ on our currency,” he added. “Can you imagine how they’d react if it said ‘Jesus Christ, King of Kings’?”

But Damron has another outreach that he is also known for locally. Growing weary of Christmas seemingly becoming more commercial each year and wanting to “keep Christ in Christmas,” he began giving away magnets about 12 years ago that read, “We Say Merry Christmas.”

The first year, he gave away about 100, mainly to family, friends, and his Bible study class. But word since has gotten out, and the effort keeps growing. “We’ve now handed out — through the Lord’s blessing — more than 16,000 magnets,” he said. “We’ve never sold the first one.”

While the number of coin presentations he does has slowed down some since he retired, Damron still enjoys having an opportunity to share his knowledge and love of coins with others. It’s his way of giving back, he said.

“I think the main thing my presentation does is that it gives people a chance to relate a passage in the Bible to a coin,” Damron said. “I found over the years that people would shake their heads and say, ‘I never realized what that particular coin really looked like,’” he said.