“Besides Jesus Christ, my wife, Billie, is the star of my story,” said Mike Moody, pastor of First Baptist Church, Honea Path, and a past president of the South Carolina Baptist Convention.

On May 5 the church celebrated its 150th anniversary and his 20th anniversary as the longest serving pastor in the history of the church. The church was packed as praise was offered for the past, and plans were emphasized for the future. Moody, who loves to cut grass, was given a new John Deere zero-turn lawn mower. It was a celebration filled with thankfulness and gratitude. 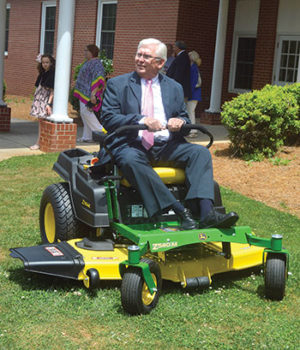 Moody’s personal life story, however, changed dramatically on Jan. 14, 2015, when he was returning from the cemetery following a funeral. A truck swerved to avoid stopped cars and ran head-on into his Jeep. “I had never had a broken bone before then, and at that moment I felt like everything was crushed. I thought I was going to die,” he said.

As he slipped in and out of consciousness, he prayed, and God “gave me a peace that passes understanding. Psalm 23:4 — ‘Even though I walk through the valley of the shadow of death, I will fear no evil; for Thou art with me’ — really took on a different focus in my heart that day.”

His oldest son, Josh, was following a few cars behind his dad. When he got to the scene, his dad asked him to call his mom. “I couldn’t breathe, and I could not get the door open. I thought I might burn up in the Jeep, and I did not want my son to see me die in that Jeep,” he said.

“God spoke to me in an inaudible way and let me know everything would be all right. I knew if I died, I would be in the presence of God. I relaxed,” he said. “A big guy appeared and jerked open the door and I got a fresh breath of air.” 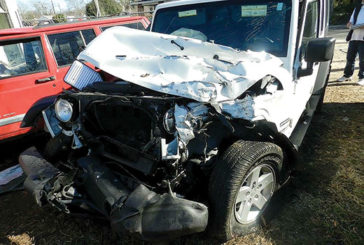 Moody’s Jeep was a total loss after a 2015 accident.

Soon, he was on an ambulance en route to the hospital. He had a concussion, three broken ribs, a lacerated knee, two torn rotator cuffs and two detached biceps. Following treatment in the days ahead, he had meniscus surgery in July. Eleven months later, he had knee replacement surgery, followed by the surgical repair of one rotator cuff and one bicep.

Then a serious infection was discovered in his knee in August 2017. He had surgery again on the knee to clean out the site and was placed on a regimen of intravenous antibiotics six hours a day for seven weeks.

By October the infection was still present, and the replacement knee was removed without immediately doing a second surgery. He underwent six more weeks of intravenous antibiotics. In January 2018, a second knee replacement surgery was performed — this time with eight “pieces of metal” added around the joint. He stayed on oral antibiotics until February 2019.

He still has a torn rotator cuff, a detached bicep, walks with a slight limp, and says he will be under the care of an orthopedic doctor for the rest of his life. “I know guys who have been through much worse than me. My youngest son, Adam, saw some terrible stuff on the battlefield when he served in the Marine Corps. My dad was wounded in World War II,” he said. 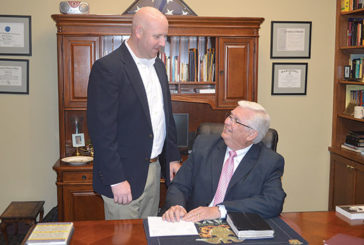 Moody with his youngest son, Adam.

“Sometimes, humanly speaking, you find it hard to go on, but God gives us grace in the time of need. He said He would never leave us and that was made clear to me when I needed it the most,” he said. “God gave me a new understanding of the deep valleys of life, and I want to help those going through valleys like that in the future. I understand things better now. I do have some limitations, and by late afternoon I am looking for the recliner.”

He was out of church for 52 weeks over a four-year period, undergoing six surgeries. The church rallied around its pastor with their presence, help, meals, prayer, and finances. He stated, “No church on earth could have been better to me. I am blessed by an unbelievably loving family — my wife, sons, daughters-in-law, and grandchildren. They have all been so helpful to us. My sons cut the grass for me, and Billie was by my side the whole time. She had been a school teacher for 33 years and had no medical training, but she learned how to administer my IV at home every day for 13 weeks. She is the best person I know, a real prayer warrior.”

Moody, who is 66, is thankful to be alive and looking forward to cutting grass on his new lawn mower. His story took an unexpected turn, but He is quick to point out that God was with him — blessing him and preparing him to serve with deeper empathy and understanding in the years ahead.