The summer of 1869 seemed anything but fair for South Carolina. The Southland was in the depths of poverty and discouragement following the Civil War. The land was laid waste, the economy destroyed, and many young men had been killed in battle or were crippled by their wounds.

In that year, a young man was at work on a noble idea. Tilman R. Gaines saw the need for a Baptist news publication. It would help to unite the Baptist people of the state — 43,000 of them widely scattered in a day of difficult transportation and poor communication.

Gaines firmly believed that a great future of service lay ahead for Baptists. Then, as now, they constituted a sizable portion of the state’s population. They were strong, reliable people who felt that their religion should be lived and shared. Baptists could support a great educational ministry, missionary program and benevolent endeavors. But in order to do so, they must have a cohesive force of information and education. Gaines believed that a denominational publication could serve this purpose. 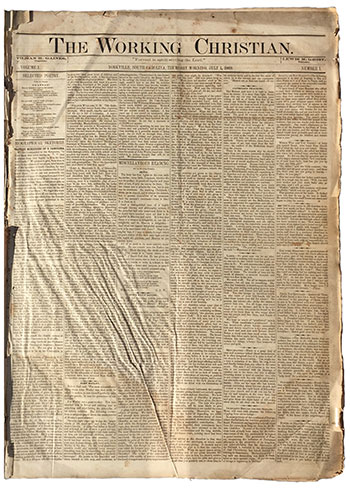 Around 1877, The Working Christian was renamed The Baptist Courier, and the newspaper relocated to Greenville two years later.

On July 1, 1869, Gaines printed the first issue of The Working Christian. Previous struggles had not discouraged the 35-year-old minister, who earlier had failed with a monthly paper called The Baptist Church and Sunday School Builder.

This time the paper would be published each week, he boldly announced.

Gaines had energy to match his courage. He enlisted the denomination’s most able scholars and preachers to assist with the writing. He encouraged lively debate, using the columns to air points of view on controversial topics of the day. He worked tirelessly to sell subscriptions.

The paper grew from the start, with 2,500 subscribers during the first summer. Gaines moved the offices to Charleston in 1870 and to Columbia in 1871. In 1877 the name was changed to The Baptist Courier, and in 1879 the publication was moved to Greenville.

Gaines later sold his interest to partners and other printers. In 10 years, he had seen the paper move firmly into a position of influence among South Carolina Baptists — a position that would only grow stronger during the next decades.

In its beginning, The Baptist Courier was privately owned. It was endorsed by the denominational leadership as “a fine and noble publication, worthy of our reading and our support.” The convention had no control over its operation and management, however.

The pattern followed by South Carolina Baptists of giving endorsement to a privately owned Christian publication, which the convention would eventually own and control, was remarkably similar to that followed by Baptists in neighboring states at the same period.

James Alfred Hoyt was principal owner following Gaines, with Abner Whateley Lamar listed as editor. For the next 11 years, Lamar, Hoyt and J.A. Chambliss served as editor or co-editor. Andrew Jackson Spears Thomas became one of the editors and partners in 1891, serving until his death 20 years later.

In 1911, The Courier acquired perhaps its most colorful editor, Z.T. Cody. He and J.C. Keys assumed joint ownership with Cody as editor and Keys as general manager in charge of business and printing operations. Keys’ father, W.W. Keys, had been a partner in ownership and printing of the publication since 1883.

Zechariah Thornton Cody was a native of Henry County, Ala., a Baptist minister who moved to Greenville in 1901 as pastor of First Baptist Church. He resigned to become editor of The Courier in 1911 and continued until his death in 1935.

By the mid-1880s, The Courier was “must” reading for pastors and active church families in all parts of South Carolina. Its subscribers included not only Baptists but hundreds from other denominations. Interestingly, the news columns accommodated them with frequent mention of events among these denominations.

The main thrust always was among Baptists, however. The Courier had become a dominant influence in Baptist thought and action. An example is the issue of Nov. 15, 1888, in which W.W. Keys had an editorial calling on South Carolina Baptists to establish a “home for orphan children.” Keys followed his words with action, presenting a resolution to the convention on Nov. 29 of that year, out of which came the Connie Maxwell Children’s Home in Greenwood.

In 1920, the South Carolina Baptist Convention purchased The Baptist Courier from its owners, Z.T. Cody and J.C. Keys, for $24,000. Cody was retained as editor until his death 15 years later. Keys bid successfully for several years to continue as printer. In 1935, the printing contract was awarded to Hiott Press of Greenville.

The convention elected a board of 15 trustees who secured a charter from the State of South Carolina and approves them at its annual meeting. They are on a rotating system, three elected each year for a term of five years.

At that time, the convention instituted major financial and promotional help, and circulation began a dizzying climb that by 1947 had reached 61,740. Ten years later, it had zoomed to 92,800, then went into a slow decline. Today, it hovers around 28,000.

With the invention and proliferation of the smartphone, our society has become the most informed and digitally entertained culture in human history. Most people now access the internet and communicate using smartphones and tablets, increasingly consuming their news through social media outlets rather than traditional media of television, radio and newspapers.

Today, The Courier, in addition to a print magazine, publishes Baptist news on four online platforms: e-editions, Facebook, Twitter and an extensive website. The Courier averages more than 46,000 digital impressions per month. Print circulation (times an average of 2.5 readers per household) yields an estimated readership of 77,500, which when combined with digital impressions lends a total monthly audience surpassing 122,500.

In addition, The Courier launched a book publishing division in 2013, which this year is expected to exceed 60 book releases, that are marketed on Amazon and other outlets.

Tilman R. Gaines would hardly recognize The Courier of today as the heir of his little Working Christian established 150 years ago. From an “editor’s desk” in the corner of a print shop, its accommodations have grown to a modern office building in a historic district of downtown Greenville.

From half a dozen pages of hand-set type with no pictures, the publication has grown to 24 pages of computer-generated layouts with large four-color photography that are uploaded digitally to a printing press. The magazine now is printed on a high-speed, sheet-fed press that can deliver 10,000 or more finished, glossy magazines per hour.

Its changes have been only mechanical and functional, however. As in the beginning, The Courier today is intended to be for and about South Carolina Baptists.