In a worship service held July 27 in its mountaintop chapel, more than 525 staffers, former staffers, friends of Camp McCall and their families celebrated 60 years of God’s blessings upon the South Carolina Baptist camp.

Keynote speakers shared how attending the camp near Sunset as a boy or having served as a camp counselor had impacted their own lives, leading many of them to answer a call into the ministry or missions.

Camp Director Matt “Spinner” Allen, who himself is a product of Camp McCall, having been both a camper and serving on its staff, shared about the spiritual legacy of Roy and Belle McCall, an Easley couple who donated the 120 acres of land to the South Carolina Baptist Convention in 1958. 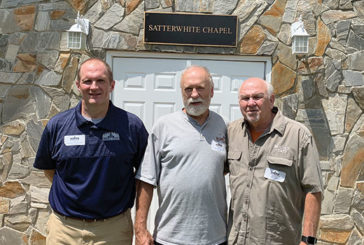 “God uses our tools, our talents and our acts of obedience as an avenue, as a resource, for doing life-changing work in the lives of other peoples,” Spinner said. From the McCalls’ obedience, “60 years later, we see some of the results,” he added.

“We see 134,000 campers who have walked through these gates. We see 26,000 who have made some kind of decision (for Christ) here,” he continued. “We see generations of pastors and ministers and missionaries who were called and sent forth from here around the globe, working to spread the gospel of Jesus. We see a legacy of campers who have gone out in every level of society from school teachers, to exterminators, to businessmen, to chicken farmers and everything in between” to influence their workplaces and homes as Christian leaders.

“We believe that out of the obedience of the McCall family, God has changed and is changing the world,” Allen said.

Hal “Bunker” Hill, who now directs a Christian camp in California, told how his career had been “heavily affected” by his time serving on McCall’s staff.

Hill also told how when he was a 10-year-old camper, a McCall staffer had said something that “helped me realize that being a Christian mattered … that it was having Christ in my heart that would make an eternal significance.” 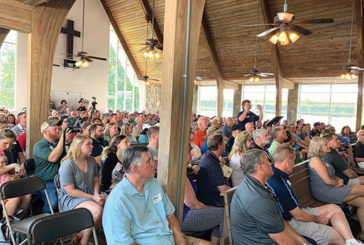 More than 525 former staffers, spouses and friends of McCall packed the chapel and overflow tents on both sides for the event.

As a camp director, Hill said he continues to teach his staffers that “it might be through a conversation that you don’t even remember, [but] it is how God can use us to impact the world.”

Brian “Biskit” Spearman, a former staff member who now is pastor of First Baptist Church of Marietta, urged fellow pastors to take their kids to camp. “You will never regret loading up as many kids as you can possibly get to come … because you never know what it’s going to mean in the future,” Spearman said.

One of those is Ken West, who, after having heard a missionary speak for the first time at Camp McCall as a camper, later became a missionary to the equatorial jungles. “God put me on a course of going to an unreached people group with the gospel,” he recalled.

“Camp McCall is leaving a global footprint,” he said. “I pray every week, when a new group of campers comes in, that God will send out some of those (boys) to the ends of the earth.” 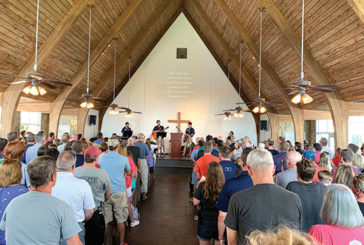 McCall staffers lead the congregation in praising God for the many decisions of faith and missions and ministry callings made at the camp.

Jay Floyd, a member of Beulah Baptist Church in Eastover, has been bringing boys to camp for more than 20 years. “It’s absolutely fantastic … . Coming to camp is the best thing any parent can ask for,” he said.

Floyd’s oldest son, Grant “Yankovich,” served on the staff from 2013 to 2016, and his middle son, Carson “Mahnkark,” is now on the staff. His youngest son, Lucas, attends camp several times each summer, and his daughter, FaithAnne, works in the kitchen.

“For us as parents, it’s just such a blessing” for our children to be here, Floyd said.

Lee Clamp shared how, when he was a young boy in elementary school, the McCall staff had seemed liked “heroes of the faith” to him. He recalled how he and other campers had been challenged to “not only follow Jesus, but also to be bold enough to tell other people about Jesus, regardless of where that might send you.”

As the team leader of evangelism for the South Carolina Baptist Convention, Clamp said, “I would venture to say that the investment in Camp McCall could potentially be one of the greatest things South Carolina Baptists have ever done — in not only devising a place that we could convene with God, but also a place where Christian leaders are developed and launched all over the world.”