The congregation of Washington Baptist Church in Greer will celebrate its 200th anniversary Oct. 27.

Washington Baptist was constituted in October 1819 and joined Broad River Baptist Association. Isaac Lamance served as its first pastor for 19 years. During his tenure, the congregation grew to about 150 members and a log building was constructed in which to worship. The church’s current sanctuary was built in 1964.

Through the years, Washington has been a member of several Baptist associations before becoming a charter member of Greer Baptist Association in 1959. 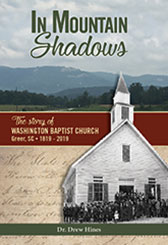 Drew Hines has served as pastor of Washington Baptist for 18 years. During his tenure, the church has undertaken two major building programs to accommodate its growth. A graduate of the University of South Carolina and Southern Baptist Theological Seminary, Hines and his wife, Suzanne, have two children, Miranda and Andrew.

“In Mountain Shadows,” a history of Washington Baptist Church written by Hines, is being published by The Baptist Courier and will be available at the anniversary celebration service, which begins at 10:45 a.m. A 200th anniversary cookbook and church directory are also being produced.

“Washington has a long, rich history and a great heritage of service to the Lord and our community,” Hines said. “I pray that we will faithfully continue to fulfill Christ’s Great Commission until He comes.

“As much as we celebrate our rich heritage, we also look forward with joyful anticipation to what the Lord is going to do in the days, years and decades ahead,” Hines said. “We are a church that is excited about all the open doors the Lord continues to lead us through.”