Robbie Baxley served as a deacon, Sunday school teacher and “on about every committee you can serve on” at First Baptist Church, Mullins, for more than 17 years. In March of this year, the church called him as senior pastor.

When the church was without a pastor, he said, “They asked me if I would take every other Sunday. I did that for about six months.” Then, as the church was soliciting résumés from potential pastors, church members asked him if he was going to submit a résumé.

He said, “The Lord convicted me, so I submitted my résumé. In January, the search committee called me and said they felt God was calling me to be the next pastor. We started to pray even more earnestly. I accepted the position, resigned my job, and started here in March.”

Baxley had spent approximately 23 years working in the medical field as “director of radiology, doing nuclear cardiology, MRI, CAT scan, and special procedures.” He said, “My office (the pastor’s study) looks kind of wild. I have my diplomas, etc., from my previous career hanging on the wall along with my lab coat.” 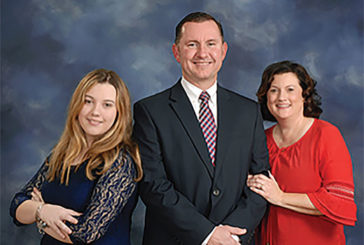 Robbie Baxley and his wife, Caroline, with their daughter, Katelyn.

Since he became pastor, the church has experienced a spirit of revitalization. He has led them in an emphasis called “A New Journey,” based on Jeremiah 29:11. “Attendance has picked up about 70 on Sunday mornings, and we have had 25 people to join the church, 13 coming for baptism,” he said. “We were about $45,000 in the red this time last year, and now we are almost $51,000 in the black. I see God moving, doing incredible stuff here.”

The church just completed a study of Thom Rainer’s book, “Scrappy Church,” and is bringing back something they used to do called Fall Harvest Crusade. This Oct. 7-9, Stephen Rummage from Oklahoma will preach, and Ivan Parker will lead the music. Baxley has scheduled Herb Reavis to preach in 2020 and Mike Stone for 2021.

“I am not coming straight out of college. I am a little more seasoned, and I had a great career. In fact, I plan to keep my license up,” he stated.

He calls himself a disciple man, and while he has had no seminary training, he plans to continue his ministerial education and preparation soon, possibly at Charleston Southern University. His grandfather was a pastor, and his father was an associate pastor.

The church had a weekly cable television program, but added Facebook Live in May, where the Sunday morning services can be viewed live. They now have about 1,000 followers through that medium. “It has done major good stuff for us,” he said.

He said God began to “work in my life in 2017,” and the church licensed him to preach. “I did interim work for some of the churches in the community and even here before I was licensed.”

Church members asked him then if he was going to quit his job and “go straight into the ministry.” He said, “At that time, God had just not affirmed that to me.” Since then, the call was affirmed to him and to the church, and they ordained him to the gospel ministry.

Baxley, along with his wife, Caroline, and daughter, Katelyn, survived two floods. “We lost our house and everything we had in it. We rebuilt and moved in just before Christmas last year,” he said. “God let us know that stuff means very little. When you watch the garbageman pick it up and carry it to the landfill, it does something to a man. You see how quickly it can leave. The Lord spoke to my heart real hard at that time and used that event in my life,” he said. “It was like God was saying, ‘Now go and work for the kingdom because moth and rust won’t take that away.’”

Baxley said he plans to stay at First Baptist, Mullins, for “a long time.” He said, “I tell our folks that very few times in a person’s life do you get to be a part and an eyewitness of God doing something amazing — something so special that you just turn to your neighbor and say, ‘This just had to be God.’”