The 759 registered messengers to the 199th annual meeting made history Nov. 12 by electing a Simpsonville pastor as the first African-American to serve as president of the South Carolina Baptist Convention.

Meeting at the Church at The Mill in Moore, under the theme “Engage,” South Carolina Baptists were challenged by speakers — Brentwood, Tenn. pastor Mike Glenn; Chattanooga, Tenn. pastor Micah Fries; Jacksonville, Fla. pastor H.B. Charles Jr.; and Edgar Aponte of Lutz, Fla. — to actively engage the culture, the lost, the nations and the future.

Josh Powell, pastor of Lake Murray Baptist Church in Lexington, will lead the South Carolina Baptist Convention in 2020. Powell has served the past 12 months as president-elect. He officially assumed the office of president at the conclusion of this year’s meeting.

In this year’s balloting, Alex Sands, pastor of Kingdom Life Church in Simpsonville, was elected by acclamation as president-elect. The president-elect automatically becomes president following a year of service.

Following Sands’ election, current SCBC President Bryant Sims said, “After slavery ended, virtually every African-American left the balconies of our churches to form their own churches and conventions. Our track record on the race issue over the next 100 or so years was not great, to say the least, but today … today, we’ve elected my brother, Alex Sands, and I could not be more thrilled.

“Folks, I don’t want it to be lost on us today, that on our 200th anniversary — the oldest state convention in the Southern Baptist Convention — our first African-American will preside as president of the South Carolina Baptist Convention,” Sims said.

Sands was nominated by Charleston First Baptist pastor Marshall Blalock, a past president of the state convention. Sands has been serving as first vice president, and his church, which was planted in 2003, joined the SCBC in 2005. He has served on the SCBC Executive Board and was vice chairman of the executive director-treasurer search committee.

“Everyone who knows him, knows him to be a man who’s faithful to his Savior and lives that faith everyday,” Blalock said of Sands. “He’s also the kind of leader I know who will serve well in this office because he’ll represent us with distinction and wisdom,” Blalock added. “He shares the passion of our state convention to see every life saturated and transformed by the hope of the gospel.”

Other officers, all elected without opposition, include:

Messengers approved a Cooperative Program operating budget of $28 million, unchanged from last year. The budget commits 41 percent of receipts, or $11,480,000, to the Southern Baptist Convention and an additional 4.5 percent, or $1,260,000, to the International Mission Board. When combined with the IMB’s allocation from the SBC Cooperative Program portion, South Carolina Baptists are sending $7 million for international missions efforts. 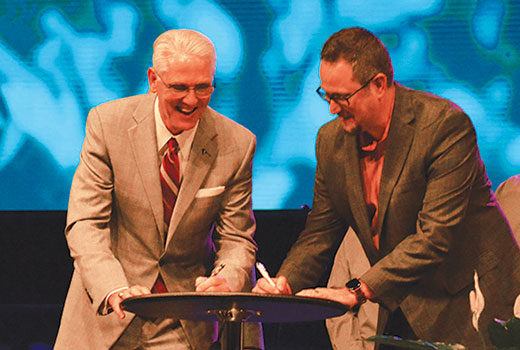 In seeking to eradicate barriers to reaching the state’s growing minority populations, the committee offered three opportunities aimed at making the state convention more welcoming to all races and ethnicities. They recommended strengthening and investing in Baptist Campus Ministries on university campuses; developing tactical approaches in church planting to strategically reach into areas with growing minority populations; and creating a pastoral care network to provide training, support and fellowship for minority church leaders.

Messengers approved resolutions addressing such social issues as the state’s fetal heartbeat bill, human trafficking, and the Equality Act before Congress. Among the adopted resolutions:

Noting that about 225 churches of the state convention’s 2,125 churches have adopted schools, messengers encouraged more congregations to intentionally engage students through faith-based ministries such as Heart 4 Schools.

South Carolina Baptists called upon members of the state General Assembly to pass the Fetal Heartbeat Protection from Abortion Act. The bill protects “the most innocent of us all” by protecting the unique beating heart of an infant in its mother’s womb, the resolution stated.

All South Carolina Baptists were encouraged to seek to eradicate human trafficking through education and awareness. Noting that South Carolina ranked 12th in the nation in 2018 in trafficking cases per capita, the resolution urged Christians to open their homes and hearts to provide sanctuary for at-risk people to protect them from predators. It also encouraged supporting agencies and ministries that help rescue and rehabilitate victims.

Stating that the Equality Act “falsely equates sexual conduct with immutable and unchanging attributes like skin color, race, and national origin and openly contradicts biblical mandates,” messengers expressed opposition to the legislation before the U.S. Senate. The Equality Act would effectively destroy religious freedom protections currently enjoyed by houses of worship and force faith-based adoption providers to choose between continuing their life-affirming work or violating tenets of their faith, the resolution stated.

First reading of motions for adoption at the 2020 annual meeting included an increase in percentage of ordained ministers to laypersons from 60 to no more than 80 percent of either group serving on the Executive Board, and clarification of language related to various staff positions.

Scott Lee, SCBC chief administrative officer, updated messengers on the potential sale of the White Oak Conference Center. Lee reported that the Executive Board has accepted an offer on the 640-plus acres of undeveloped land for approximately $1.22 million. The conference center’s buildings, however, are not part of the deal, and the facility remains open for business.