The few remaining members of Sylvia Circle Baptist Church observed an ending and marked a new beginning Nov. 17 during a 4 p.m. service of remembrance and giving thanks.

The Rock Hill congregation and its bivocational pastor, Duane Ivey, officially turned over their property and assets to Park Baptist Church, also in Rock Hill, which will be sponsoring a relaunch with a full-time, African-American pastor.

Sylvia Circle began as a mission of First Baptist Church of Rock Hill in 1955 and was a thriving congregation for some time. In more recent years, however, the congregation has been declining numerically.

“Over the years, there have been chapters of its story that included numerical growth and God’s calling of several young men into God’s ministry,” wrote church clerk Blanche Stroud, who at 97 is the congregation’s only living charter member. “But there have been chapters in the story of Sylvia Circle Baptist Church that the church would have preferred have never been written.” 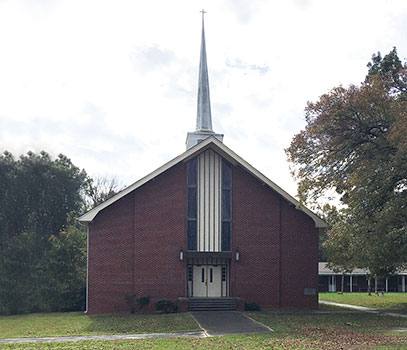 Sylvia Circle’s facility will be passed to Park Baptist Church.

As the community around the church changed demographically, members began moving to the suburbs and Sylvia Circle’s membership dwindled. “The church has operated [for] a number of years with the help of several churches renting needed space to carry on their work for the Lord, but the time came when the few remaining members of Sylvia Circle had to make a decision,” Stroud added.

They contacted James Nugent, a church-planting strategist at the South Carolina Baptist Convention, who also works with struggling churches. After researching the surrounding area, Nugent and Park’s pastor, Dave Kiehn, suggested that the congregation should be replanted with an African-American pastor to better reach its community.

“Like so many communities, the church was predominantly white when it began, and the community had changed over the years, but the demographics of the church had not,” Kiehn said.

The few remaining members wanted the church to remain a gospel witness for the community, Kiehn said. They wanted help identifying an African-American pastor to lead the replanted congregation, he added.

“It is a wonderful thing when you have godly senior saints realize — and they’re humble enough — that it’s time for the church to move in a new direction under new leadership to be able to reach people with the gospel,” he noted.

“When I asked them, ‘Why would you do this? Why would you want to give your property to our church that we would help relaunch it?’” he continued, “they would just say things like, ‘We want this building to be a lighthouse to our community.’”

Meanwhile, Park’s members have agreed to take the lead in replanting Sylvia Circle Church under its new leadership.

“We’re going to get the church building ready for a new pastor,” Kiehn said. Park members will be maintaining the facility, sprucing up the grounds, fixing its roof, painting rooms, and otherwise making sure that everything is ready for his arrival.

“We’re also identifying a core team of 15 to 25 people who would want to be part of the new plant,” he said.

Kiehn personally has been discipling the new pastor, Nytrellis Ross. After walking with Ross around the facility and sharing their vision and hope for seeing a church that preaches the gospel reaching that community, “God just called his heart there,” Kiehn said.

Ross, a native of Georgia, currently is serving as a church-planting resident at Faith Baptist Church in Youngsville, N.C., while finishing his seminary degree at Southeastern Baptist Theological Seminary. He plans to start at Sylvia Circle in June.

“It’s just really beautiful when you have Southern Baptist churches cooperating together for the kingdom,” Kiehn concluded.