“Oh, good grief!” Sunny Starfish exclaimed after Crusty Crab knocked the bag of flour onto the floor and all over her.

The Cove Kids had decided to treat their parents to a Thanksgiving dinner. They had only been in the kitchen for 15 minutes when Crusty’s mishap — the first of many problems — happened.

“It’s done!” Syd Squid yelled. “This will be delicious,” she said excitedly, as she pulled the seaweed soufflé out of the oven. The soufflé was puffed up like a blowfish’s belly.

But as she put the soufflé on the table to cool, Lenny Lobster’s head bumped into the overhead pot rack. All of the pots came crashing down. Syd tried to cover the soufflé, but it collapsed like a marshmallow in a microwave. “Lenny!” she yelled.

Lenny was trying to get a frying pan down for Seamore Seahorse, who was cooking plankton patties. “At least I got the pan for you, Seamore,” he winced.

After they picked up the pots, Seamore began flipping the plankton patties. He and Lenny were having lots of fun when he flipped one too hard. The plankton patty landed in the middle of the papayas that Sunny was peeling to put into a sweet papaya pie, her favorite dish.

Seamore flipped another plankton patty. This time, it was headed directly at Crusty, who jumped to get out of the way of the hot patty, and he knocked the other plate of patties that Lenny had made onto the floor.

“Crusty! Now what are we going to do? We won’t have a main dish,” Lenny scolded.

“Well, it was Seamore’s fault,” Crusty said, pointing at Seamore. “He was the one who flipped the patty at me.”

“We won’t have any of the other dishes ready for dinner either,” Sunny wailed. “They’re all ruined.”

“Clarice Clam left the kelp casserole in the oven too long, and it burned to a crisp,” she continued. “Maybe we should just have the dessert and coconut milk.”

“You can forget about the coconut milk,” Ollie Oyster said. “Lenny just drank the last drop.”

“Well, we still have the sweet papaya pie I made,” Sunny smiled. “I’ll put some extra whipped cream on it,” she added, holding the pie up for everyone to see. She grabbed a can of whipped cream from the refrigerator and turned around. At that moment, she slipped on the floor, which was covered with grease from the half-cooked plankton patties. The sweet papaya pie flew high into the air. Sunny screamed, and everyone looked up.

SMACK! The pie landed on Crusty’s head, and papaya filling and whipped cream dripped down his face.

“At least I got a piece of pie. Mmm, this is good,” Crusty laughed.

“Hey, save some for me!” Lenny exclaimed.

Hearing the commotion, Sunny’s mom ran into the kitchen. “What happened in here?” she asked, looking at the mess.

“No, you didn’t,” Sunny’s mom said, trying to comfort her.

“But what’s Thanksgiving without a dinner?” Sunny asked.

“Thanksgiving isn’t about what you put in your stomach, but about what comes from your heart,” her mom answered.

That evening when the Cove Kids presented a Thanksgiving feast of pineapple jelly sandwiches and lemonade, Sunny read Psalm 100:4. She suggested that they all tell one thing they were thankful for.

“I’m thankful for my mom and dad,” she began.

“I’m thankful we don’t have to eat what we cooked,” Crusty chuckled.

(Editor’s note: Sand Dollar Cove is a series of children’s stories that appeared in The Baptist Courier from 2000-2006.) 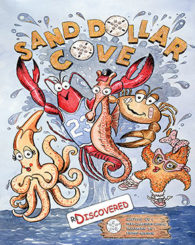 Read more of the Cove Kids’ adventures in the new “Sand Dollar Cove: Rediscovered!” book published by Courier Publishing. Available now — in time for Christmas gifts for kids and grandkids — from BarnesandNoble.com and Amazon.com. For more information, visit CourierPublishing.com.