Baptist Friendship House has stood as a beacon of hope in the heart of New Orleans for 75 years. For the past 20-plus years, Kay Bennett has played a key role in sharing that hope with area residents in need.

“What keeps me motivated is the fulfillment of watching God work miracles in people’s lives,” explained Bennett, who has served as Friendship House’s executive director since 1997.

The ministry center, which first opened its doors in 1944, has operated from its current location a few blocks from New Orleans’ famed French Quarter since 1947. “Over the years, the different ministries have kind of changed at Friendship House to meet the needs that are the greatest in our city,” Bennett said. “That’s kept it alive and vibrant as it has changed.” 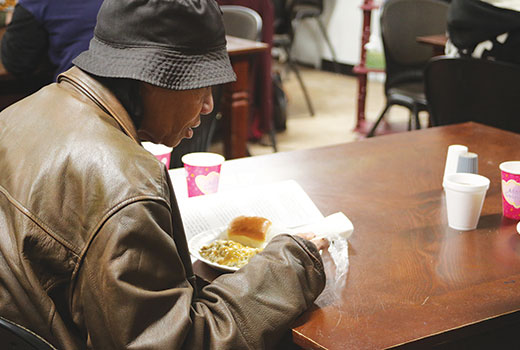 Providing such practical resources as food, clothing and shelter is a
key part of Baptist Friendship House’s ministry to New Orleans residents.

As Baptist Friendship House marked its 75th anniversary this year, current ministries include aiding the homeless with such basic necessities as food, showers and clothing; transitional housing for women, including mothers with their children; and day programs such as literacy, English as a Second Language, job readiness training and a community Bible study. Staff members also offer practical assistance to human trafficking survivors, ranging from providing temporary housing or connecting survivors with a safe house to arranging for involvement in long-term treatment programs or transportation back home.

Friendship House also partners with National Woman’s Missionary Union to provide Christian Women’s Job Corps and WorldCrafts ministries, and with the Southern Baptist North American Mission Board in providing thousands of backpacks filled with a variety of items for schoolchildren, the homeless and those escaping human trafficking.

A Lighthouse in the City

Reflecting on the center’s day-to-day ministry impact, Bennett said, “You can see someone that is at the bottom who may be addicted and homeless and on the street, and you realize when they come through the door that you can’t change that person — but you do know that Jesus can work in their lives. He can melt their hearts and bring healing, and you can see them just totally turn their lives around and change. It is so fulfilling to watch how He works and changes them. 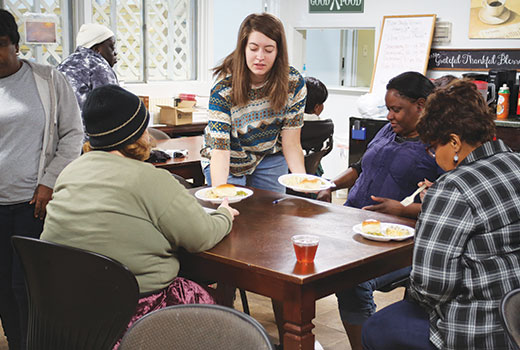 “It’s just really cool to me to be able to be in a setting that has been here for so long because it’s like a lighthouse in the city,” she emphasized. “New Orleans is known as the city that care forgot, but here at Friendship House, we try to put a little bit of concern and care and help and hope back in our people.”

With a well-earned reputation for making a difference in people’s lives, Baptist Friendship House recently was among organizations honored by FBI Director Christopher Wray, who presented the ministry center with its distinguished Director’s Community Leadership Award for its work in fighting human trafficking.

“For many years, the FBI New Orleans field office and the Baptist Friendship House have worked together to combat human trafficking in the city of New Orleans,” said Eric Rommal, FBI New Orleans special agent in charge. “Their staff continues to serve the shelter with compassion, dedication and professionalism.”

Bennett accepted the award on behalf of Baptist Friendship House at FBI headquarters in Washington, D.C. “Human trafficking is the fastest-growing criminal industry in the world, and it is all around us here in the United States,” she pointed out. “I think it’s very important that we, as Southern Baptists, look around us, assess needs, see what’s going on and reach out to help people.”

Quoting 1 John 3:17-18, “If you have all that you need and see someone else in need and do not reach out to them, how can the love of God be in you? Let us not love merely through words and tongue but in action and in truth,” Bennett said that is among the biblical truths that drive the center’s ministries.

“Our mission statement simply states, ‘Meeting needs through love, action and truth.’ We do that by basically walking alongside others and doing life with them,” she noted. “It is in meeting people’s basic physical and emotional needs that it opens the door for us to minister to the greatest need of all — which is the spiritual need — so that a life-changing relationship can begin with Jesus Christ.” 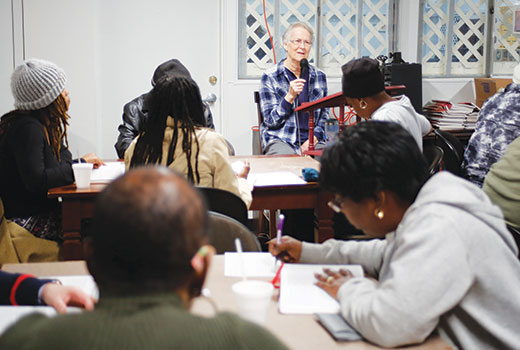 Peggy Day, one of Baptist Friendship House’s ministry volunteers, leads a weekly community Bible study for area residents. “The ladies are so receptive,” she said. “They just are so hungry for the word.”

Peggy Day, who leads Friendship House’s weekly community Bible study, said that perspective is typical of Bennett’s ministry commitment. “She is such a blessing. She just never gives us. She’s always hopeful and always positive and always encouraging and accepting,” Day affirmed. “One of the big things here is that everybody is treated alike, they’re accepted.”

Inviting individuals, churches and mission groups to join the effort, she said volunteer opportunities range from helping pack hygiene kits and snack packs or preparing meals for Bible studies, to donating food and clothing or helping staff such annual events as Friendship Fest, Back to School Bash and Fall Festival. To learn more, call 504-949-4469 or email bfhjobs@aol.com.

— Trennis Henderson is a WMU national correspondent. With additional reporting by Baptist Press.