A number of years ago, the Lord placed in David Dyer’s heart a desire to pursue a vocational ministry.

As a student at Charleston Southern University, he began preparing for a life of ministry. He joined a growing number of young people who — having surrendered to a call to ministry — chose to participate in the Summit Labs being offered by Summit Baptist Church.

Summit Baptist Church has been meeting in Lightsey Chapel at Charleston Southern University for some time. “It’s a prime spot for college students to really go to church because they can kind of wake up and walk over,” said the church’s executive pastor, Nick Ballenger.

From October to March, on Sunday nights in CSU’s Whitfield Center for Christian Leadership, church leaders have been offering one-hour sessions to disciple and train the next generation of pastors, church planters and missionaries. Ballenger, who also works as director of enrollment services at CSU, leads the sessions, which have been dubbed “Summit Labs.”

“We want to equip these people in such a way by teaching them, by training them, by bringing in other ministers who know more than us, by providing good resources, by meeting with them and holding them accountable, and by seeing the fruit (of the Spirit) grow in their lives,” he said. “Then — and this is the lab part — we want to give them ‘reps’ (in preaching messages).” 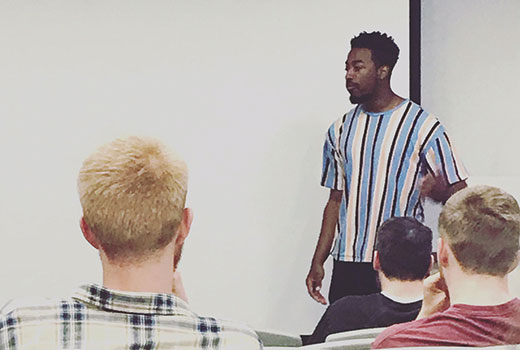 During his senior year of high school, Dyer had an opportunity to travel to Africa for three weeks over a Christmas break. “This trip enlightened my eyes to ministry, and after a following trip to Haiti, my heart was hooked toward overseas missions,” he said.

Dyer has interned at Summit Church during his college years. “This church lovingly opened their arms to allow me and a few other students to practice what we felt the Lord had placed on our hearts,” he said.

Summit’s staff recently presented to the church body five students who have committed their lives to ministry for ordination, and Dyer was among them. A recent graduate of CSU with a degree in Christian studies, he plans to pursue a master of divinity degree in missiology from Southeastern Baptist Theological Seminary.

While serving as associate pastor of discipleship and missions at Summit Church, Dyer also has been working as executive administrator for Christian studies and campus ministries at Charleston Southern.

“Having the chance to teach in Bible studies and organize the administrative details of a collegiate ministry, Summit gave us some valuable tools that a university is unable to fully do,” Dyer said. Summit Labs, he added, gave participants “a practical understanding of what it means to be a pastor.”

Although he doesn’t feel the Lord is directing him toward pastoral ministry, Dyer said, “I really appreciated the class, as it will prepare me for practical ministry anywhere in the world. If my heart is to spread the gospel to the nations, I want to have every opportunity possible to best equip me for this task.

“To have the chance to learn from one who is experienced, hear from other ministers and their stories, and to practice the gifts God has given, these laid the foundations of discipleship in me,” he said. 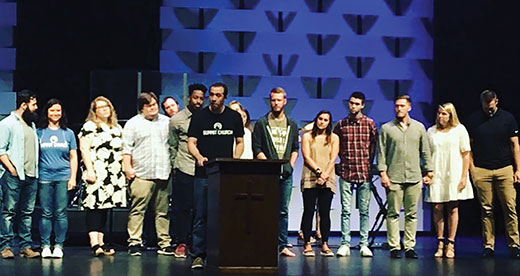 Executive Pastor Nick Ballenger preaches the licensing sermon at Summit Church for candidates from the first group of Summit Labs participants and their wives. (Submitted photo)

Jonathan Franklin, a 2015 graduate of CSU, is another Summit Labs participant who was recently ordained by the church. Franklin, a pastoral resident at The Church at Greer Station in Greer, is looking to plant a church with the North American Mission Board, perhaps in Nova Scotia, according to Ballenger.

Like Dyer, he chose to participate in Summit Labs out of a desire to learn more about what it means to be a pastor and “to seek wisdom from those who are wiser than I am and whom I admire and look up to greatly,” Franklin said.

In 20-minute segments at each lab session, participants explore some of the ecclesiological, expository teaching and practical aspects of pastoral ministry, such as dealing with crises, change, staff problems and congregational issues. Guest ministers and seminary professors were sometimes brought in to share from their own expertise and experiences.

Franklin found these sessions “incredibly beneficial” in preparing for his future ministry. “We talked with several pastors who have served in different contexts and congregations and learned from their triumphs and hardships,” he recounted, expressing gratitude to Summit leaders “for teaching me, challenging me, and ultimately ordaining me.”

After the lab sessions, one of the participants may have the opportunity to preach for Summit’s Sunday evening services.

“Our church understands what we’re trying to do. They understand that the sermon they hear may be really good. Or it may be something that needs a lot of work,” Ballenger explained. “The pastor or future pastor may be somebody who needs to do it 10 to 15 more times — just like everybody else. So we like to give them as many reps as possible.”

Ballenger noted that lab participants also are available to preach in the churches of Charleston Baptist Association. “We’ve let them know that if anybody needs somebody to come in and do pulpit supply, or anything like that,” he said, “we’ve got some guys who are itching and want to do well, and who need a place to really do a good job with their sermons.”

Summit Church recently began its second sessions of Summit Labs. And, although the impetus for the labs was several guys who were seeking training as pastors, the new class includes a female who wants to become a missionary.

“Our job as a church is to equip people, and we want to make disciples,” Ballenger concluded. “We want to be a place that grows people — and grows people not only for discipleship methods and to be part our church, but more so, we want to grow people so we can send them out to strengthen other churches.”