Jeff Scott is the new head football coach at the University of South Florida — and while this is his first head coaching job, he enters it with three strong priorities that have been firmly developed throughout his life: faith, family, and football. 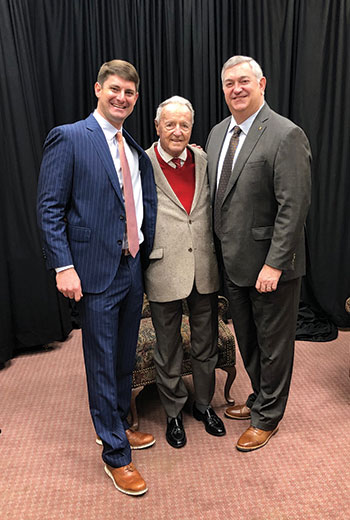 Brad was an assistant coach at Florida State and worked as offensive coordinator in 1993 when the team won the national championship. In 1994, Brad and his wife, Daryle, with their sons Jeff and John, moved to Columbia when Brad was named the head coach at the University of South Carolina. Jeff was on the sidelines with his dad much of the time at Florida State and all but one game at USC.

Brad said, “I used to pick Jeff up from school and take him on recruiting trips with me. That was back when the rules were not as strict as they are now.”

Brad led the Gamecocks to their first bowl victory in school history. After five years, he was dismissed as head coach.

During those painful days, Jeremiah 29:11 was the

verse the family relied on. It has become a theme of their lives over the years. “‘For I know the plans that I have for you,’ declares the Lord, ‘plans for welfare and not for calamity to give you a future and a hope.’” When Brad was notified he was “being let go,” he called his boys to the sunroom of their home in Columbia for a discussion. “I told them, ‘Boys, we have talked about being witnesses for Christ, and tomorrow will be our biggest chance to share the testimony of who we are as a family. We are going to stand on our faith and let our witness shine. Our best days are not behind us. They are in front of us.”

Jeff, a senior in high school at the time, had been offered a scholarship to play football at Furman. A few days after the door closed for Brad in Columbia, another door opened at Clemson when head coach Tommy Bowden offered him a job as associate head coach. Jeff was offered a position on the team as a walk-on wide receiver. He later enrolled at Clemson and realized one of his life goals. “It was a dream come true for me. I had always wanted to play on a team my dad coached. While at Clemson, I also met my future wife, Sara,” Jeff said. 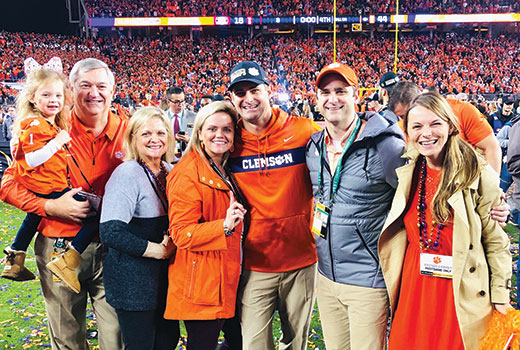 Brad has been at Clemson for 21 years, either as a coach or assistant athletic director. He also has two national championship rings to add with the one he has from Florida State and great gratitude for the blessings of God in his and Daryle’s life, and in the lives of Jeff and John.

John’s life is a story in and of itself. He went to Harvard on a football scholarship and started a Bible study for football players. He played four years, but his main goal was to become a medical doctor. After graduating from Harvard, he went to Vanderbilt Medical School and did his residency at the prestigious Brigham and Women’s Hospital in Boston. Also during this time, he added a master’s degree in public health. Today, he is a trauma surgeon at the University of Michigan Hospital and also teaches some at the University Medical School. Brad says John knew he wanted to be a doctor since he was in the second grade.

John’s wife, Kirstin, also graduated from Harvard, earning a Ph.D. in health care policy. They have done medical missions in Nigeria and Rwanda, and have a commitment to serve the needy and underprivileged with quality medical care. Kirstin decided she would get her medical degree while John was doing his years of specialty training and residencies. She will graduate this May, and her specialty is emergency medicine.

John and Kirstin met when they both spoke at the funeral of John’s Harvard roommate, Joey. After Harvard, Joey went to law school at Yale, but he tried to connect John and Kirstin, especially after he discovered Kirstin was a Christian and her favorite book was the Bible. Less than a year after the funeral, John and Kirstin were married. “They are committed to serving God wherever that may be,” Brad said. 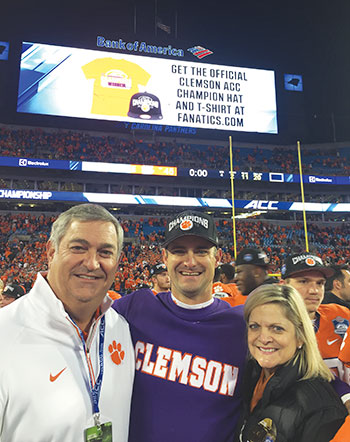 After graduation from Clemson, Jeff and Sara got jobs teaching, and he became an assistant coach at Ridgeview High School, where he worked with wide receivers and quarterbacks. At the end of his second year, Principal Sharon Buddin, a person he said “was the first person, outside of my family, to really believe in me,” left to help start the new Blythewood High School. “It was a $50 million school with a $5 million football stadium. I wanted to go there as the offensive coordinator for the football team they would have in the future, but Dr. Buddin encouraged me to apply for the head coaching position.” Over 100 resumes were received — some from coaches who had already won state championships. Jeff was rejected by the board of trustees because he was young and inexperienced as a head coach, and experienced coaches who had already won state championships were available.

Buddin appealed two weeks later to the board, and Jeff was hired. In the start-up season, they played a junior varsity schedule with ninth and 10th graders. They posted a 10-1 season. The following year included juniors and was their first varsity season. They lost the first game to Ridgeview and went on to go undefeated and win the state championship.

The following year, he accepted an assistant coaching position at Presbyterian College, even though he was looking forward to the next season at Blythewood, where he had the entire team returning. He prayed through that decision and shared with Buddin, “I think God has a sense of humor. He is reminding me — and us — that He’s in charge and not us, regarding the plan He has for my life.” Buddin was disappointed but pledged her support to him.

The next year brought another change. Jeff took a graduate assistant job and a pay cut to return to his alma mater. He and Dabo Swinney got to be friends and worked together with the football camps at Clemson. In 2008, Swinney told him, “You did a great job helping me with the camps. When I become a head coach, you are going to be one of the first guys I hire.” On Oct. 13 of that year, Tommy Bowden resigned as head coach and Swinney was named interim head coach. He called Jeff and said, “I want you to be the wide-receivers coach, and if I get the job as head coach, I want to keep you on.” That night, Jeff and Sara watched ESPN stream a message on the bottom of the TV screen that zero of the last 29 mid-season interim head coaches went on to be named head coach. Jeff told Sara, “Well, the odds are better than the lottery.”

Swinney was named head coach and Jeff served as wide-receivers coach until 2014, when he and Tony Elliott were named co-offensive coordinators. He said, “Coach Swinney was the second person outside of my family who really believed in me. From that first phone call with Coach Swinney telling me that South Florida had reached out to him, all the way through when I was offered the job, I had a peace about it. It was one of those things from the very beginning that I felt like God was in control.” 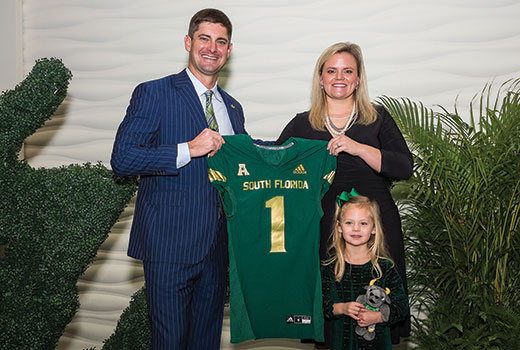 This past December, he accepted his first head coaching position at the University of South Florida, where his dad earned his undergraduate degree. His first decision as head coach was to have a conversation with his dad. “Will you be my first hire?” he asked. Brad replied, “Absolutely.” Brad’s position has not yet been determined, but it will be an administrative role. He says, “I want to be able to support and advise the head coach and help with some of the busyness so he can focus on being the head coach.” They both were hired as head coaches when they were 39, although Jeff is a younger 39 than Brad was when he was hired.

Brad said, “How blessed am I to finish my career walking side by side with my son? I am confident Jeff will be successful at South Florida, not just on the scoreboard, but in the lives of his players. Both our boys have been blessed.”

Brad’s parents both died last year within four months of each other. John spoke at his grandmother’s funeral and Jeff spoke at his grandfather’s funeral. Daryle’s dad, who was a Southern Baptist pastor, performed the marriage ceremony for both his grandsons and their brides. He passed away a few years ago, but his wife, although blind, continues to teach a Bible study at her skilled nursing residence.

Brad said, “She is one of the smartest ladies I have ever known. She teaches that weekly Bible study, and half the community comes to hear her. Since she can’t read anymore, she just quotes Scripture. She is a prayer warrior. Both our boys have been wrapped in prayer from our parents.”

Brad has frequently shared Psalm 119:105 with his sons: “Thy word is a lamp to my feet, and a light to my path.” He says, “I would tell them that a lamp is like a shadow. It gives light, but you can only see one or two steps at a time. I’d always tell them that God is shining that light, and it’s just there for one step at a time. I am pretty proud of my boys, but I am mostly proud of their testimony and who they are. In my opinion, it was God’s intervention for both of them to be where they are right now. He made a way, and they chose to honor and follow him. We are blessed. We certainly are.”

Jeff said, “For the first 28 years of my life, I was looked at as Coach Scott’s son — and for the last 11 years, the roles have flipped some and he has turned into Coach Scott’s dad. The greatest compliment I can give my dad is that I chose to grow up to be just like him.”

Even though Jeff was reluctant to embrace Jeremiah 29:11 when his dad shared it with him and John following the dismissal at South Carolina, he admits it has become a theme verse for them.

As Jeff, Sara, and their daughter Savannah transition to a new location in their football pilgrimage, his three key priorities remain unchanged: “It’s been truly faith, family, and football from the very beginning.”