How do you breathe new life into an historic, declining congregation?

For First Baptist Church of Cayce, the answer was merging with a recent church start that was growing and needed more space.

Formed in 1912, First Cayce grew to a peak of about 500 attending Sunday school near the mid-century mark. In recent years, however, the congregation was dwindling, seemingly as rapid as it once had grown.

When Ken Harmon arrived as a transitional pastor in August 2018, the congregation had “gone way down from what it once was,” he said. So he encouraged them to explore their options moving forward.

They sought Director of Missions Johnny Rumbough’s advice. One of his suggestions was to consider uniting with a new church start. “Immediately, our renewal team thought, ‘Let’s look into it,’” Harmon recalled.

Rumbough connected them with Mill City Church, which was thinking about buying land and constructing its first building. Mill City, a church plant that was associated with the Send Network of the North American Mission Board, began in 2013 as a single community group of eight people that met in the home of Chet Phillips. The group had grown quickly to six cell groups and was meeting at a school. 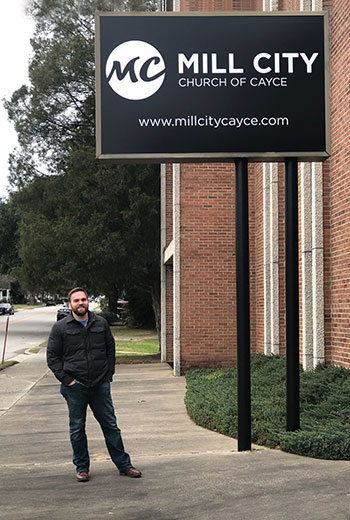 Mill City Church of Cayce was chosen as the combined congregation’s new name, paying tribute to both groups and the community.

“I think the merger was necessary, not so much for financial reasons, but for just having people and keeping the church doors open,” said Louise Wise, a longtime First Cayce member. “We had two families with a couple of children, but we had mainly become a senior adult church.”

Early on, merger wasn’t really on Mill City’s radar, Phillips said. “Basically, the understanding was that they had a lot of facility that was paid off and some stability and maturity, but they had no children and no young families,” he explained. “We had children and young families, but no facilities, no real stability and not a whole lot of maturity. It just seemed like we paired well together.”

The two groups started conversations last June and hit it off. “We liked them; they liked us,” Phillips said. “The humility, openness and graciousness of their transition team and from the whole church family, we just were blown away by it. So we kept meeting and talking through what things would look like and what we cared about.”

After a good faith agreement was reached, the remaining members of the Cayce congregation voted 29-6 in November to proceed with the merger. The two groups united on the first Sunday in January.

Mill City at Cayce was chosen as their new name, paying tribute to both groups and the community. “We added Cayce because we wanted to acknowledge the roots of First Baptist Church of Cayce, and the Cayce family that helped get it and the Cayce area started,” Phillips explained.

There were some adjustments to make, though. Mill City was an elder-led congregation led by a full-time pastor, Phillips, and three bivocational ministers — Spencer Carey, pastoral care; Matt Freeman, music; and Ray Bradley, children and media. Freeman serves on the South Carolina Baptist Convention’s staff.

Mill City was built around community groups but agreed to still offer a traditional Sunday school, while the weekly prayer meeting would become a community group. Cayce’s older members prefer to sing hymns and have a choir, while Mill City’s younger members like contemporary songs led by a vocal team, so a more blended approach is being incorporated.

“We kept telling people, this will change a little as we go because we’re trying to adapt to a new situation and new people and new ways of doing things on both sides. So there are going to be some rough spots along the way,” Harmon said. “But so far, we’ve been able to iron those out.”

From the start, though, things have run more smoothly than imagined. “The people who were left at Cayce have to be commended because they were willing to sacrifice their preferences to keep a Bible church in the community that was reaching people,” he said.

“We were surprised at how well the merger went,” agreed Wise, who now serves as an administrator for Mill City at Cayce. “They’ve moved in here, and it’s just like they’ve been here all the time.”

Mill City brought an influx of about 100 adult members and 30 children, and more new families are coming. The transformation is apparent. “Now we have all kinds of young people and all kinds of children,” said Wise.

Looking back on the whole process, Harmon, whose interim duties drew to a close in March, can see how God has been at work for years to bring both congregations together.

“The changes that Pete Cassidy [the previous pastor] led the congregation to make helped prepare for the union,” he noted. “Even the style of the sanctuary, which was built in 1974, is well suited to a contemporary style of worship.

“At the same time, God was producing rapid growth in the Mill City Church and giving its leaders an openness to follow wherever the Lord led, even into a merger,” he continued.

“It’s been one of the most exciting things I’ve ever worked with,” Harmon said. “It was just so evident through this whole process that the Lord was guiding and directing and enabling all the way.”