The latest Centers for Disease Control and Prevention (CDC) guidance for groups during the COVID-19 coronavirus outbreak recommended no gatherings of more than 50 people (the CDC later changed this to 10 people or less) for eight weeks. As churches scramble to make decisions on how to move forward, new research finds many congregations are not prepared to shift their services online.

A study from Nashville-based LifeWay Research conducted last fall found 41 percent of pastors say they don’t put any portion of their church service online for people to view.

“As new technologies have emerged, churches have placed their primary weekly worship service online in much the same way they did with radio and television,” said Scott McConnell, executive director of LifeWay Research.

“However, instead of only a few churches in each city broadcasting their service, online and streaming are economical enough for churches of all types to take advantage of the medium.” 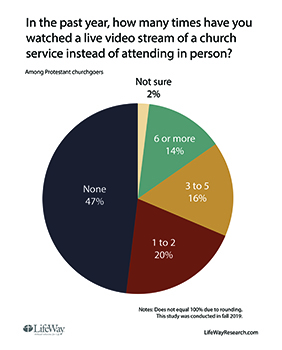 In a related survey conducted last year, half of Protestant churchgoers (50 percent) say they watched a livestream in place of in-person church attendance at least once in the past year.

Slightly less than half of all Protestant churchgoers (47 percent) say they haven’t watched a church service through a livestream as a replacement for in-person attendance in the past year. Two percent are not sure how many times, if any, they used livestreaming as a replacement.

“If they need to, almost a third of churches can gather virtually this week using technology and processes they already have in place,” said McConnell.

“Half of churchgoers have recent experience livestreaming a church service. And churches impacted first by CDC’s COVID-19 mitigation guidelines — those with attendance above 250 — are most prepared to provide their service online.”

Both Protestant pastors and churchgoers see some reasons for streaming a worship service as more valid than others.

A majority of pastors say viewing a live online video stream of a local church’s worship service is a valid replacement for physically attending church when sick or caring for someone who is sick (83 percent), a non-attendee wants to know more about the church or its teaching (77 percent), and when traveling (63 percent).

Among churchgoers, majorities see watching online as a valid replacement when someone is sick or caring for another (76 percent) and when traveling (60 percent).

Fewer believe livestreaming services is an acceptable alternative when you live too far away to attend (45 percent) or get up late (36 percent).

Churchgoers are less likely than their pastors to believe livestreaming a service is a valid replacement when a non-attendee wants to know more about the church or its teaching (32 percent), or simply whenever someone wants to watch online instead of physically attending church services (27 percent).

There may be confusion among churchgoers about when streaming is acceptable or not, because even at churches where streaming is an available option, many pastors have never told their congregation what they think about it.

Slightly more than half (55 percent) of Protestant pastors who regularly livestream at least part of their service say they have communicated their views on livestreamed services to their church, while 45 percent say they haven’t.

“Current health concerns give churchgoers another reason to take advantage of remote attendance,” said McConnell. “The long-term question is whether churches can convince viewers there is more to church than just video content on a screen.”

For more information on this study, visit LifeWayResearch.com or download the complete pastors and churchgoers reports.

— Aaron Earls is a writer for LifeWay Christian Resources.