The two DOMs have invested “tremendous time and energy in disaster relief over the past several years as hurricane after hurricane, flood after flood, affected their parts of the state — Florence and Waccamaw Baptist associations,” Creamer told The Baptist Courier. They have assisted not only their own communities, but also neighboring associations, he added.

Smith has led Florence Baptists to be engaged hands-on in missions, Creamer noted. “From local opportunities to international mission experiences, Chris has led the FBA in developing as one of the strongest partners in South Carolina,” he said. “Personally, Chris is the first person I consult and depend on when facing challenges in his area.” 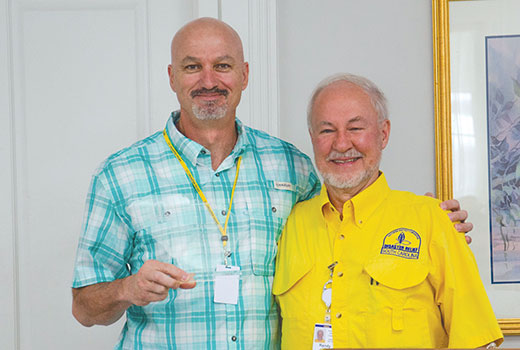 Richardson’s first several years in Horry County saw a series of natural disasters of historic proportions. “But Tommy seized the opportunity to serve with his pastors and churches, and I believe their association is stronger today for having come through these storms,” Creamer said. “Whether it was hosting students with World Changers or staying engaged with recovery efforts, as the key local leader, Tommy was instrumental in assisting countless persons to regain hope and peace through Jesus Christ.”

“The two DOMs assisted with coordination and communication to get the command sites up and running and to keep the work moving forward so that people’s needs were met in Jesus’ name,” Creamer said.

After immediate needs were met, SCBDR partnered with the DOMs and their associations to conduct RebuildSC — an initiative to repair homes damaged by flooding. “Because of them we were able to repair hundreds of homes for needy people, sharing the hope of the gospel all along the way,” Creamer said.

Because of its strategic location, Smith also has been instrumental in providing a site at the Florence Association office building for staging supplies and equipment for future disaster responses to events along South Carolina’s northern coast and the Pee Dee region, he added.

The new DR award is named in honor of Cliff Satterwhite, who retired as director of South Carolina Baptist Convention Disaster Relief in 2014. Satterwhite served in various capacities over the span of four decades of service with the state convention, and was well known for his work as director of McCall Royal Ambassador Camp and for developing and implementing the SCBC’s Disaster Relief program.

“Cliff’s handprints are on much of what exists in South Carolina as well as on the development of national Southern Baptist Disaster Relief, which has become one of the top three volunteer disaster response organizations in the United States,” Creamer said.