While the COVID-19 pandemic is preventing congregations from meeting together inside their sanctuaries, South Carolina Baptists are discovering creative ways to worship — while adhering to social distancing guidelines — making for a memorable Easter observance this year.

Across the nation, as Easter approached, seven in 10 pastors were planning to hold digital services, with more than half (57 percent) attempting to livestream worship and one in four recording an Easter message to send to church members, according to a recent Barna study. Others (10 percent) said they were having outdoor services.

“I think we really are in for the first digital Easter,” Barna president David Kinnaman predicted in a news release. “I think it’s really neat to see the Church rising to the challenge of trying to respond to the health crisis of COVID-19 and also continue to talk about the message of Jesus in our times,” he said.

Many South Carolina churches turned to various forms of social media and livestreaming to continue sharing the gospel, and some, like Mayo First Baptist, even moved services outside their church walls. 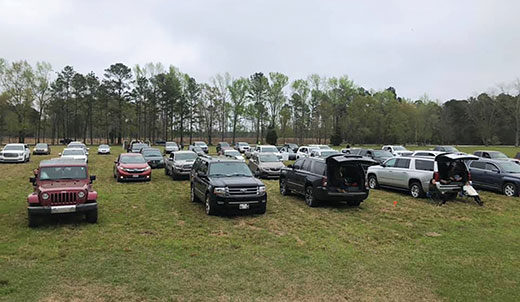 Mayo First has been parking cars, spaced well apart, on its softball field on Sundays, and Pastor Glenn Rusher preaches from the porch of its fellowship building. While he still extends an invitation, masks are available for use in counseling if someone responds.

The church’s parking-lot services are going well, Pastor Rusher reported. He counted about 48 carloads at its first service, which quickly grew to more than 60 for its second and third services, leading up to Easter Sunday.

Attendance has been close to usual Sunday morning numbers, but also included in the crowd were several guests. “Eight cars with people from other churches have attended each service,” he noted, adding that a pastor of a Wesleyan church in Chesnee who had attended each service was invited to preach and provide special music in April.

Mayo’s services are being livestreamed on Facebook. For that first service, by Sunday evening the number of hits surpassed 1,350, he said. “Typically, we get about 400 to 500 hits per service, and that includes several days following it,” he added. 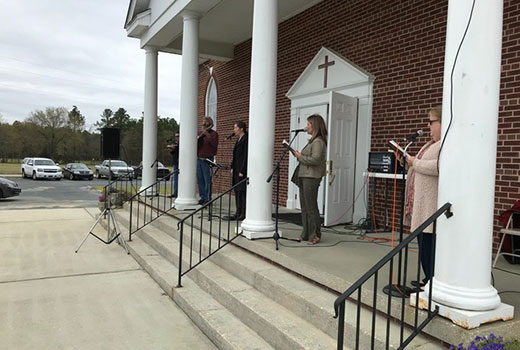 The response has been very positive, Rusher said, and he’s anticipating the numbers will continue to grow both for the drive-in service and its online audience. Perhaps as noteworthy, offerings for the first three services have equaled 96 percent of the church’s total contributions for the previous three Sundays when the church met in its sanctuary. “So, the situation and the fact that we are assembling outside, rather than inside, does not seem to have affected us financially,” he reported.

Some, like First Baptist Church of Barnwell, have turned back the clock, reviving a drive-in theater approach of half a century ago. Pastor Bart Kelley said Barnwell First has begun offering a “drive-in church” for the community at the city’s Veterans Park.

By tuning car radios to a short-range FM transmitter, attendees can listen to their worship services. Words to songs and Scripture are posted online so worshipers can follow on their phones, and text messages are being used to connect with the people.

“We are using the ‘text method’ to reach those who are getting saved, asking for prayer, and doing the welcome,” Kelley said. “They simply text ‘Jesus’ for salvation, ‘Pray’ if they’d like someone to pray for them, and ‘Welcome’ to let us know they’re present,” he said. “It’s pretty cool!”

The church had someone to text a message to receive salvation the first week they did it, Pastor Kelley said. They’ve had more than 40 prayer requests, and the welcome text messages alone have produced 32 new contacts, he reported. 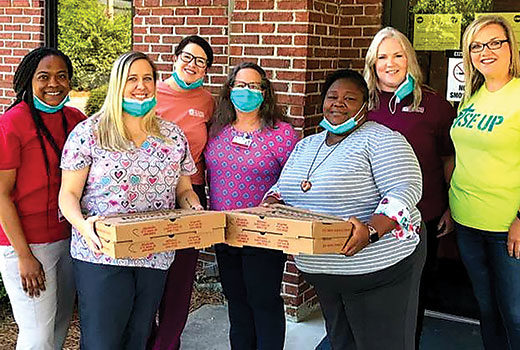 Barnwell First is providing weekly lunches for police, fire and medical workers to show how much they are appreciated for all the additional hours that they are putting in during the pandemic.

Children at Barnwell First are being encouraged to write “thank you” letters to police, firemen and medical workers, and the church’s soup kitchen has been extended to the homeless, seniors on fixed incomes, truck drivers, families in need, and shut-ins.

“Basically, we’ve gone from providing 50 to 60 meals a day to about 200,” Kelley said. “We also are taking lunch to a medical center for the working staff on Wednesdays to simply show love and express appreciation,” he said. The church planned to deliver hand sanitizer and 700 medical masks to every medical center, police and fire department, urgent care, and emergency room facility in the county, he added.

“Everyone keeps saying how they can’t wait for things to get back to normal, but should that apply to the church?” Kelley asked. “Look at it this way: The pandemic has forced every church (no matter the size) to get out of its four walls and into the world with the gospel. From the pew to the pavement, traditional routine ways of doing ministry can’t be used, and it’s forcing and challenging churches to share the gospel in new and innovative methods,” he said. “I, for one, find it invigorating!” 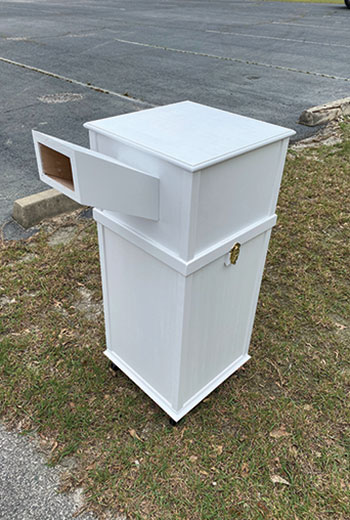 A member of Bethany Westville Baptist Church, Daryl Truesdale, made an offering dropbox for members to place offerings in as they leave drive-in services.

At Bethany Westville Baptist Church in northern Kershaw County, Pastor Craigen Blankenship described the drive-in style service as “a blessing.” Its first drive-in service saw more than 80 cars with around 250 people attending, he estimated. Like others, Bethany Westville is using Facebook to livestream services.

“Praying for you all, that God would use these times for His glory as He teaches us new ways to do ministry,” he said. A church member built an offering box for people to drop offerings in as they left the parking lot on Sundays.

For some pastors, however, this marks their first time to livestream worship services. Pastor Richard Busha at New Horizon Church in Anderson, for instance, set a tablet on a music stand and focused its camera on the pulpit area. On Sunday morning, March 22, his wife pressed the Go Live button for him and “it was on.”

“We probably reached 10 times the people we would have ministered to in person,” said Busha, who leads a new church start, which “on a good day” sees maybe 30 people in attendance. “At last count, I saw 650-plus views and 15 shares,” he said.

For others, livestreaming services on several social platforms has become the norm. Yet, going “online only” has meant exploring some format changes.

Benji Ladd, executive pastor at Brushy Creek Baptist in Taylors, said church leaders wanted its online worship experience to be more interactive and engaging. Watching online is different from being present in a room, he observed. “We felt we definitely had to shorten the sermon and allow viewers to engage by hearing from a panel of staff members and by texting in their own questions,” he explained.

The approach has proven popular, Interim Pastor Tony Beam noted, adding that he has received so many questions from viewers that he had to take a good number home to answer later. More than 2,600 households watch on Facebook, and an additional 500 view its service on other social media platforms, he said. “We’re excited by the response, and we’d like to find a way to continue this interaction even after our services can return on campus,” Beam said.

During the coronavirus outbreak, many South Carolina pastors are finding out that improving their church’s livestreaming capabilities and social media ministry may help reshape and retool their ministries even long after members are able to return to their regular meeting places.