The coronavirus outbreak has had some profound effects on Baptist churches across the state, according to an online study of pastors conducted by The Baptist Courier in May.

The Courier asked South Carolina Baptist pastors how the pandemic has impacted their congregations and what their plans are for the near future.

As churches moved away from in-person gatherings during the coronavirus outbreak, many transitioned to some form of drive-in or livestream services and began offering online giving options.

Nationally, a LifeWay Research survey found around 1 in 5 pastors (22 percent) said their churches were already livestreaming worship services before the coronavirus pandemic, and they are continuing to do so. More than 2 in 5 (43 percent) of pastors said they don’t typically livestream their sermons or worship services, but they had begun to do so because of the coronavirus. 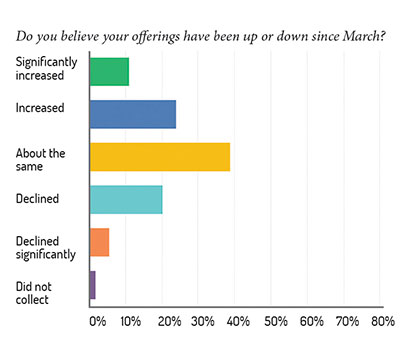 The Courier’s survey, however, found that among South Carolina pastors, that number was even higher, with nearly 3 in 5 (57.4 percent) beginning livestreaming worship services as a result of the pandemic. When combined with South Carolina churches that were already livestreaming services, the total jumps to more than 4 in 5 pastors saying their churches are now providing members with a way to worship together online.

Fewer than 1 in 10 Protestant pastors (8 percent) who responded to LifeWay’s survey said they did not provide any video sermons or worship services during the past few months. The Courier’s survey, however, found less than 4 percent of the South Carolina churches that responded to its survey were not offering a digital service of some type.

About 2 in 5 (37 percent) S.C. churches surveyed have begun a drive-in service on church property or at a park or theatre during recent months. About half, however, did not meet in an outdoor service or sanctuary.

Meanwhile, nearly 3 in 5 pastors (57.4 percent) whose churches have moved online reported attendance was significantly higher. When combined with pastors who said viewership was a little higher, almost three-fourths of the churches are seeing audiences larger than an average Sunday’s attendance. 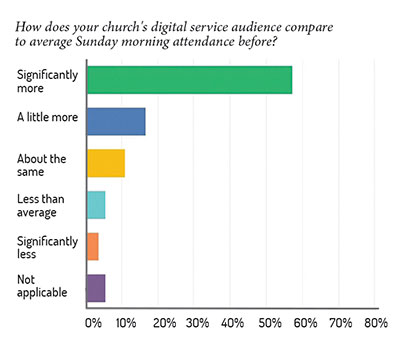 Add in those who said online worshipers were about the same, and 85 percent have found providing opportunities for online worship to be a good temporary option during the pandemic, though not an adequate replacement for in-person gatherings.

“The rapid adoption of providing video content has been just as abrupt as ceasing in-person meetings,” observed Scott McConnell, executive director of LifeWay Research. “Churches who never would have considered offering a streaming or video option have quickly done so. Their pastors were compelled to stay connected and to continue to provide spiritual guidance during this trying time.”

Nationally, more than half of congregations (55 percent) said they moved some Sunday school or small groups online, while 6 percent said they have continued to meet in person. In South Carolina, about 2 in 5 churches were using Zoom or another social media app to meet online, while about 11 percent said some groups have continued to meet in person, practicing social distancing. Meanwhile, nationwide 4 in 10 pastors said their Sunday school or small groups have not met in any capacity during the coronavirus disruption, but in South Carolina, more than half have not met.

As some members lost income, many churches have begun struggling, according to the LifeWay survey. That survey found that half of pastors (52 percent) said giving has decreased compared to earlier this year. Nationally, only 1 in 5 pastors (18 percent) said giving had continued at similar levels, while 2 percent think it has increased.

The Courier’s survey, however, found a much more encouraging report. Nearly three-fourths of South Carolina pastors said their offerings were about the same or higher than an average Sunday’s offerings prior to the pandemic. More than 11 percent of those said they have seen a significant increase.

This may be due in part to a church’s willingness to adopt an online giving option. While churchgoers may still mail in offerings, the crisis has driven some churches to explore online giving capabilities where they may have been reluctant to do so before. 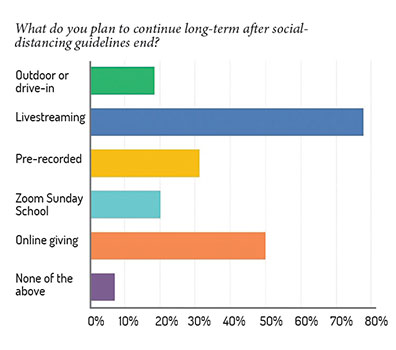 More than a quarter of South Carolina Baptist churches surveyed have started providing an online giving option, while 35 percent of pastors said their churches already were doing so. Combined, more than 3 in 5 churches are offering members an option to give online. About 18 percent started collecting offerings at drive-in services.

One pastor remarked that while his church has seen an increase in the number of people who are accessing services, whether drive in, livestreams or by conference call, giving has been down some, but not significantly, as the church ramped up other options.

One pastor commented that he plans to offer hybrid services once his church starts meeting in its sanctuary again, but it will continue providing a drive-in option while preaching occurs inside at least for a while.

“Social distancing is not normal. Humans are relational by nature, and churches are a community of Christ followers,” McConnell concluded. “The lack of presence pains many pastors and their congregations, but they are utilizing technology like never before to stay connected until they can meet again.”