For Pastor Hank Williams and the congregation of First Baptist Church, Boiling Springs, the strategy for a safe regathering was captured in a slogan for social distancing: “From the street to the seat.”

The church began regathering on May 17 with four services: two at 9:30 and two at 11:00, in two different locations on campus. Like most churches we contacted, cleaning and disinfecting surfaces between services, sanitation stations, masks, bathroom monitoring to insure proper distancing and numbers, defined markings for social distancing throughout the buildings, limiting the number of people gathered for worship, and having drop-offs for collecting the offerings rather than passing the plates were some of the most-used strategies.

Williams said, “We have tried to be sensitive to the guidelines and prayed about how to open. We are giving those who are older (60 and up) or those who have a health condition that makes them vulnerable permission to stay at home. We can continue to serve them as they connect with us through our online services. We are holding our seating capacity to 25 to 30 percent of our maximum seating limit and have our student building available for overflow seating if needed.” The goal for Boiling Springs First was a worship service under an hour, with the message taking around 20 to 22 minutes.

Nearly all the churches began opening with no childcare and had plans for a three- or four-stage phase-in for returning to normal or “new normal” conditions. For the most part, Sunday school classes and small groups continued to meet online, particularly in the first two or three phases of the regathering process. First Baptist, Spartanburg, regathered outside May 17 at Barnet Park in Spartanburg, while First Baptist, North Spartanburg, returned to its sanctuary. Both churches practiced social distancing and provided attendees with masks and sanitizing stations. 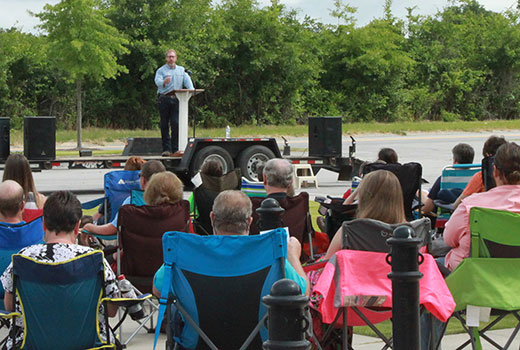 Malvern Hill Baptist Church in Camden holds “services on the lawn” but hopes to regather inside in late June or July.

Craig Thompson, pastor of Malvern Hill Baptist Church in Camden, stated, “During the week of March 8, Camden proved to be a major outbreak center for COVID-19 in South Carolina. On March 14, our city government requested that churches cancel corporate worship, and we have not worshipped in our sanctuary since then. We improved our online delivery, began a parking lot worship service, and discovered new ways of doing ministry.”

The church does not plan to assemble in the sanctuary before late June or July — possibly even later. “We plan to worship outside for as long as we can. We could lose a significant number of our attendees if we moved inside too soon — as many as 30 to 50 percent, especially our older members and those most vulnerable with chronic health issues,” he added.

On May 17, they began having services where families sat together on the lawn. The plan for “inside” worship includes limiting the capacity to somewhere between 20 and 50 percent. Thompson noted, “About once a week, one of our kids informs us that they don’t like this. I let them know that I don’t like it either, but we have to be patient,” he said. “I can hardly wait to get back to normal, but I don’t want to rush to ‘normal’ and create more harm.”

First Mount Moriah Baptist Church in Greenwood began holding outside services on May 17 with a plan to move inside in June. Pastor Bryant Sims said, “We have seen people make professions of faith and others request church membership. Our offerings have held steady, and we have cut expenses in order to help some other churches on the other side of this pandemic.

LifeWay Research reported that in their survey of Protestant pastors, 40 percent said their offerings decreased, 42 percent said giving continued at similar levels, 9 percent indicated offerings increased, and 9 percent were not sure. During the shelter-at-home phase, 16 percent added online giving and 48 percent continued using it, while 35 percent reported no set-up for online giving. Seventy-seven percent of the pastors said that new people who had not attended their church in the past connected with the church online.

All the churches The Courier observed either continued or began online services. Many streamed their services live, while others offered prerecorded services. The pastors we spoke with indicated their churches were conscientious about following the CDC guidelines and approached regathering with a sense of caution rather than urgency.

The overwhelming majority of churches in our sampling either had the amount of their offerings stay the same or increase. Some churches have made plans for the fall in case there is an uptick in the number of COVID-19 cases. One thing was certain among our SCBC churches: Worshiping and serving God will continue, despite any obstacles that may necessitate changes in how they do it.