Rolland Slade’s longtime friend John Hughes describes him as the pastor of all of El Cajon, a San Diego suburb of more than 100,000 people.

So much so, said Hughes, that when an ecumenical group of pastors sought to comfort the community after El Cajon police shot and killed an unarmed African immigrant in 2016, pastors called on Slade.

“San Diego comes unglued. There are marches. Everybody’s focused on El Cajon,” Hughes said. “Those pastors got Rolland Slade and put him in front of the camera and said, ‘Please be our spokesperson.’ They didn’t go to the big guys, and they didn’t go to him because he was Black. They went to him because he was Rolland. He’s just the best. He’s just absolutely the best.”

Slade, who was elected June 16 as the first African American chair of the Southern Baptist Convention Executive Committee, pastors Meridian Baptist Church, whose pre-COVID-19 Sunday worship attendance was about 70. Slade’s footprint extends far beyond the walls of the church, said Hughes, who has collaborated with Slade on several faith-based projects during their 25-year friendship. 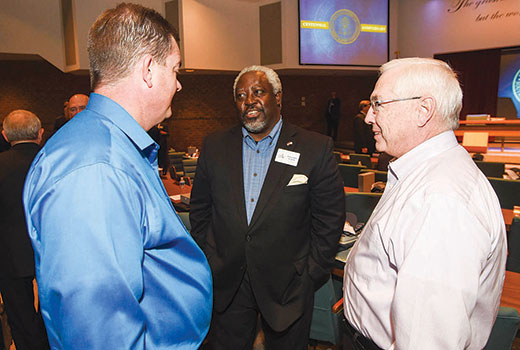 “He was the pastor of that community, so much that the mayor would send the chief of police over, the head of the parks (and recreation) over and say, ‘Go talk to Rolland. We’re trying to do something in the community and we’re not sure how it’s going to work,’” said Hughes, a minister and co-founder of Simon Cross Consulting.

A news clip of about 35 pastors’ responses to the community upheaval captures Slade’s prayer:

“We, Lord — the region, the community, the neighborhood and the family of (African immigrant) Alfred Olango — have been dramatically changed, but, Lord, we’ve been called for such a time as this. Our nation has seen division and separation long enough. Let us identify as a church, the children of God, and use this moment in time to drive us forward to do and to be better. We seek truth, Lord. We seek transparency. We seek transformation not only for the city, but for the region.”

The most important thing in his ministry, Slade told Baptist Press days after his election to chair the EC, is loving others as Christ loves him.

It is a love that surprised Slade as a teenager, a love that motivated him to share Christ in the marketplace, a love that allowed him to pastor his father and lead him in the sinner’s prayer, a love that led him to missions, and a love that placed him in 2004 as senior pastor of Meridian Baptist Church, where at least 91 percent of the members were of a different hue.

Slade has worked extensively in community ministry since his ordination to gospel ministry at Bayview Baptist Church in San Diego in 1991, serving at Highland Park Baptist Church, planting Meadowbrook Fellowship in a housing complex, and working as a California missionary with the Home Mission Board (now the North American Mission Board). He has collaborated with Hughes in faith-based ministry, is active in the greater El Cajon community and has been awarded for his work.

As a child growing up in San Diego, Slade thought his family was Catholic. He was an altar boy, attending mass most days of the week. He attended Catholic parochial grade schools and a Catholic university. But when his family moved close to public Helix High School, Slade negotiated with his father to attend Helix. It saved Slade a commute, it saved his family a tuition bill, and it put Slade in contact with a Young Life ministry that taught him about the love of Jesus.

Slade wondered why the Young Life ministry embraced him and his friends when it was likely obvious they were only attending the meetings because “that’s where all the pretty girls went.” Slade asked the leader, Dalton, why the group was so kind.

“I’ll never forget. Dalton said to me, ‘Jesus loves us, and so we love you guys,’” Slade recalled. “Nah, nah, nah,” Slade said he responded. “Jesus is the punishing God, and He’s the Son of God Who punishes (me for) all the stuff I do wrong. And I’d been riding my bike to school, doing confessions every week, … my last confession was a week ago. … It just blew me away. We were there for all the wrong reasons, and they just loved us.”

Slade was astonished to learn he could go directly to God. A few years later at the University of San Diego, Slade took to the religion courses “like a duck takes to water, just reading and asking questions.” He decided to transfer to another university for his senior year.

After college, he joined Bayview Baptist Church in San Diego, a National Baptist Convention congregation, where he was baptized. He married Adrienne C. Jewell, and the two are parents of Rolland “Jay,” Ryan and Alexandra.

NAMB appointed Slade and his wife as missionaries to the California Southern Baptist Convention, with Slade directing community ministries for the San Diego Baptist Association. It was in 1995, when Slade served as NAMB’s national missionary for Welfare to Work Evangelism Ministries, that he and Hughes became friends. Slade was tasked with training and empowering churches, associations and state conventions to mentor men who had struggled in life.

From 2002-2005, Hughes and Slade led the Faith-based Leadership Training Institute of San Diego State University with two other professors, training over 100 pastors from 18 different denominations to work in the community.

Mike Carlisle, director of missions for the San Diego Baptist Association, said Slade is an active member of the association. Slade has served the association as finance committee chairman and as moderator, Carlisle said, and has prominently served in various community leadership roles.

“He has been a steady hand and a wise leader in every respect,” Carlisle said. “He has been a gentle man who appreciates diversity, and I just couldn’t say enough good things about him in terms of his leadership role both here in our association, in our state convention and now nationally.

“His attitude, his spirit is nothing but positive and helpful,” Carlisle said. “Everyone here loves Rolland.”

Jeff Lettow, pastor of First Baptist Church of Lemon Grove, has known Slade more than 30 years and calls him a “man above reproach.”

“He has that kind of a personality who listens well; he’s very encouraging,” Lettow said. “I’ve never heard him say bad things about anyone. He’s a man of integrity. He’s very judicious when he speaks or listens. He’s a man under control in a lot of ways.”

“As we have prayed for him,” Lettow said, “we really believe he’s the man for this hour, a man for this season. … He’s a man I would want on my side, going into battle, and he’s been there for that. He’s a gentle spirit. Jesus talks about how He handles us in a gentle manner, and I think that’s an apt expression of Rolland.”