Closed sanctuaries, social distancing, mask requirements, seating limits and congregational singing restrictions could put a huge damper on normal church life. Yet, in spite of having all the pandemic precautions in place, some South Carolina churches are growing.

Utica Baptist in Seneca, for instance, has seen 15 baptisms in a span of three weeks that were members of 11 different families.

“We re-started on-campus (inside) worship on May 17 after eight weeks of online-only worship,” said Pastor Ryan Goodroe, noting that “a powerful movement of God” occurred the week of June 14.

“We had one older child that made a profession of faith in early June and was scheduled to be baptized on June 14. During our Wednesday night prayer meeting (on Zoom) on June 10, one of our members thanked God for her profession of faith and upcoming baptism, and also prayed for those that had been baptized throughout the years at Utica who are not walking with God as they should be,” Goodroe recalled.

As he was praying, Goodroe sensed an “incredibly strong leading” from the Holy Spirit that the coming Sunday should include a very clear call for salvations and baptisms. He shared that impulse with those on the Zoom call, and he emailed the church about it the next day. Over the next three days, six more people responded to the call.

Of those six, two were young children making first-time decisions for Christ, two were youth who had been saved years ago at Vacation Bible School but had never made  public professions of faith, and two were an older couple who had not joined because they had been baptized by another mode. The mom of one of the young girls and the dad of the two youth also requested to be re-baptized with their children.

“So, we went from one scheduled baptism to nine heading into that Sunday,” Goodroe recounted. Before the service, another young child approached Goodroe about salvation and was also baptized during the service. Then, during the two services that day, two more youth were saved, and they were baptized the following Sunday. Another woman who had been attending for five years but had never been baptized responded and immediately went into the baptistry. This report, he noted, does not include another young child who was baptized in July and a woman who was re-baptized as part of a rededication that month.

“It was an incredible three weeks and a great reminder of the power of God!” Goodroe exclaimed, adding that all of the baptisms were performed inside in the “normal” manner, trying to be as careful as possible.

“We have been meeting for on-campus worship for 12 weeks now (Aug. 6), without a single case of COVID that could have originated from a service,” Goodroe reported. The COVID outbreak, he said, made Utica put its services online, which has led to a greater footprint of its ministry in the community.

First Baptist Church, Barnwell, is another example. The congregation has seen people join almost every Sunday for six weeks as it returns to worshipping in the sanctuary.

“We have baptized almost a dozen since COVID-19 hit and have six more to do. Amen, God is good!” Pastor Bart Kelley told The Courier in early August.

“To be honest, I feel that the desire in the Christian’s heart is the draw,” Kelley said. “Now understand, we are not at pre-COVID-19 numbers, but we do have new people coming, new salvations, and baptisms are happening.”

The salvations and new additions stem from the church’s recent outdoor services in a nearby park and its online worship, Kelley believes. As for holding baptisms, “we have done them indoors and outdoors, in horse troughs, and in my pool,” Kelley said. “Our motto is, ‘Whatever It Takes!’

“We never stopped doing what we were doing, we just kind of switched gears,” Kelley continued. “Yes, the park services helped; also pushing services over the radio with local transponders (with a three-mile range) helped as well.”

Like other churches, the members of Barnwell First are offering every safety precaution they can think of, from disinfectant foggers and air cleaners to hand sanitizers, social distancing, and making masks available. Doors are opened and closed for attenders, tithes are dropped in offering plates as people enter or exit, and the list goes on.

“Our goal is to make everyone feel as safe and comfortable as possible so the attention is on the service and not the virus,” he said. “I know we’re doing nothing different than any other church,” he added. “What I do know is that we promote everything we are doing for their safety, so everyone knows before coming that we’ve left no stone unturned.” 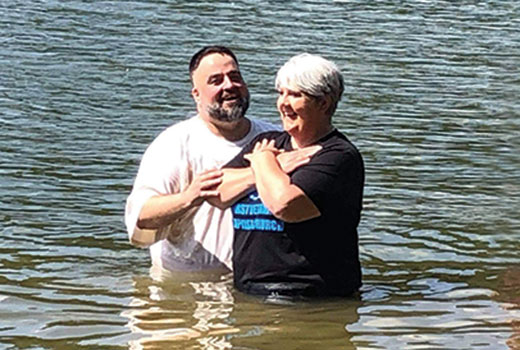 Several seating options are available for worship services — in the sanctuary, balcony and chapel. In August, the Merge (youth center) was to have been added. All the while, services continue to be transmitted over the radio, allowing some to listen in their cars.

The church also conducted Vacation Bible School in a new way that involved entire families. They are continuing to reach children and youth through creative ministry ideas, such as tie-dye parties, dodge ball tournaments, and sandwiches and Scripture. All are being done on a limited basis, only allowing so many participants, but bringing friends is encouraged.

“The parents love it, the children and youth love it, and they are coming,” Kelley said. “Other churches are canceling everything around us, as well as other businesses and attractions. We decided to offer safe, fun alternatives and, man, has it been working!”

The church is also staying in contact with members through email, phone trees, text messaging, Facebook and Instagram, handwritten letters, front porch and front yard visits, and calling shut-ins often to see if there is any need. “These things keep fellowship strong because they still feel personally connected to the Lord’s house,” Kelley said.

First Bethany Baptist Church, located about six miles outside of McCormick, is another one seeing recent growth. Two sisters were baptized recently in Lake Thurmond, and five more people were scheduled to be baptized in August.

“All are a result of decisions made during our online Bible studies during the ‘shutdown,’” said Pastor John Alexander. “We started studying through the book of John, and then we progressed to Joshua.”

Many of them responded after a time of prayer by typing their commitment into a comment field on the church’s Facebook Live feed. One person sent a text message to Alexander later. He has followed up with each individually online and in person.

The baptisms were held at a church member’s property on Lake Thurmond, just a few miles from the church. “We did not have service at the church that morning. Instead, we held it at that lake location — socially distanced, of course,” Alexander said. “There was a large crowd scattered under the pine trees right next to the water’s edge — one of the most beautiful settings to hold a baptism service.” 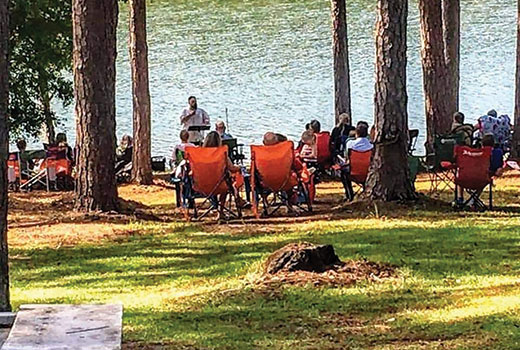 Members of First Bethany gather along the banks of Lake Thurmond for a baptism service.

First Bethany started meeting again in its sanctuary on July 5 on Sunday mornings. The sanctuary has every other pew roped off, and masks, gloves and hand sanitizer are provided. Sunday school, children’s activities and Wednesday night programs were still suspended as of Aug. 3.

For the two weeks prior to Easter, First Bethany did not meet in person, but relied solely on online streaming. On Easter Sunday, the church began a drive-in service in front of the church that was supplemented with nightly, online Bible studies during the week.

As the church drew closer and closer to its regathering date, the number of nightly Bible studies were reduced, and now are only offered on Sunday nights and Wednesday nights. Sunday morning worship is still being streamed online.

Randy Mellichamp, pastor of Camp Creek Baptist Church in Lancaster, was among several other pastors reporting growth who responded to an online query by The Courier.

“The Lord has given us 10 to baptize, five additions and two more that we will baptize in two weeks,” Mellichamp reported on Aug. 3. His church is staying connected with people through Facebook posts, phone calls, and word of mouth by its members. “We had a huge buy-in to a drive-in service from our senior adults,” he said. “We are planning to bring our prayer meeting back with a drive-in service, so those who are not comfortable with in-person meetings can still connect.”