Josh and Shannon Jennings, along with their three children, left the familiar confines of South Carolina to plant a church in what Josh calls “one of the major New Age strongholds in the world.” Today, Aletheia Church in Sedona, Ariz., has grown to the point of being a self-sustaining congregation by 2021, intent on planting other churches.

Earlier this year, Crestview Church, which had rented space to Aletheia, signed over its property and financial assets to Aletheia and was adopted into the Aletheia church family.

After launching the church start on Jan. 15, 2015, and meeting in a government building for the first months of its existence, Aletheia faced a challenge: where to gather. 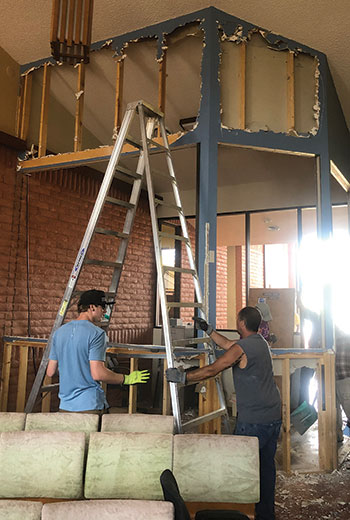 During the shutdown due to the pandemic, Aletheia Church took the opportunity to do some remodeling, including relocating the sound booth to provide more seating. (Photo by Todd Frame)

“The building we were meeting in was given to a performing arts group, and we had to be out by August. Meeting in the local high school would not work for us because we could not meet on 11 Sundays,” Jennings said. “I was feeling dejected as I drove through town, when I came to the intersection where Crestview was located. It was formerly the First Baptist Church of Sedona. I had gotten acquainted with the pastor previously and decided to call him. They met at 11 a.m. on Sundays, and we met at 9 a.m. We talked about Aletheia renting space from them for our Sunday morning service.”

Through several meetings, the two churches reached an agreement, and Aletheia began meeting in Crestview’s facilities. In December 2019, Crestview pastor Ken Nickell surprisingly announced to the church his retirement at age 62. He had planned to retire at 70 but stated that he sensed the Lord leading him to retire now and help homeschool his grandchildren in nearby Cottonwood where he and his wife lived.

“The church of about 20 people then had to decide if they wanted to call another pastor or do something else,” Jennings stated. The idea of Aletheia adopting Crestview led to discussions, which resulted in Crestview voting unanimously to give Aletheia its property and financial assets.

“COVID came in March, and everything was shut down. We began to do remodeling in the sanctuary. I made sure the people of Crestview were OK with everything we proposed. They were constantly positive and saw Aletheia as their legacy,” Jennings said.

On June 27 of this year, Nickell preached his farewell message. Jennings added that “most of the members of Crestview have joined Aletheia (about 90 percent).” The name Crestview was inspired by the location of the church — overlooking a picturesque ridge of desert mountains. 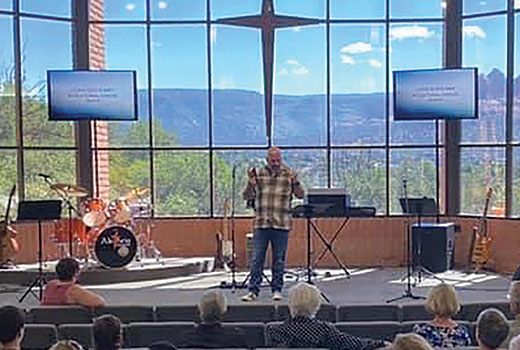 After 11 weeks of worshipping only online, members of Aletheia Church gather and sit in family groups for worship in a newly remodeled auditorium on Sunday, June 7. (Photo by Todd Frame)

Jennings added, “I had said many times that we would never build a building. It was too expensive, and there was too much red tape involved. People would ask me when we were going to get our own place. I answered that we did not need a building; we were paying $150 a week (to Crestview) and had no utility or maintenance costs. But the Lord just really worked this out. Nobody could have dreamed what would happen. Crestview has loved us from August 2015 until June 2020. We never had a single complaint from them. Sharing the property with them became an unimaginable testimony.”

“One day I got a call from Josh telling me that he was preparing to move to Sedona to plant a church,” Stone said. “My first response was, ‘Are you crazy?’ But I soon asked him to come to Pickens and share the vision for this church plant. Our church made a five-year commitment to provide financial support in 2014. We have sent teams each summer to Sedona. The Lord has greatly blessed their faithfulness, and Aletheia has become an established, biblically sound, gospel-centered church.”

Aletheia is planning to duplicate its experience by planting other churches. “We are not a major city, so we are not on the North American Mission Board’s radar, but there are many towns just like us that need a gospel-centered church,” Jennings said. “We have been in talks with a Hispanic church planter and anticipate that church launching in 2021 and sharing our building.”

Jennings’ wife, Shannon, helps the Arizona Baptist Convention with church planting and is serving as the chairperson for the upcoming Arise Women’s Conference meeting in Sedona and sponsored by the state convention.

Josh and Shannon have three teenagers: Caleb (18), who will be attending Anderson University next year; Eli (16); and Anna Grace (14). Pickens resident Griffin Barnes has served as Aletheia’s summer student minister. His dad, Michael, served on the staff at McCall Royal Ambassador Camp, as did Jennings.