A little more than a week after slamming the Louisiana coast on Aug. 27, it was obvious Hurricane Laura’s 140 mph Category 4 winds considered nothing sacred, including houses of worship.

Media reports told of hundreds of thousands of Louisianans who were left without power and water, perhaps for weeks. In many communities, cars have lined up to receive bottled water and ice from the National Guard and various humanitarian groups, including Southern Baptist Disaster Relief teams, which have also provided tree and debris-clearing assistance to homeowners.

Perhaps as devastating as the destruction of homes is the damage to houses of worship. According to John Hebert, director of missions and ministries for Louisiana Baptists, approximately 107 Louisiana Baptist churches sustained damage from minor to catastrophic — and some may not open their doors again.

Early reports reflected 38 Baptist churches with Level 3 damage, meaning that they sustained the most damage, Hebert said. “This includes roofs that are collapsed or missing, large holes in the roofs, and extensive water damage resulting from those roof issues,” he explained. 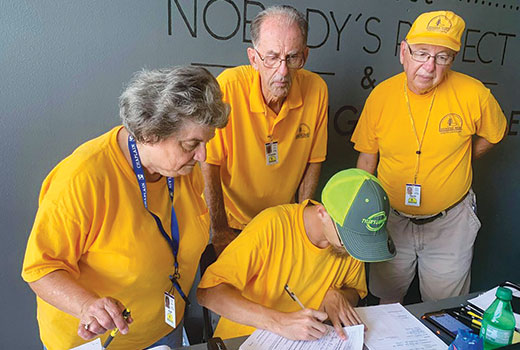 Setting up a command post in Leesville, La., about 70 miles north of Lake Charles, six South Carolina chainsaw crews worked the first two weeks in September clearing trees and debris off homes and from yards. Two teams of chaplains and assessors, incident management teams and cooks were also deployed.

One chainsaw volunteer reported to the South Carolina DR office that the people there are so desperate for help after Hurricane Laura that “many of them cry when we show up.”

Chris Hutto, of Shandon Baptists’ chainsaw unit, said, “One homeowner we helped was an active Christian. A neighbor stopped by to thank us as we worked in the yard, saying, ‘He’s the one who’s always helping other people, so it’s nice to see him getting help.’”

“There were several obvious ‘God moments,’ where God put us in the right place at the right time to have conversations that didn’t have anything to do with trees or the hurricane, but had to do with life situations,” added Scott Kierstead, who served with the Edgefield Association chainsaw unit.

One example, Kierstead shared, occurred when he knocked on the door of a home near where the team was working. The man who answered was a Presbyterian pastor whose wife has stage 4 cancer. A pastor himself, Kierstead could relate to the man’s situation since his wife passed away 10 months ago from cancer. Kierstead felt strongly that God had led him to that door.

Steve Horn, executive director for Louisiana Baptists, visited many of the affected areas to encourage local pastors and offer assistance.

“Our calls and visits are showing 43 Louisiana Baptist pastors sustained damage to their homes in addition to their churches,” Horn said. “Pastors are busy helping their members and assisting their communities while attempting to address their own damage as well.

“We are grateful for all of our state convention, national and local church partners that are assisting in the recovery effort,” Horn added. “While Laura has faded from the headlines, she remains front and center for those of us in Louisiana, and will for months to come.”