The turkey, dressing and pumpkin pie will likely taste a little sweeter to Brent and Courtney Glover this Thanksgiving.

In late March, Brent, an otherwise healthy 34-year-old with an active lifestyle, began having severe headaches and felt really fatigued. He also noticed some red spots on his arms and legs, as well as a couple of bruises.

The headaches were accompanied by dizzy spells, and one day he found himself struggling to stand upright. His wife, Courtney, urged him to see a doctor.

“As any man, I pushed it off as long as I could,” said Brent, a former U.S. Marine who works for SEW-Eurodrive. But on April 2, he relented and went to see a family doctor, who ran some blood tests. No one expected what happened next. 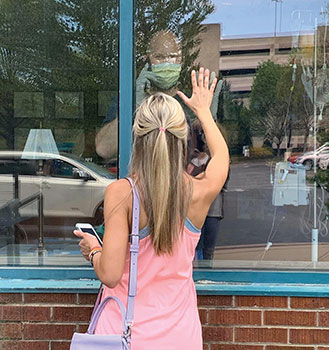 Brent Glover said, “It’s hard being apart from your family, and not being able to physically touch them” when someone is ill.

In the middle of the night, around 3 a.m., a doctor on call tried to call Brent to tell him to get to the emergency room. “My blood numbers were that bad,” Brent said.

Brent’s phone ringer was off that night. Unable to reach him, the doctor called Brent’s mom, who was listed as an emergency contact. His mom and dad rushed over to Brent’s house at 5 a.m. and told him to go to the hospital immediately.

An oncologist, Dr. Steve Corso, looked at his blood under a microscope, and a bone marrow biopsy was performed. Brent was diagnosed on April 3 with acute promyelocytic leukemia, a very aggressive form of cancer.

The doctor’s words “just sounded muffled” as he broke the bad news to Courtney. “It sounded like somebody was just talking, and I wasn’t listening to anything he was saying,” she said.

It wasn’t until she got out into the parking lot and saw her dad and mom that she really collapsed with her emotions. “I felt like I finally had the chance to do it, because I didn’t have to be strong in front of Brent and my kids,” Courtney said. 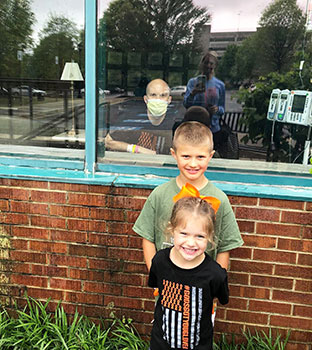 Brent and Courtney’s son Eli, 8, and daughter Charlotte, 4, stand at a hospital window since they weren’t allowed inside due to COVID-19.

Due to COVID-19 restrictions, Brent’s isolation throughout a nearly-four-week hospital stay at Spartanburg Regional was especially hard for him — and for Courtney and their two young children, Eli and Charlotte, as well.

“When I was first diagnosed sitting in the ER — when they told me that I had leukemia — I was in extreme shock,” Brent said. “It didn’t really click that I wouldn’t get to be with my family until later on that day, when they had actually put me in my own hospital room. Then I found out that they wouldn’t be able to visit me, and I wouldn’t be able to go out and visit with them,” he said.

“It was very hard to grasp that I was going to have to go — at the time, we thought maybe five to six weeks — without seeing my family face-to-face,” he said.

Courtney didn’t know when or if their kids would see their dad again. “They really didn’t know what his chances of survival would be because he was so sick, and we didn’t really understand how sick he was until we got to the hospital,” she said.

Brent was able to see his wife and kids through a glass window, though.

“I would go out to the lobby and they would come up to the window, and we would call each other and talk to each other over the phone when we were looking through the glass window together,” he explained. “It was very hard, but it was something that I was praying about, for the Lord to keep me strong, to keep my family strong, to keep my kids strong during this time.

“It was definitely harder at times than others, but through prayer and God’s grace, we got through it,” Brent said.

The month that Brent was in the hospital was “just terrible,” Courtney recalled. “It was just not being able for the kids to see Daddy, and us really not feeling like a couple because we couldn’t see or really touch each other for a whole month,” she said. 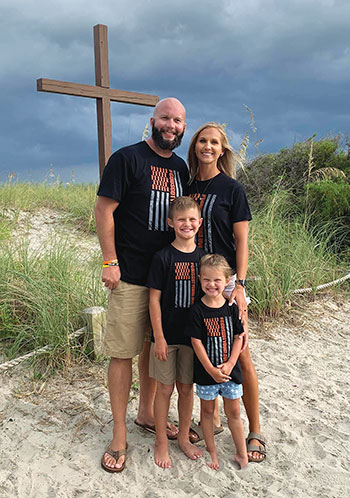 The Glovers took a family picture on a trip to the beach for Labor Day weekend, right before he started a second round of treatment.

During that time, she read a devotion about Moses going through the Red Sea. “That book was really what got me through the month of April, just remembering God’s promises and how He delivered His people,” she said. “I held on to that promise, knowing that if God could get His people through such a time where it was impossible to cross the Red Sea, then He could bring my husband home.”

Brent finally got to come home at the end of April. Four weeks later, he started a second round of outpatient chemotherapy, which was five days a week for five weeks. He completed his final round of chemotherapy in October.

“At this point, with Brent being home and being able to do treatment as an outpatient, we feel like we’re a little bit more back to normalcy, and that’s allowed us to feel more like we’re a family again,” Courtney said.

A former school teacher, Courtney recently has joined the staff of View Church in Boiling Springs. “I didn’t think I could take it (the children’s ministry position),” she said. “I thought I had to stay in my safe plan of being a teacher, working for the state, not giving up that retirement.”

Brent’s cancer currently is in remission. “They’ve done two different blood tests on me to make sure that there’s still no leukemia cells in my blood, and both of those have come back negative,” he rejoiced.

Now that he’s back home, Courtney feels the four of them have really grown in their faith. Their son, Eli, was baptized this summer by her dad, Danny Garrett, pastor of Antioch Baptist Church in Enoree.

On the way to school one morning, she and Eli were listening to a song. “I know the Bible verse that goes with the song,“ Eli announced. “It’s Exodus 14:14,” he said. “The Lord will fight for you, Mommy.”

“And just through Brent having cancer, I know that my kids know that God is faithful, and that He will fight for us, even when it doesn’t make sense,” Courtney said. “Even Charlotte, who’s 4 years old, understands that we pray for Daddy. We’re praying that this last round will be the very last round. And we’re just having our faith in that. So we’re very, very hopeful.”

Yet, in spite of a serious battle with leukemia and enduring COVID restrictions while in the hospital, Brent says, “Yes, sir. It’s been a true blessing.”

“The Lord has blessed me with a tremendous testimony of His faithfulness,” he added. “He tells us that He will never forsake us, and I’ve never felt it more than now.

Hearing a potentially terminal diagnosis has made him “more thankful for the things that the Lord has blessed you with up to this point … my wife, my kids, my family, my friends, and, most importantly, my relationship with Jesus,” he said.

“Thankfulness is almost an understatement, because I’ve just been so fortunate and so blessed,” he added. “Even though I went through this, it’s really made me appreciate and be more thankful for the little things in life that you don’t necessarily think about that much any other time.”

Courtney is especially thankful that her family is together again and for her faith, which anchored her through it all. “There’s a lot I could say I’m thankful for, but if you want just one thing, I’m thankful for the godly parents who raised me and instilled the foundation of faith that I have, because as soon as everything happened and everything went down, I knew exactly who to turn to, and that was Jesus.”

Brent also has a word for somebody going through a difficult patch in life. “Whether it’s leukemia, whether it’s a different type of cancer, whether it’s an addiction, no matter the circumstance, if you’re going through a struggle, don’t lose hope,” he urged. “Stay in prayer, and stay close to Jesus and in your walk with Him,” he added. “Yes, Jesus has put doctors in our path to help take care of us, but He’s the ultimate healer.”