Some homeless women may have a place of their own soon as First Baptist Church of Spartanburg begins constructing a small village of tiny houses.

After seeing some similar villages on television and elsewhere, Steve Wise, missions minister at First Baptist, posed the idea: “Building small, transitional houses could be something our church could do to help one of the various populations that its community ministry serves.

“Our church has been serving the homeless on Sunday mornings through a ministry we call ‘Refuge,’ which offers showers, breakfast and Bible study,” Wise said. “So they’ve always been on our heart.” 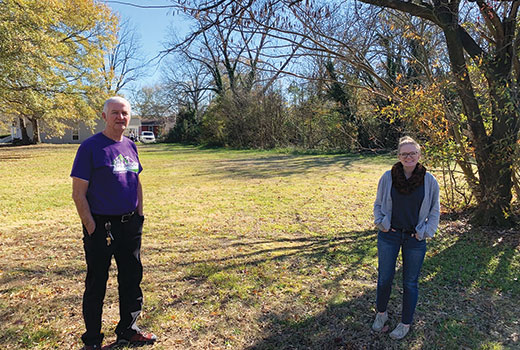 Steve Wise, missions minister, and Madison Biggerstaff point out the land near “The Bridge” ministry center where 20 tiny houses are planned.

The church’s ministry center, The Bridge at Green Street, is located in one of the spotlight neighborhoods where a partnership is forming between government, for-profit, nonprofit, and faith-based organizations in an effort to try to transform a whole neighborhood, Wise said. The North Side Development Group approached Spartanburg First about expanding its ministry among the homeless.

“The percentage of the population that’s female and homeless is growing, while most of the resources seem to be targeted at men,” Wise noted. “Let’s see if we can do something about that,” he urged, emphasizing that “God cares about everyone.”

For the past 18 months, The Bridge has been pulling its resources together, getting design plans, and lining up architects, engineers, contractors, and donors. Madison Biggerstaff, a member at First Baptist, Spartanburg, is the project’s director. A VISTA (Volunteer in Service to America), she will work on-site through the United Way of Piedmont, coordinating other community resources. 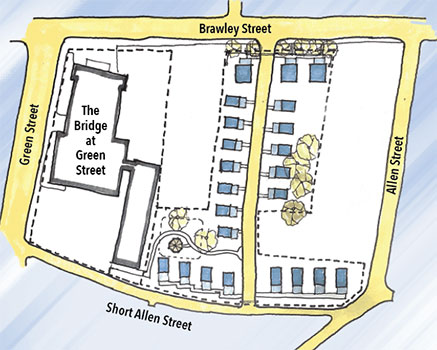 Artist’s rendering of “BridgeWay Village” depicting the location where each of the tiny houses will be constructed, pending approval by city planners.

A village of about 20 tiny houses is planned on about an acre of property adjacent to The Bridge. The single-bedroom houses will range in size from about 190 to 230 square feet. At least three more will have two bedrooms. The expected cost for each unit will be approximately $30,000.

“But the plan,” Wise said, “is that these houses would be temporary shelter, not permanent housing. The ladies would be in our tiny houses and in a ministry program that will help them repair some of the broken parts of their lives that put them in their particular situation.”

Of course, the church’s ministry will also offer healing for their brokenness with God, Wise said. “We really believe that’s the number one thing that’s going to be their transformational spark,” he added. “So we’ll have a pretty extensive mentoring program that has Bible study and discipleship elements.

“There’s a need for job training to provide the opportunity to increase income-earning potential,” he added, noting that a 20,000-square-foot community building — where residents can learn job skills, build relationships with others, share meals, and attend Bible studies — is also in the works.

The goal is that one day the women will be able to move into larger, more permanent housing. “Hopefully, the home run would be for them to buy their first home, or they would be in a rental situation. We want to help them get their lives back in order, so they can be productive, contributing citizens.”

Construction is projected to begin this summer, pending approval by city zoning and planning officials. “We’ll have the licensed professionals for plumbing and wiring and those things that are necessary to meet city codes,” Wise said. “But we’ll need lots of volunteers on-site to do the construction work. It’s really a ‘community build’ kind of effort.”

Spartanburg First also would like to see other churches be involved. One fairly easy way, he said, is for churches to send volunteers to help build a house or several houses together.

“And, certainly, churches can pray,” he added. “The thing that we most want to see happen is for the Lord to be glorified — and for our city, our county, and our state to all take notice of what happened and to know that it happened because of Jesus.”