For some, growing older can be a foreboding experience, according to Tom Turner, president of South Carolina Baptist Ministries of Aging. But he believes, “The aging process should be embraced and celebrated.”

Referring to Psalm 92:14, the righteous “will still yield fruit in old age,” he said, “Regardless of age, life is to be lived and the Lord, served.”

Retired pastor Henry Rogers moved to Martha Franks 10 years ago, still grieving over his wife’s passing two years earlier. He needed help financially to live at Martha Franks, and he was given a scholarship made possible by the annual Mother’s Day offering in churches of the South Carolina Baptist Convention. He was able to work through his grief as he began to serve God in several different roles.

“[Rogers] serves as the chaplain when needed, volunteers with the Billy Graham Call Center, leads a communion service in the Assisted Living wing, and teaches a Sunday school class at his church,” Turner said. “At Martha Franks, he has thrived. Although he still had his nuclear family, Martha Franks became his family, also.” 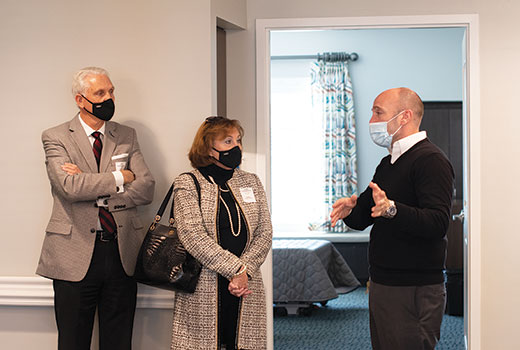 The SCBMA has two campuses. Percy Bethea donated 146 acres of land in Darlington County in 1954 to be developed as a retirement home for retired missionaries and pastors. Bethea Retirement Community opened in 1960 with two residents. Martha Franks, a retired missionary to China, donated an antebellum estate with 50 acres and a small lake as a retirement center in 1985.

Today, SCBMA, a ministry partner of the South Carolina Baptist Convention, has more than 300 residents in its two retirement communities. Both offer various skill levels to fit the needs of their residents, providing social, spiritual and culinary opportunities for individuals and couples.

“Staying active and serving others is one of the keys to enjoying a long life,” Turner said. “Just recently, one of our precious 90-something ladies shared that she is certain she is still active and alert because she made the decision to come to one of our communities years ago!”

A growing demographic of the population is the 55-and-older group. “As the Baby Boomer generation ages and downsizes, we expect to see more and more 55-and-older communities being developed. This age group will prefer to continue their maintenance-free lifestyle. Some will want a smaller home, others might prefer apartment living,” he said. “But all will not want the hassle of maintaining their yards or homes.”

It is estimated that one baby boomer turns 65 every 10 seconds, approximately 100,000 a year. In addition, the number of people over 65 with Alzheimer’s has increased by 30 percent in the last 10 years. As many as 70 percent of 65-year-olds will need some level of long-term care eventually.

In addition to Bethea and Martha Franks, SCBMA continues to “explore options for expanding into the Midlands so that we will be able to serve more seniors and their families,” Turner noted.

He pointed out that 1.1 million people 60 and over live in South Carolina, but that number is expected to grow to 1.5 million by 2030. “With 70 percent of today’s senior adults now being online, many will continue to utilize technology advancements to promote successful aging and connect with others,” he added.

Turner will celebrate 12 years as president of SCBMA this April. He and his wife, Mary Anise — the daughter of missionary parents — have two children, Kate Elisee, 17, and Paul, 14.