Seven-year-old Jensen Graves was among a small crowd that gathered as First Baptist Church of Cowpens was ablaze on the Saturday after Christmas. His mother had brought him to see the flames shooting through its roof. Jensen got out of the car and began to cry.

“The fire was devastating!” Pastor Kermit Morris said. “It took everything. We have nothing left except the family life center, which is a metal building. Everything was destroyed.”

Jensen, whose father is pastor of nearby Philadelphia Baptist Church, wanted to help Cowpens First. He decided to organize a yard sale, and he raised more than $5,500.

On Sunday, Jan. 10, Morris, who has been transitional pastor at Cowpens First since September, interviewed Jensen, and a video of Jensen and his yard sale was shown to church members. After the interview, Morris thanked Jensen and asked if he could pray for him. “When I got through praying, this 7-year-old boy said, ‘Can I pray for the church?’” Morris recalled. As Jensen prayed, there wasn’t a dry eye in the place, Morris said.

That’s just one of many ways “God has come through” since the devastating fire. “It’s been just blessing after blessing,” Morris said.

Donations from individuals and churches already have begun to come in, he noted. “I’ve probably had over 80 calls from pastors or staff members of churches asking, ‘How can we help?’”

One pastor called and said his church had a surplus leftover. They sent a check for $12,000. “Now that’s God’s family taking care of each other,” Morris said. 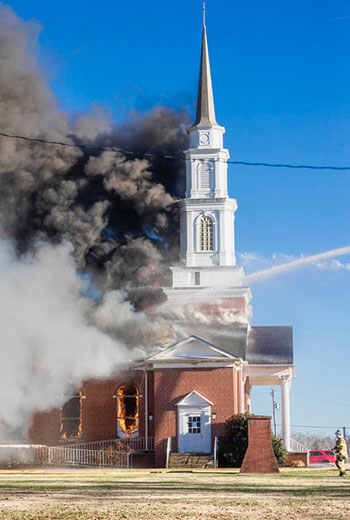 On the Monday after the fire, Morris walked around the burned-out sanctuary looking at the charred ruins of the historic church, which began in 1878. The church treasurer was across the street with a group of onlookers, and he motioned for Morris to come over.

As Morris started across the street, a woman met him. “Pastor, I’ve walked around this church, praying for it a number of times,” she told him. “As I was praying at home this morning, God told me to come down here to meet you.”

Morris stuck out his hand to greet her. When he pulled it back, some money was in his hand. “She said, ‘I’ve got to go. I’ve done what God told me to do,’” he recalled.

Later, the treasurer and the church’s project manager went to a local bank to open an account for the church’s disaster relief fund, and an employee

informed them that $100 was required to open an account. At the time, neither thought they had the necessary money.

Then, the treasurer remembered the money from the woman that Morris had passed to him earlier. He reached into his pocket and pulled out the money to count it.

“It’s been going that way ever since with all kinds of things,” he said. “God is using so many people,” he added, noting that other churches have donated sound equipment, chairs, staging, and other items. A local Methodist congregation has even offered its former parsonage to use for office space.

According to Cowpens’ fire chief, the fire had started where the church’s furnace was located. The fire did not look suspicious and was an accident, he determined.

When Morris pulled up at the church that Saturday afternoon, he knew, “There was no saving it.” The sanctuary and educational building were engulfed in flames. The educational building had a continuous attic space, he added, and the fire “shot through there like crazy.” The church’s steeple and brick walls were the only things standing two hours after the fire.

As soon as he saw it, “my heart was broken,” Morris recalled. His second thought was, “Where are we going to meet tomorrow?”

While Worship Pastor Larry Lawson and Morris stood in the parking lot watching the church burn, Lawson called School District Three’s administrators, and by 5 p.m., they had somewhere to meet the next day. Members gathered in the Fine Arts Center at Broome High School, where they grieved their tremendous loss. The church’s family life center is being converted into a temporary sanctuary.

A television reporter asked Morris, “What are you going to do now that your church is burned down?” He replied, “My church didn’t burn down. It’s just the buildings. The church will meet tomorrow.”

“That’s kind of been the theme for everybody: We’re the church,” Morris said. The church held “a very sweet worship service” the day after, he said.

“The building burned. It’s gone,” he told members. “I know that there are many good memories of that building — things like weddings, funerals and baptisms,” he continued. “But the fire can’t take away our memories. Right now is the time for us to think about those memories and talk about them,” he urged.

“It’s chilling that the church is gone,” Terrell Lipscomb, 96, told the Spartanburg Herald-Journal. “I have a lot of memories going there. My children and grandchildren grew up in that church.”

Many took time during the service to share special memories. But the members of Cowpens First resolved that “from this point forward, we look forward to what God’s going to do in our midst, and how He’s going to take this and build out of the ashes,” Morris said. They’re very excited about it, to see what God is doing.”