Since 1974, pro-life groups in South Carolina have been whittling away at Roe v. Wade. Now, S1, better known as the Heartbeat Bill, has taken Roe all the way from 39 weeks back to the detection of a beating heart, or approximately eight weeks.

Progressive pro-abortion forces like to encourage pro-life advocates to “follow the science.” The Heartbeat Bill uses science to push Roe to what we pray will be the breaking point. Medical consensus and common sense will tell you that when there is a beating heart, there is life. That is true on both ends of the life chain, from life in the womb to a life that is approaching death. As long as there is a heartbeat, there is life.

In medical emergencies, the question is always, “Can you feel a pulse, or can you hear a heartbeat?” When families gather around the bed of a loved one as they approach eternity, their eyes (and often their ears) are fixed on that one unmistakable, undebatable symbol of life: the heartbeat. The heartbeat is the sound that ends all debate about the presence of life.

Now, when an abortion-minded woman enters an abortion clinic in South Carolina, the question will be, “Is there a heartbeat?” If the answer is yes, the abortionist will have to say no. Babies with a beating heart will be protected by law from having their lives swept away as if they have no value. 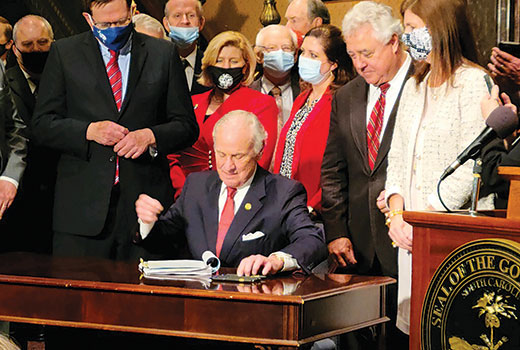 South Carolina has become the 11th state to pass a fetal heartbeat bill. Texas may soon be making it an even dozen as its version of a heartbeat bill works its way through its State House. As more and more states roll back Roe to the detection of a heartbeat, the message to the United States Supreme Court is clear: Americans are ready for some radical restrictions, and perhaps a complete ban on Roe.

How did the Heartbeat Bill make it to the governor’s desk? It began in the South Carolina House in the spring of 2019 as H3020. It was championed by Greenwood Representative and House Family Caucus leader John McCravy. The House gave the bill its overwhelming approval (70-31), but the Senate didn’t take up the bill until the committee process began in the fall of 2019. The bill passed the Senate Medical Affairs Subcommittee and the full committee, and was passed on to the floor of the Senate for the beginning of the 2020 legislative session.

To make it onto the Senate’s legislative calendar, H3020 would need to be set for special order. But the leadership in the Senate wanted to make sure the votes to close down debate (cloture) were available before the bill would be debated on the floor.

In January 2020, a group of pro-life, pro-family, grassroots organizations known as One Message came together to bring more than 350 people to the lobby that separates the House and Senate chambers. It was one of the largest crowds ever to gather in the Statehouse. The press conference featured pro-life and pro-family leaders from all across South Carolina. Gov. McMaster took the podium and promised to sign the heartbeat bill as soon as it reached his desk, and Attorney General Alan Wilson promised to defend it in the courts.

But even with one of the largest pro-life pushes in the history of South Carolina, it looked as if the Heartbeat Bill would still be three votes short of the 24 votes needed to guarantee that debate would be shut down. The push continued until early March, when COVID prematurely ended the 2020 legislative session.

When the 2021 Legislative Session began, the Senate pushed the Heartbeat Bill to the front of the line. It passed the Senate in record time for a pro-life bill with an overwhelming 30-15 vote. The House took up the bill, passing it out of the judiciary subcommittee by a 3-2 party line vote, and then the full judiciary committee passed it to the floor of the House on a 15-8 vote.

On Wednesday, Feb. 17, the House was able to push through more than 100 amendments when the Democrats decided to walk out of the chamber, staging a press conference in the lobby to rail against the bill. Several delay tactics were either defeated or endured, and the final vote on second reading of the bill was an overwhelming 79 to 35.

Third reading of the bill took place on Thursday, Feb. 18, with the bill passing the House, followed immediately by a signing ceremony with Gov. McMaster. South Carolina is now on the record as one of the most pro-life states in the country.

The abortion rate hit its peak in 1988, with 14,133 abortions performed that year. But 13 pro-life bills later in 2019 (the last year when numbers were available), there were 5,101 abortions. That is still exactly 5,101 too many, but it represents a 64 percent drop since 1975. Now, South Carolina is poised to reduce that number by as much as 90 percent. Even with the undesirable yet politically necessary exceptions for rape and incest (but with the doctor required to report those crimes to local law enforcement), that is a huge South Carolina win for life. To God be the glory, great things He has done!

— Tony Beam is director of Church and Community Engagement for the Tim Brashier Campus of North Greenville University and director of the Office of Public Policy for the South Carolina Baptist Convention.