Lowndesville Baptist Church in rural Abbeville County held its first services in a new, larger sanctuary in January. Yet, the big blessing is that the small congregation is debt-free.

“We’re fortunate. We don’t owe a penny on this church,” rejoiced Pastor Fred Griggs. A generous member’s bequest and estate gift provided all of the funding for the building.

Its new sanctuary, which also includes six Sunday school rooms and a choir loft, seats 220. “That’s a lot bigger than what we had,” Griggs said.

The rural congregation had a pre-COVID attendance of about 70 to 80 people, but the previous sanctuary could comfortably seat around 150, Griggs estimated. 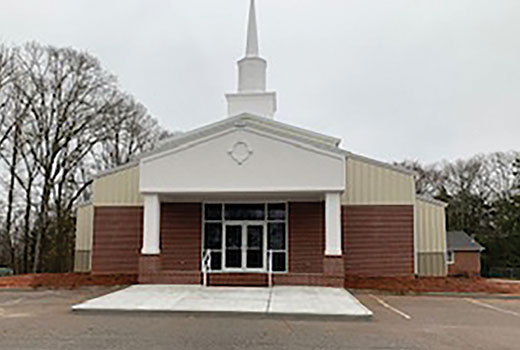 When the new building project started in December 2019, church members met at a funeral home in nearby Iva. But with the onset of the coronavirus, that was halted. For a while the church offered only online services before beginning a parking lot service. Then when some wanted to return to worshipping inside, the only option was to use the fellowship hall.

About 15 to 20 people have been meeting there, while others continue to worship online. Members haven’t met for Sunday school since the virus began. “Many of our people are retired, so we’ve got to be careful,” Griggs said.

On Jan. 24, though, church members reunited for the first service in their new sanctuary, and they celebrated the Lord’s Supper together the following Sunday. “Our first Sunday, we had over 60 there. The second Sunday was down, but the third week we had new people coming in again,” Griggs reported.

And, in the midst of a pandemic, Lowndesville collected its largest Lottie Moon missions offering in years — more than $1,000, he noted. “Now, for some churches, that’s nothing … but you’re talking about a small congregational gathering. When you’re only getting 20 people basically, on a Sunday, congregating, God’s doing something.”

While church members are very appreciative of the gift of approximately $1 million by the late Walt Hill — a longtime member who grew up in the community and was once a deacon at Lowndesville — they also see it as God’s provision for the church.

“He [Hill] gave it all to us. Not only the money, but he gave us nine acres of land across the street, and the house that he lived in, and the van that he owned,” Griggs said.

Meanwhile, the building Lowndesville was meeting in was built in 1887, and members did not realize the damage internally that had happened through the years. “Termites had, in some cases, pretty near eaten through the pillars. So, we ended up having to tear down everything except for the fellowship hall,” Griggs explained.

“God gave the vision [of a new building], and then God miraculously provided the resources through Walt — through his stewardship, all of those years of putting money away,” he continued. “That’s a lesson for everyone.”

Griggs also noted the efforts of church member Henry Lynch, who oversaw the project. “If we had to hire someone to do what Henry has done, it would have been thousands, probably $20,000 or $30,000. He was here every day, every morning,” he noted.

“When we tore the old building down — now understand Henry’s 74 years old — he climbed in there and used a saw to help cut stuff away,” Griggs said. “He didn’t want any recognition for it. God gifted him with all the skills that we needed to get this building done.

“It’s all been a work of God, none of us want to take credit for any of it,” Griggs said. “At the same time, God does work through people. So, we see God’s miraculous movement in a vision, and a person with the financial resources, and a person with the gift to oversee this building project,” he added. “We just praise God for it all.”