What led Josh Powell, senior pastor of Lake Murray Baptist Church in his hometown of Lexington, to accept the pastorate of First Baptist Taylors?

He emphasized, “I wasn’t looking for a church. I was happy at Lake Murray and I am thankful for that church.”

Powell, his wife, Allison, and their four kids are already adjusting to their new home. The kids are in school, and Powell began his pulpit ministry at the church with a series of sermons on the Great Commission Feb. 14.

Both he and Allison are pastor’s children, and both their grandfathers were also preachers. His dad pastored a church for 34 years in Lexington, so Powell never had to change schools or even his friend group. But his kids did. “I would have been terrified to do what they are doing. But, man, they have been a blessing to me — just to watch them deal with the transition and God calling their dad. It has been my desire from the beginning for them to understand that this is the church calling our family,” he said. 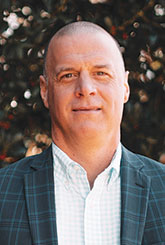 Powell preached his trial sermon at the church on Jan. 21 — with the congregation voting on extending a call to him to become pastor following his messages in the two services as well as online.

“When we finished the second service and they were voting, we went to a back room. A lady was talking to my five-year-old son and took him to get some water. He looked at her and said, ‘I know this church is going to vote my daddy in.’ She said, ‘Really?’ He replied, ‘Oh yeah. Oh yeah, because God wants me to see snow.’ She laughed. We all laughed,” Powell said.

The church voted over 98 percent to call him. The following Saturday evening and Sunday, snow blanketed the Upstate. “He got up Sunday morning and saw snow and said, ‘I knew God wanted me to see snow.’ In Lexington, we hadn’t seen snow in forever,” Powell added.

He was president of the South Carolina Baptist Convention in 2020 and currently serves as a trustee for Southern Baptist Theological Seminary in Louisville.

As he and Allison prayed for direction, they also had questions. Was it the right time, since the nation is in the throes of a pandemic? “We were where our roots grow deep (Lexington), and they are strong. But we both were solidly clear that the Lord was calling us to Taylors First.”

Powell has talked about the importance of Southern Baptists having a conversation about racial reconciliation. “Taylors First has been dealing with this as well and already has a racial reconciliation group. It is a conversation they have already begun, and I am happy to join in with them,” he said. “I just want to be faithful to God’s Word — love God and love our neighbor. Who is our neighbor? Anybody in our community, regardless of socioeconomic status, race, or skin color. My desire is for us to be a gospel-centered people who reflect the glory of God and the kingdom like we see in Revelation 7.” (In Revelation 7:9, John was shown a crowd too large to number “from every nation and all tribes and peoples and tongues … .”)

During his transition period, Powell wants to “see what key fits which door. I want to find out what’s going on and get to know the staff and the people in the church. I could not be more thrilled with the possibilities of serving at Taylors First and getting ready to jump in and see what the Lord does.”