Carlotta Jackson gave birth to nine children, homeschooled all of them, and will celebrate the birth of her 12th and 13th grandchild later this year. The wife of family physician Robert Jackson and a nurse herself, she and her husband have devoted themselves to pro-life ministry, missions, and discipleship. She said, “I am so glad I never quit. I’m so glad I had a multitude of children, and I am one blessed woman.”

On April 5, her third daughter, Miriam, was giving birth, and Carlotta was by her side. Miriam asked, “Why? Mama, why did you have all of us?” After pondering Miriam’s question for some time, she wrote, “It would have been easy to quit when my sixth was born with a respiratory defect requiring an ICU in our living room for 18 months. It would have been easy to quit during the season of 25 eye surgeries for my husband, or the sleepless nights when a child was out late or one was making poor choices, when the stomach virus ran through the entire family like a biblical plague, or when we had to pay for five daughters to marry!” 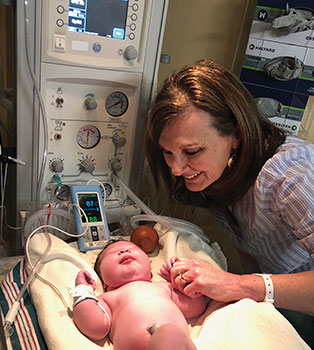 Carlotta Jackson with her newest grandbaby.

That day, she looked at Miriam and gave her an answer for why she gave birth to her and her siblings. “In a few minutes, you’re going to deliver a little person, and that little person will be amazing, simply amazing. You are about to find out what love really is,” she said.

She says she learned much about love and sacrifice through raising her children. “I turned a deaf ear to the world’s unbiblical and distorted view of marriage, womanhood, and the value of children. I ran to the Word of God that told me children are a gift of the Lord, the fruit of the womb is a reward — and I just happened to believe it,” she said.

“Then I read, ‘Like arrows in the hand of a warrior, so are the children of one’s youth. How blessed is the man whose quiver is full of them,’” she continued. “My husband and I did our best to shape those arrows — with the Lord’s leadership — to fly straight and true by discipling our own children. We did not rely on anyone else to do what we believed we should do. Now we have shot our arrows into the world to continue advancing the kingdom of God in their circles of influence, according to His calling on their lives.”

She met her future husband while a student at Clemson University. Following graduation, she was a Journeyman missionary in Gaza serving as head nurse for the wards at Gaza Baptist Hospital. During that two-year appointment, she saw 22 Muslims come to Christ.

Both she and Robert planned on serving as missionaries, but during his medical school training, they discovered he had glaucoma — which was the beginning of many surgeries that prevented them from serving as missionaries with the International Mission Board. They turned their focus to mission trips, discipleship, and raising their growing family.

Robert served as the principal of their homeschool program they named, “In His Steps Academy,” while Carlotta was the teacher. Disciplinary issues were handled by the principal. Their fifth born (and first son) said, “I spent an inordinate amount of time in detention until the ‘Princip’ arrived home to give me my community service assignment, which was usually picking up rocks or stacking bricks. It is probably because of me that the driveway is clear of rocks and the bricks are stacked high today.”

The Jacksons got into the habit of reading books to their children. One book was “Sir Knight of the Splendid Way.” In one chapter, Sir Knight and a shepherd (God) are depicted at the home of the warden of a well. The warden, who was near the end of life, kept the well clean, providing drink, shelter and food for travelers. The shepherd told the warden the story of a nameless knight who served the king faithfully by guarding an empty post for years — no glory, fame or reward. He gave all glory to the king. The shepherd said the nameless knight was known by the king. In the story, the nameless knight turned out to be the warden of the well.

Rebecca wrote to her mother, “The image of you crying over that story has stayed with me all these years. Dad sat and looked at you lovingly. I understood why. You saw yourself as the warden, doing a thankless, mundane job, all the while knowing you were capable of more. Well, nameless stay-at-home mom, the King knows your name. Like the warden, you are capable of more, so much more, but God called you to a certain path for a purpose. You have fulfilled that task faithfully and loyally. I love you, Mom! I am so glad God gave me to you, for no one else could have raised me as well as you did.”

In His Steps Academy ended in 2019 after 30 years of homeschooling. On that occasion, her children wrote her a letter. Her two special needs children are Thomas and John Richard. Thomas said, “Mom, you are mine. You are my heart. I love you, Momma.” John Richard said, “Thank you for homeschooling me, taking care of me, cooking for me, and caring for me. I love you with my whole heart.”

Rob said, “My mommy never gave up on me. She slaved day and night to make sure I had the best education she could offer. I may not have listened well in class, made good grades, or been very likeable, but I was still learning. A teacher can only teach so much, but the love of a mother teaches much.”

Miriam wrote, “Mama, I praise you for your endurance as you raised nine children and chose to give of your own time and energy. I praise you for the love that you have given to each child and to Dad unconditionally. I can never give back as much as you have given to me. Because of your love for the Lord, you loved your family above yourself. I praise, love, and thank you, Mama.”

Hannah listed 22 things her mom taught her, adding that it was only a few of the things she had learned from her mother. She wrote, “You used to say, ‘Your mother is smart, and don’t you forget it.’ While that is true, I would add that my mother is smart and could have been anything she wanted to be. I love you, Mom, and I’m incredibly grateful for everything you sacrificed to give me the earthly gift of an excellent education and the eternal gift of a deep love for the Lord.”

Carla, who is working on a nursing degree from North Greenville University, is the only one of her siblings to follow her parents into the medical field. Her message to her mother was, “I know, without a doubt, you have prayed for me probably more than any other human being, and I want to be a loving teacher, supporter, and mother just like you. I want to approach the throne of God every day and lift up my children and my husband to the Lord just like you. I want to face trials with faith and trust in God just like I’ve seen you do. I admire you so much. I want to be like you. The impact you have had on my life will last my whole lifetime. I love you, Mommy.”

Jehu wrote, “Mom, you have sacrificed more time, effort, energy and more ‘me-time’ than any of us could ever comprehend. Thank you for your prayers. Thank you for being a prayer warrior, and thank you for never doubting me.

When I doubted my ability in high school and college or even to do the right thing, you were there to encourage, support, and pray for me. You are the best mom, and I love you.”

Firstborn daughter Rachel lives in Alaska with her husband and three children. She works with foster children and thanked her mom and dad for the “strength and firm foundation in God’s Word. In a culture permeated by darkness, I am thankful for my parents, who taught me what is good in this world.”

Proverbs 31:28 says the children of a godly woman “rise up and bless her.” All of Carlotta’s children unashamedly and enthusiastically praise their mother for being a Christian mother, caring grandmother, and loving wife.

She is an unusual woman in the best sense of the word. Her commitment through the years speaks volumes about her devotion to Christ and her family. She confidently says, “I am one blessed woman,” but she is quick to point out, “If there is any worth in me, it’s because of Jesus.”