Celeste Toole learned the importance of making missions a lifestyle from watching her mother.

Her mother, Patsy Waters, served as Woman’s Missionary Union director at First Baptist Church of Camden for nearly 20 years. And, when she ended her tenure of service in 2013, Toole naturally followed in her footsteps.

In describing the impression Waters made on others, Laurie Register, executive director of South Carolina WMU, said, “She desired that people understand how to live on mission and to support those who were called to career missions.

“That she modeled a missions lifestyle is evident in the life of her daughter. Patsy’s legacy lives on through Celeste, and so many others she touched through her leadership and her ministry through WMU and her church,” Register said.

“My mother had a profound impact on me, especially in missions. She poured her life into missions and serving others,” said Toole. “She was such a good teacher and example for me, and I hope that I can continue leading and serving others as she led and served me.”

Toole started attending WMU circle group meetings with her mother before she could even walk. “Mama would bring me and put me in a stroller or a baby seat, and I would be part of those WMU circle groups, from when I was only a couple of months old,” she recalled.

One of her mother’s first responsibilities at Camden First many years ago was organizing activities for the Young Women’s Auxiliary, forerunner to Baptist Young Women. As an elementary school-aged girl, Toole remembers watching the high school girls doing missions activities at her house or the church.

“I’m an only child, and so I just went along with Mama — and pretty much whatever activities she had planned, I was there,” Toole said. 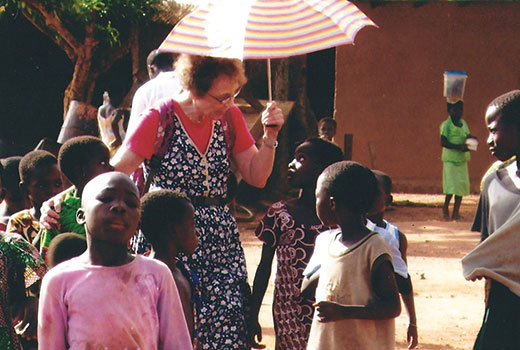 Ghana children surround Patsy Waters, who led a mission trip of five women to Nalerigu in 2008.

Her mother’s life of missions service, however, began well before Toole arrived on the scene.

“Mama really got her start in missions leadership when she was a counselor and lifeguard at Camp Rawls (now LaVida) when she was in high school and college,” Toole recalled. Even before then, Patsy grew up in Sunbeams and Girls in Action, learning about missionaries, she added.

As a faithful member of Camden First, Waters helped organize a prison ministry at Willow Lane Prison for Girls in Columbia, sang in the Adult and Silvertones choirs, was a teacher for the JOY Sunday school class for disabled adults, and often coordinated backyard Bible clubs in neighborhoods. Having a passion for missions, she also served as a trustee of the Foreign Mission Board, now International Mission Board.

Fellow church member Paulette Munn recalled that, as a young Acteens director, Waters had challenged her so many times. Describing Waters as “the epitome of WMU,” Munn added, “My life has been enriched so much by her life!”

“I had never met anyone who designed her home with places to store her WMU materials,” Munn said. “I followed her around like the Pied Piper.” 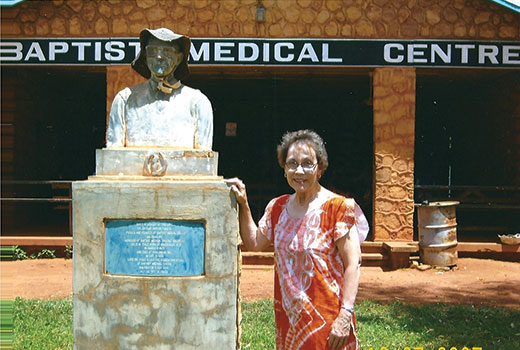 At the Baptist Medical Centre in Nalerigu, Ghana, Patsy Waters stands beside a bust of her first cousin, Dr. George Faile Sr., foreign missionary surgeon who founded the hospital. This was her first mission trip in 2007 at age 72.

It wasn’t until age 72, however, that Waters went on her first overseas mission trip in 2007 to Ghana, West Africa, where her cousin, George Faile Sr., a missionary surgeon, had founded a hospital in Nalerigu. She led a missions team of five women to Nalerigu the next year. “It was fun on my part, helping her get ready to go,” Toole said.

While Waters was serving as WMU director for the second time, Toole led the Girls in Action group. “To watch her and see how she led all the different organizations in our church, and having her mentor me through that role, that was a neat thing.”

So, when it came time for Waters to turn over the reins to someone else, the decision was an obvious one.

“I was on her WMU council, and I said, ‘Well, I have a list of ladies who would be a good replacement,’” Toole recalled. “When I called her to get her advice, she said, ‘Oh, I know exactly who I want to replace me. You know.’” Toole suggested a few names, but Waters shook her head. “Oh, no, you’re the one,” she said.

“That was really special to me,” Toole said, “that she realized what her leadership and training had done was to bring me into a leadership role.”

As WMU director now, Toole continues to teach a missions lifestyle to GAs at Camden First.

“Celeste is a breath of fresh air. She is positive, energetic and intentional,” said Cindy Skelton, preschool and children’s associate for state WMU and Camp LaVida program director. “Celeste sees the value of missions discipleship and gives leadership to all ages in her church. She ensures that her children receive the finest missions discipleship education that can be offered.

“She is a woman of integrity, organization and passion to serve God. She serves well and brings people along with her,” Skelton added.

As WMU director, Toole encourages members of Camden First to participate in its missions partnership in Ecuador. She has been part of several teams that have gone there and to help a church plant in New York.

“It doesn’t matter if you’re doing missions in Ecuador, in New York, or just down the street, we still have a mission that we’re supposed to do — reach the world,” Toole said. “I can still focus my mission right here where I am.”

“Let’s make missions a lifestyle,” Toole often signs emails. It’s what her mother, who passed away last August, modeled for her, and it’s what she hopes to pass on to her own daughters, Kathleen and Meredith, and others at Camden First Baptist.