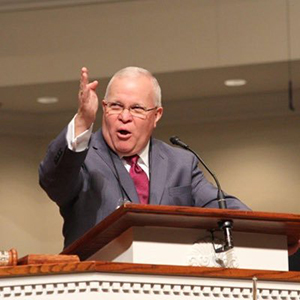 But Andrew Hopper, chairman of the Committee on Nominations and pastor of Mercy Hill Church in Greensboro, N.C., said in response that the decision to exclude Tucker from the nominees was a unanimous decision made more than a year ago.

His term was set to expire in 2020, but was extended a year by the cancellation of the 2020 SBC annual meeting because of the COVID-19 pandemic. Tucker was then elected EC vice chairman in June 2020.

“Our committee has sought to honor the way that the bylaws and these things are written, and the traditions that we all hold dear. And I think that we have done that,” Hopper said. “In this situation, our committee and especially our nominators from South Carolina decided not to do that for a simple reason.”

Hopper noted that while Tucker had only served one full term – plus the extra year after the cancellation of the 2020 annual meeting – his tenure on the EC had begun when he filled a vacancy for an EC slot in a previous term that had two years remaining.

“While you are correct that Mr. Tucker had served one term, he had come in on a previous term,” Hopper said. “He had not only served two years of a previous term, but then served his full term, and then was going to be given another term. So it’s not really about a second term. What we’re talking about is kind of a super-term — a long term.”

In its meeting Monday, the EC chose Tucker over Oklahoma physician Micah Nix. The EC is expected to hold an election for vice chair to fill the vacancy during its next called meeting, which is scheduled for September.

Tucker is a member of the Conservative Baptist Network’s steering council.