As many Protestant denominations prepare to gather this summer for their national meetings, most pastors believe it is vital for their church to be part of a denomination but doubt the importance of those types of ties lasting another decade.

A LifeWay Research study asked Protestant pastors their thoughts on the importance of denominations and how they believe denominations will fare in the next 10 years.

“Among Protestant churches in the United States, there continues to be denominational splits and disputes, the emergence of new local and national non-denominational networks, and the presence of a large number of churches that do not belong to a denomination, convention or conference,” said Scott McConnell, executive director of LifeWay Research. “This begs the question of whether those within Protestant denominations still see value in them.”

Almost 8 in 10 Protestant pastors whose church is in a denomination or denomination-like group (78 percent) say they personally consider it vital to be part of a denomination, with 53 percent strongly agreeing, according to the Nashville-based research firm. One in 5 disagree (20 percent), while 2 percent are not sure. 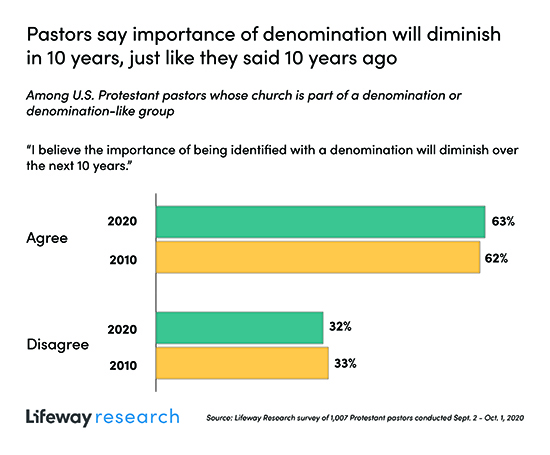 Pastors believe their congregations share their opinion about the denominational ties. A similar percentage (77 percent) say their congregation believes it is vital for their church to be part of a denomination, though fewer strongly agree (44 percent). Again, 21 percent disagree, and 2 percent are not sure.

“While the connections of some denominations are completely voluntary, those of others are deeply rooted in their polity,” said McConnell. “Yet communicating the importance or the benefits of relating to the denomination in this way cannot be taken for granted. One in 5 pastors do not see that value today.”

“Many, including pastors, who predicted the demise of Protestant denominations in the U.S. have not proven prophetic,” said McConnell. “The fact that younger pastors are less pessimistic could signal better days ahead for denominations, or at least fewer memories of the worst days.”

While it is impossible to know how those predictions will fare 10 years from now, pastors shared similar views in 2010, according to a previous LifeWay Research study.

In 2010, 62 percent believed the importance of being identified with a denomination would be diminished by now. The total percentage who sees a coming decline is near the current 63 percent, but fewer today are as confident in their prediction. A decade ago, 28 percent strongly agreed the importance would diminish. Today, the percentage dropped to 19 percent.

Pastors may be more pessimistic about their denominations than those in their communities. A 2015 LifeWay Research study on Americans’ views of denominations found most were open to churches connected to major Christian groups. No matter the denomination, fewer than half of Americans, even among the nonreligious, said a church connected to that denomination was “not for me.”

— Aaron Earls is a writer for LifeWay Christian Resources.

For more information, view the complete report or visit LifeWayResearch.com.

Each survey was completed by the senior or sole pastor, or a minister, at the church. Responses were weighted by region and church size to reflect the population more accurately. The completed sample is 1,007 surveys (502 by phone, 505 online). The sample provides 95 percent confidence that the sampling error does not exceed plus or minus 3.4 percent. This margin of error accounts for the effect of weighting. Margins of error are higher in sub-groups. Comparisons are made to a LifeWay Research phone survey of 932 pastors conducted March 1-9, 2010, using random sampling.