With more than 423,000 Louisianians still in the dark for days after Hurricane Ida’s landfall, Southern Baptist Disaster Relief teams were working hard to repair homes, serve food and share Christ’s love in the region.

In early September, South Carolina Baptists had a 16-member Disaster Relief team from Columbia Metro Association working in Belle Chasse, La. Another chainsaw crew of eight members from Pee Dee Association was there on Sept. 13.

The next week, units from Prosperity, Union, and North Conway headed for Louisiana, taking 12 more volunteers. Disaster Relief teams from Edgefield, Barnwell-Bamberg, and Three Rivers associations also were scheduled to assist, as well as a mass feeding team from across the state. 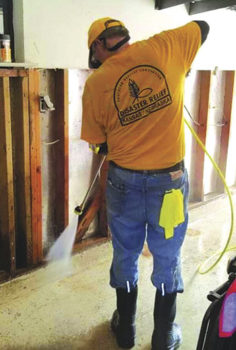 A Kansas-Nebraska Disaster Relief worker sprays for mold inside a home impacted by Hurricane Ida. (Photo by Patrick Dennis)

Among other teams working to restore hope in Louisiana were North Carolina Baptists. Tom Beam, North Carolina Baptist Men/Baptists on Mission coordinator, said, “Not only are we here preparing meals for people in need and cleaning out houses, we also have an opportunity to share the gospel.

First Baptist New Orleans Pastor Chad Gilbert said the North Carolina team has been one of many groups and individuals who have continued to pour out love to those in his community.

“Thankfully, Southern Baptists have rallied,” Gilbert said. “Continue to send every resource you can. Maybe find a local church and partner with them uniquely to send resources, pray for them, partner, send teams. It’s been amazing for me to see God at work through the body of Christ.”

About 45 miles to the north, since Sept. 4, teams from Arkansas have been preparing meals, completing chainsaw jobs, offering showers, and doing laundry loads at Woodland Park Baptist Church in Hammond. Incident commander Jay Woods said helping others get back into their homes is important, but sharing the gospel is the ultimate goal.

“Our teams actually talk to people one on one, spread the gospel and tell people about Jesus,” he said. “None of our teams go out without telling the families that they are dealing with about Jesus, which is our number one priority. And that’s what we are doing here.”

— Article written by Louisiana Baptist Message staff. With reporting by The Courier.