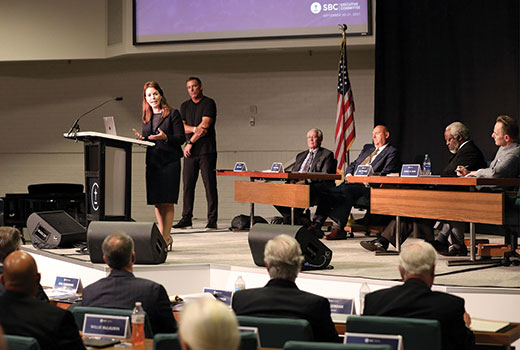 In a second, special called virtual meeting Oct. 5, members of the Southern Baptist Convention Executive Committee voted 44-31 to waive attorney-client privilege in a third-party investigation of the EC and its handling of sexual abuse claims.

The approved Executive Committee motion, made by Jared Wellman of Texas, states: “I would like to make a motion that represents the will of the messengers of a selective waiver that includes an investigation into any allegations of abuse, mishandling of abuse, mistreatment of victims, a pattern of intimidation of victims or advocates, and resistance to sexual abuse reform initiatives of the actions and decisions of staff and members of the Executive Committee from Jan. 1, 2000, to June 14, 2021.”

Wellman’s motion called for the Executive Committee to “authorize our chairman to execute the contract with Guidepost that we received on Oct. 1, 2021, which includes waiver of attorney-client privilege in accordance with the action of the messengers to the 2021 Southern Baptist Convention.”

EC chairman Rolland Slade was authorized to appoint the two EC members. The committee members must be among those appointed to their first term in June 2021 to allow the participating EC members to be outside the scope of the investigation.

At the SBC annual meeting in June, SBC messengers voted for the formation of a task force to oversee an investigation of the EC by a third party.

The Sexual Abuse Task Force has contracted with Guidepost Solutions to lead the investigation, and EC trustees have allocated up to $1.6 million for the task force to complete a report that will be due 30 days before the 2022 SBC annual meeting in Anaheim, Calif., on June 14-15.

EC officers have been working with attorneys and EC senior staff to navigate the issue of waiving attorney-client privilege while still protecting the fiduciary responsibility entrusted to them.

Since the last meeting, several state conventions and Southern Baptist pastors, including 25 from South Carolina, have called for the EC to waive attorney-client privilege and “follow the will of the messengers.”

Insurance attorneys had been counseling EC members against waiving attorney-client privilege, as called for in the SBC messengers’ original action in June, launching the investigation.

However, in a statement released Oct. 4, the Sexual Abuse Task Force said, “[T]here is simply no way to ascertain if the risk will ever be realized, and there are multiple proof thresholds which would have to be met before insurance proceeds could be lost for any specific case.”

It also added that the task force was not asking for a blanket waiver, but one that covered only the time period of 2000 to 2021 and was limited to “any allegations of abuse, mishandling of abuse, mistreatment of victims, a pattern of intimidation of victims or advocates, and resistance to sexual abuse reform initiatives.”

The task force statement said the investigation will include only staff and members of the EC who have acted or made decisions on behalf of the EC during the period in question.

Concerns related to both the loss of insurance and waiving of privilege have led six trustees to resign from the board in the weeks prior to the Oct. 5 meeting.

Bruce Frank, task force chair, responded to the EC on behalf of the task force, saying, “The task force is pleased with the strong vote by the Executive Committee to abide by the moral imperative directed by the messengers, seminary presidents, state leaders and many, many more.”