Messengers to the 201st annual meeting of the South Carolina Baptist Convention celebrated the convention’s bicentennial year, approved the creation of a task force to review sexual abuse policies and procedures, and elected a Newberry pastor as president-elect.

International Mission Board President Paul Chitwood was keynote speaker for a missionary commissioning service that kicked off the Nov. 8-9 sessions at First Baptist Church in Columbia, which also featured a closing message by best-selling author and nationally-known evangelist Tony Evans.

Drawing on the theme for the 2ooth anniversary, “Advance Together,” SCBC Executive Director-Treasurer Gary Hollingsworth observed, “Looking back is important, but looking forward is imperative.”

“The whole concept of ‘Advance Together’ is not new; it comes from the heart of God,” he said. Advancing Together through missions, education and cooperation is what brought South Carolina Baptists together, and “it’s what, by the grace of God, will keep us advancing the next 200 years.” 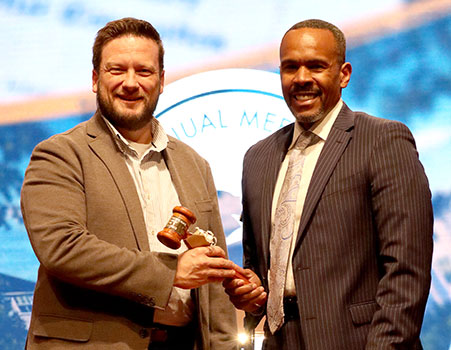 Alex Sands, the SCBC’s first African-American president, reminded the 762 registered messengers that Richard Furman, the first president of South Carolina Baptist Convention — who was a slaveholder — had a “blind spot” because of the culture. “A man who was so theologically sound and such an outstanding leader had this blind spot where, in his mind, he thought there wouldn’t be a day when someone with my [skin] complexion … would be here in Columbia addressing the convention,” he said.

“The problem was he allowed artificial designations from culture to dictate his theology,” Sands said. “Praise God, we are in a better day!”

Two hundred years ago, “God was using fallible people to do heavenly work,” he said, referring to their formation of a state convention. “We shouldn’t be ashamed of telling our story, because when we don’t tell it we’re robbing God of glory. When we can say, ‘Look at our beginnings … and now look where we are 200 years later,’ only God could get the glory from that. It certainly was not man,” he said.

“Oh, but look at our God, and what He has done!” Sands exclaimed.

Yet, a spirit of division is still active and well, and has infiltrated the church, he observed, offering some “preventive medicine” from Philippians 2. He challenged South Carolina Baptists to rid themselves of the “artificial differences” that are so prevalent in our society.

Any divisions are from the adversary, who creates artificial divisions in the church so it won’t fulfill the mission that the Lord commissioned it to do, Sands said. “Are we contending together, or just contending for our side?” he asked. “Meanwhile, the work we are called to do suffers.”

During the business session, D.J. Horton, pastor of Church at The Mill in Moore, presented a motion calling for creation of an SCBC task force to respond to any recommendations regarding sexual abuse reporting and prevention to be made to messengers at the Southern Baptist Convention’s annual meeting in Anaheim, Calif., next June. 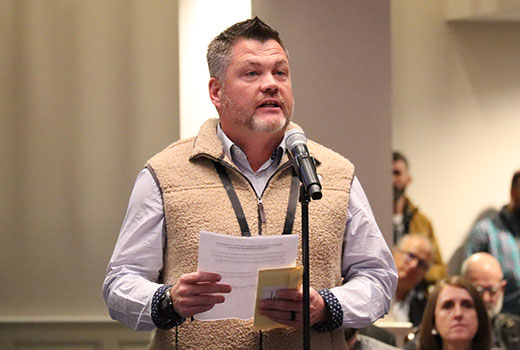 The incoming SCBC president was authorized to appoint members of the task force, which will bring a report to the SCBC’s Executive Board and to messengers to the SCBC’s 2022 annual meeting in Columbia. The action comes in response to the ongoing investigation of the Southern Baptist Convention’s Executive Committee and allegations of its mishandling of sexual abuse complaints.

“We all know the leadership that was displayed — even from this state — to encourage our Executive Committee on the national level to make the right decision, to look for the entire truth in relationship to sexual abuse and allegations,” Horton said. “And so, I believe it is important for our state [convention] to be ready. This report is going to be thorough; it’s going to be exhaustive; it’s going to be very complex.”

Urging South Carolina Baptists to be proactive in receiving the information from a report on sexual abuse that is expected to be presented to SBC messengers in Anaheim, Horton said the task force appointed by the SCBC president may be helpful in answering questions, such as, “How do we apply these truths to our churches? How do we become better at protecting women, at protecting children, and at handling allegations justly, appropriately and legally?”

Albert Allen, pastor of First Baptist Church, Newberry, since 2014, was elected by acclamation as president-elect of the South Carolina Baptist Convention at this year’s annual meeting. He will serve as president in 2023.

Allen has pastored three South Carolina churches and served in overseas missions in a high-security area for nearly four years among an unreached people group, Church noted. Allen currently is chairman of the SCBC Executive Board, he added.

Messengers adopted a $26.5 million Cooperative Program investment budget for 2022, which does not reflect an increase from the preceding year.

Nathan Hutson, chairman of the Bylaws Committee, brought a motion of proposed changes reflecting a desire to simplify and streamline the convention’s bylaws and current practices. Major changes include the elimination of the offices of second vice president and recording secretary, elimination of the Order of Business Committee, reducing the Christian Life and Public Affairs and the Resolutions committees by one member, reducing the Nominations Committee from 42 to 24 members, and incrementally reducing the Executive Board from 60 to 29 members based on 12 geographical regions by 2025.

Keith Davis, pastor of Zion Hill Baptist Church in Spartanburg, offered a successful amendment requiring that at least one of the two Executive Board members chosen from each region comes from a church with less than 200 in worship attendance.

South Carolina Baptists condemned all forms of sexual abuse and repudiated with a unified voice all sexually abusive behavior as unquestionably sinful; opposed the restriction of the use of public monies as an act of discrimination against religious institutions that operate according to their deeply held religious beliefs; rejected any position that allows exceptions to laws (other than the physical life of the mother) that are intended to abolish abortion and provide legal protection for all human life from the moment of conception.

They voiced opposition to the Clement C. Pinckney Hate Crimes Act, which they said elevates sexual orientation to the level of a protected class on par with immutable characteristics such as race, gender, color and national origin. They also called on federal and state representatives to support legislation ensuring that women and girls are allowed a fair playing field in competitive sports.

In the resolution commemorating the SCBC’s bicentennial celebration, messengers of the 201st session encouraged each person to develop new relationships with individuals from other neighborhoods, cultures and countries. “Our convention loves and appreciates African-American, Anglo, Asian, Hispanic, and other non-English-speaking pastors and congregations, we recognize further work is needed to better reflect the rich diversity of South Carolina,” they stated.

As part of the History Committee’s report, Jane Poster, who is retiring as SCBC archivist on Dec. 31, was recognized for her efforts in preserving church and associational histories. Poster has served the convention for 50 years, in part with Baptist collegiate ministries, and is the longest serving South Carolina Baptist Convention missionary, Hollingsworth noted.