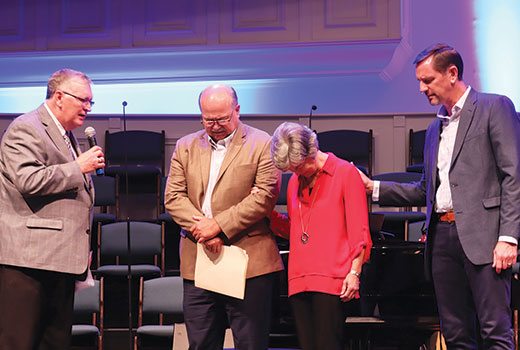 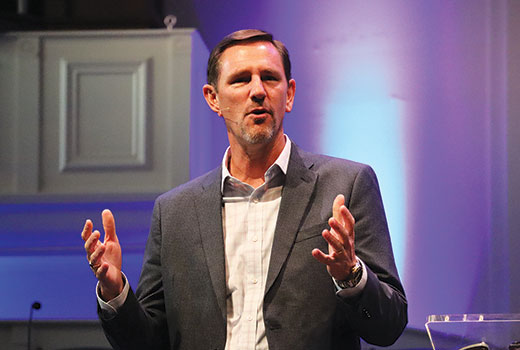 Three Rivers Baptist Association’s Missions Strategist Randy B.* is retiring at the end of this year and will be returning to the international mission field.

Paul Chitwood, International Mission Board president, was keynote speaker for Three Rivers’ Global Missions Celebration at First Baptist Church, Taylors, Oct. 10, which concluded with a time of commissioning for Randy and his wife, Karen.

Clark read a resolution of appreciation from the association’s leadership team, which stated, in part, “Beyond any shadow of a doubt, we have found him to be one of the most authentic, genuine and transparent examples of Christianity that we’ve ever known. Having had the privilege to not only do ministry but also to do life with Brother Randy, and his precious wife, Karen, we consider ourselves to be better equipped to serve others for Jesus’ sake.”

Randy announced his retirement and redeployment plans to TRBA’s Executive Committee in September. He and Karen will be deployed next spring to South Asia. They previously served in Argentina as IMB missionaries for 21 years before returning in 2007 to lead North Greenville Baptist Association.

Scott Shields, associational liaison for the South Carolina Baptist Convention, said, “I am thankful for the ministry and friendship of Randy. He is a true example of an ambassador for Christ — always encouraging, supportive, and willing to collaborate to advance the gospel.”

Randy and Karen will serve as Member Care consultants for the IMB. “We’ll have the joy of ministering to the field personnel as they go through different seasons of life,” Randy explained. “This will require much travel as we visit families who are on the front line.”

“We are thrilled because of their unique ministry assignment,” Chitwood said. As care team members, “they are going to be ‘washing the feet’ of those who preach the Good News” in that part of the world, he said.

Randy, a native of Chesnee, and Karen, a native of Chester, will leave three sons, three daughters-in-law and eight grandchildren stateside. A graduate of Furman University and Southeastern Baptist Theological Seminary, he earned a doctor of ministry from North Greenville University.

“The first people we called when we were praying about returning to the field were our boys,” Randy said. “All three affirmed us and gave their blessings for us to return to the IMB.”