Sangseo and Yun Na Park met and married in Korea, but they both felt God calling them to the nations.

“Once I personally met Jesus, I threw away my goals that I had in the world,” Yun Na said. “I went to a church conference and while we were praising the Lord with a song called ‘I want to be Your joy,’ my soul started to confess the lyric deeply.

“After I came back home, I was watching TV, and I saw an African mom holding her child and she looked as if she had no hope. God poured the Father’s heart upon me, and I fell to my knees and prayed. I prayed to God that ‘if You wish, please send me to those who have no hope.’ ”

The Parks were two of 39 International Mission Board missionaries who participated in a Sending Celebration Nov. 8 at First Baptist Church, Columbia. This Sending Celebration was hosted by the South Carolina Baptist Convention in conjunction with its annual meeting. Missionaries were approved unanimously for appointment in a virtual meeting of the IMB’s board of trustees Nov. 4.

Sangseo Park felt called to missions after working in architecture and urban planning in Southeast Asia. He was deeply moved by the sheer amount of need in the areas where he worked.

The couple moved to Fort Worth, Texas, to attend Southwestern Baptist Theological Seminary in 2010 and later to California to attend Gateway Seminary.

In the spring, the Parks, along with their kids — Joshua Young Kwang, Elizabeth Eunhye, Victoria Somang and Eleanor Onyu — will be moving to Mexico as missionaries. They’ll be researching the culture of a specific people group and planting churches. 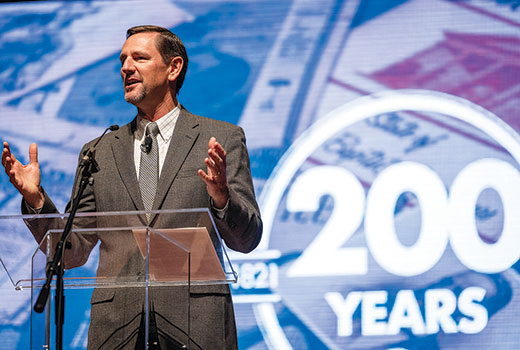 Chitwood acknowledged that more than 40 percent of Southern Baptists’ mission force has been cut since 2008. However, he reminded the congregation that the IMB is dedicated to sending the called to the nations.

“We’re not discharging soldiers,” he said. “We’re calling in reinforcements.”

The magnitude of those yet to be reached is “why we’re still here. That’s why we’re here tonight. We’re here to send these beautiful feet to take the gospel to the nations,” he said, adding: “Thank you for sending them so that they can share, so that the lost can hear, believe, call upon the name of the Lord, and be saved. Might God use us to that end and to His glory until Christ comes for His church.”

“Tonight, we’ve seen 39 be called out, but as you’ve just heard, we need more. Will you pray for more harvesters to go out into that harvest?” Lafferty said.

Monday’s Sending Celebration was the 30th anniversary of the service when Lafferty and his wife, Susan, were commissioned.

His commissioning “opened up a fresh vista of opportunity to fulfill the call of God in our life,” Lafferty reflected. Using the word vista as an acronym, he asked attendees to pray for the missionaries to: Have Vision; Show Integrity; Withstand in Spiritual battle; Be Transformed; and Abide.

The evening ended with friends and families of the missionaries gathering around them in prayer.

“This year our convention is celebrating 200 years, and we can’t think of a better way to kick off our meeting than celebrating the sending of our newest Southern Baptist missionaries to the nations,” he said.

“We are very thankful that we can join together with a coalition of Southern Baptist churches across North America to cooperatively send and support missionaries.”

Each IMB missionary is funded through the Lottie Moon Christmas Offering and the Cooperative Program. Through the Lottie Moon Christmas Offering, Southern Baptists have given more than $5 billion to international missions. Each dollar of the LMCO goes straight to the work the Lord is doing overseas. The Cooperative Program, in addition to funding overseas work of Southern Baptist missionaries, funds the support services in the U.S. for those missions. 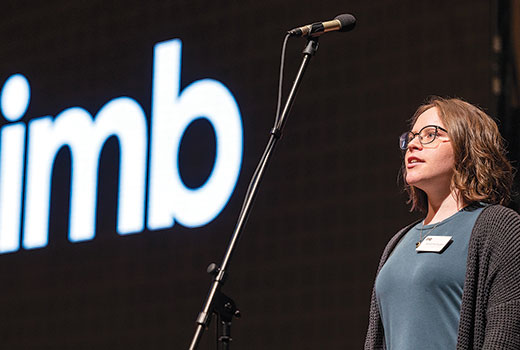 Samantha Burgess, a former Hands On and Macedonia Project missionary, shares her testimony at a Nov. 8 Sending Celebration. She’ll be going to Prague as a career missionary this spring. (IMB Photo)

God’s ‘Worthiness’ Being Made Known in Prague

Samantha Burgess started to consider long-term missions in junior high. Throughout high school and college, God began to shape her calling through short-term missions to Guatemala, Colombia and African deserts.

“The Lord used these trips to broaden my understanding of His desire for the nations to know Him and of His worthiness of being made known,” Burgess said.

At a conference her freshman year of college, she gave God a “blank check to do with whatever He wills. I came back from that conference intentionally pursuing a path to long-term missions and asking my church to confirm that call in me and to walk with me in it,” she said.

This blank check led her to serve with the IMB’s Hands On program in Prague for a semester in college, and later with the IMB’s Macedonia Project in the same city.

Burgess will be returning to Prague in the spring, serving with a church-planting team in an area of the city with very little evangelical influence.

God’s Miracles Opening the Door to Fulfill His Mission

Both Jeff and Lainey Johnson felt God’s distinct call to missions through short-term trips, including an eight-month volunteer trip to Uganda. 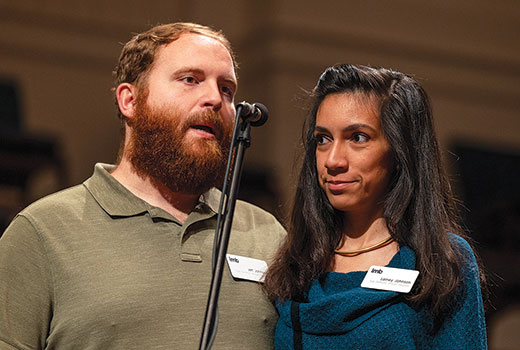 Jeff and Lainey Johnson, along with their kids, will be going to Nairobi, Kenya, to work in the slums and with refugees. (IMB Photo)

Though the couple knew they were called to missions, they started to question God’s plan when they found out their son, Elijah, was diagnosed with spina bifida.

“When my son was diagnosed with spina bifida, we were devastated for so many reasons, and one of those reasons was that we may never get to do international missions again,” Lainey said.

“I remember asking the Lord why He put such a strong desire in my heart and my husband’s heart since we were children to end up not being able to go. I am beyond thankful for the Lord’s patience toward me.”

Three days after their son underwent fetal surgery, Lainey turned to Jeff and said, “We can still do missions. The Lord has displayed His hand over and over, and He has proven Himself faithful. If He wills it, He can make a way!”

They continued to receive good reports from doctors regarding Elijah’s progress, and God opened doors for them to serve long-term with the IMB.

The couple, along with their children, Josias, Arrow and Elijah, will be engaging refugees and underserved communities in Kenya in the spring.

— Myriah Snyder is senior writer for the International Mission Board.