When Igor Vovk’s family moved to South Carolina in 2020, he found a big population of Slavic people in the Upstate, but not many Slavic churches. So, Vovk and a group of friends started gathering in different homes to study God’s Word together.

Their group quickly grew in size, and a second Bible study group was formed so everyone could attend, Vovk said. The two groups continued to grow, and they soon realized a need to start a church where they all could meet together. And the Upstate Family Baptist Church — the newest Slavic congregation in the South Carolina Baptist Convention — was born. 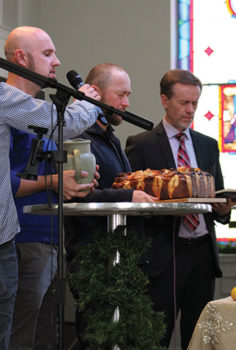 Elders Igor Vovk and Igor Bondarev
and Pastor Willi Dueck (l to r) express thanks to God for water, bread and the Word of God during a service.

“We have been gathering for a year, and our church has grown to around 150 adults attending each Sunday, plus children,” Vovk said. A variety of countries are represented — Ukraine, Russia, Belarus, Uzbekistan, Kazakhstan, Kyrgyzstan and Moldova, he added.

The fledgling congregation recently called a pastor, Willi Dueck, and is planning to connect with the Spartanburg County Baptist Network. The congregation meets on Sundays at noon at Hub City Church.

“As of right now, our church is buzzing with activity,” Vovk said. “We have seven community groups — a youth group, teenage girls group, Sunday school, women’s Bible study and prayer meetings, men’s prayer meeting, and worship nights for English-speaking youth and their friends.”

The church has begun a new outreach to evangelize the local Slavic community, Vovk said. “One of the great ways to do so is by serving the immigrants, who are just arriving from the former Soviet Union and are in need of help,” he said. “As we step in to serve their needs, we get a chance to share the gospel and invite them to our Sunday services.”

Vovk understands their situation well. He was born in the Soviet Union, in what is now known as the Ukraine. His family moved to Siberia, behind the Polar Circle, when he was 6 months old.

His parents attended church while he was growing up, Vovk recalled, adding, “It was always a part of my life.” He especially remembers the faith of his grandmother, whom he called “a prayer warrior.” Vovk gave his life to Christ when he was 16. 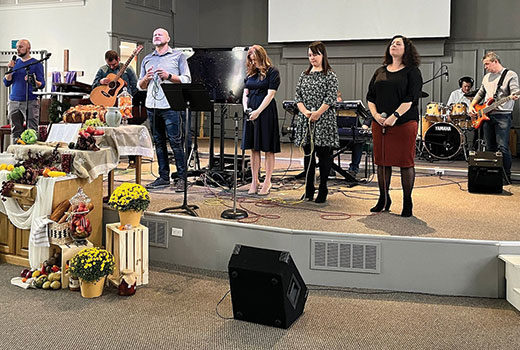 A praise team leads the congregation in worship.

He and his wife moved to the United States in 2007, when he was 18 years old, first living in Sacramento, Calif., before moving to South Carolina in December 2020.

Vovk believes it is important for South Carolina Baptists to reach out to Russians and other nationalities and ethnicities. “Many of them are unchurched,” he said. “As our Slavic church grows, we see the need to share the gospel among those who do not know the Lord.”

SCBC Multi-ethnic Ministry Specialist Ryan Dupree said he finds it “incredible and exciting” to partner with key leaders, like Vovk, in reaching the various Diaspora communities in South Carolina to fulfill the Great Commission.

“It excites me to see new ethnic churches planted in these communities that are filling emotional and spiritual voids in the lives of others from their countries through the gospel and a relationship with Jesus,” he said.